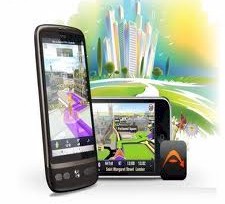 When looking for any indication that there is significant progress and maturity within a new industry, you don’t have to look much farther than the influences of advertising. Where there’s money to be made, advertising will usually sink their dirty little claws when the time is ripe.

Everything from magazines, to website banners, radio and television, to billboard advertising, these are the engines that drives and influences micro-economies. It is really no different in the mobile device market. One particular sector in Mobile Advertising that’s expected to expand and generate millions of dollars in ‘ad’ revenue, is mobile applications advertising.

Advertising On Mobile Applications
These mobile application ‘ads’ will usually appear in either a ‘pop-up’ at the beginning or launch of an application, or as a tiny banner overlay on the viewing area of the application itself. These ads are most commonly distributed through online ad agencies, thus making advertising accessible to any advertiser who’s interested in capturing the mobile crowd.

When Apple acquired mobile ad network Quattro, and Google’s acquisition of AdMob, mobile advertising officially entered the ‘big time’ for marketers. Most agencies has also now realized the huge potential of mobile advertising, as they view it as the next frontier.

How Big Will Mobile Advertising Be?
So just how big and expansive can we expect this new frontier to be? Well, considering that most of the smartphones and tablets released are already app-ready, the opportunities should be absolutely massive.

With almost anything that’s app-related, look for Apple to dominate this market with iAd, which is their advertising solution, and the standard for iPad and iPhone apps. Although iAd may have its critics, it is without a doubt an innovator in mobile marketing. Everyone can learn from the creative measures that they take with their platform. There are already competitors however, who are busy working on alternatives.

On the opposite end of the spectrum, for those who are and forever will be opposed to Apple, and their exclusive proprietary snobbery, there is also a variety of apps that are available through: Android, Palm and BlackBerry amongst others. So the market is completely wide open for advertising on these app’s and platforms, as there are plenty of available open systems for developers.

Currently, the majority of mobile carriers work alongside Jumptap, indicating that there indeed is a huge marketplace beyond Apple. The Android OS created by Google, is now actually more popular than Apple because it’s adaptable and usable across multiple devices.

Developers can expect to earn income from advertising on app’s through a revenue-sharing basis. Developers on Apple’s iAd for example, will see a 60/40% percent share of the revenue. If the explosive growth of mobile advertising itself is any indication, these developers, as well as advertisers can expect to see plenty of action.

So now is the time to get in and start testing and learning as much as possible before it goes absolute mainstream. The later you wait, the later you begin testing your campaigns, the higher the price becomes. So gain some experience in this market now, so when the time is appropriate, you can scale accordingly.

The Cost Of Advertising
Advertising on apps can vary, CPMs can currently be as low as $2 to over $25, with the main reason in prices being the app or property that’s being advertised in, as well as how many targeted parameters are used. So things like geo-targeting and demo targeting will increase the CPM that the advertiser will pay, as the mobile audience is a lot more targeted within the app.

Advertising On Mobile Apps Compared To Traditional Website Advertising
Although the basic units of text, banners and rich media are quite similar, mobile advertising does however offer certain unique characteristics. One is that there is usually a lot less clutter on mobile devices, showing just one or two ads displayed per page. Also, the personalized nature of mobile, and the ability to be a lot more geo-location specific, has shown engagement rates of 10 to 100 times better than conventional PC Web advertising.