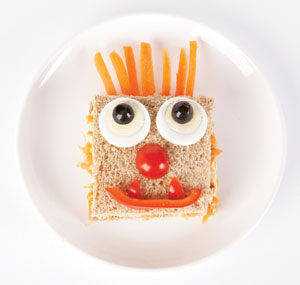 It’s true that just yesterday in your Dear Diary Health Blog, you confessed that you ate 4 chocolate chip cookies which you shouldn’t have. Not that you were particularly hungry, but because they were just sitting there, smelling succulent, right in front of you.

The majority of us on occasion will eat more than we should, on impulse, this simply because we can, and who’s going to know, right? It’s the easiest path to least resistance which is that piece of chocolate cake that’s on your plate, seeking a target directly into your mouth.

So social scientists, who study food behavior choices, recently posed the following questions: “Why do individuals eat more than they should, when they know they shouldn’t?” and “How do parents motivate their kids to eat healthier, especially while away from home, such as the local food fair or at the school cafeteria?”

There are actually a few proven tips and techniques that our entire family can be forced to make when it comes to making better and healthier food eating choices. Some of these methods have been actually used in school lunchrooms, which can also be adapted and applied at home, particularly if you yourself or your kids are wanting a better diet, and are constantly overeating the wrong foods.

How To Trick Others To Eating Healthier Food

Make Eating Healthier Food Fun
Your local supermarket produce displays will purposely place ripe colorful fruits and vegetables in attractive bowls, instead of leaving them in a boring cardboard box carton or crate, this simply because it increases sales.

The reason is because eating healthy is often associated with being drab and boring. So you can easily change this perception at home once you begin finding different and fun ways of eating healthier.

Give Food A Fancy New Cool Name
One method of making better and healthier food choices can be as easy as giving it a delicious new name, making them more mouth watering edible. For instance, you can make your own fresh and nutritious homemade bean burritos, and rename them, “The Big Boy Lean Mean Bean Burritos,” the kids will love the theme night.

This experiment is actually used as well as tested at local school cafeterias, and the foods which were renamed to sound delicious, often instantly sell out.

Carrots are usually a bland and boring food by themselves, but if you reintroduce them to your kids as “sticks that gives you x-ray vision,” the new name should bring a new fascination.

Research has proven that people will more than likely choose foods which have fancier names. There’s no reason to choose an everyday common vegetable dish, when you have the option to eat the “Assorted Spring Veggie Medley.” Restaurants when naming their bland dishes are renown for this.

Making Healthy Food The First Choice
You can do so by placing the cookies, the chocolate bar, or a bag of chips in harder to reach spots in the fridge, or place them higher on the cupboard shelves. People by nature will usually tend to grab and take what’s right in front of them.

So make sure that your place the apples, or celery sticks, easy to reach, making it their first choice, while forcing everyone to reach or work at lot harder for those box of cookies.

There are those who will also instantly assume that the food which is placed openly on display is the best that the restaurant, or your kitchen has to offer.

One test found that just by moving the chocolate milk so it would be harder to reach, while placing the skim milk easily within reach, the majority of students at the cafeteria actually bought the regular milk instead.

Those Cool Soothing Tall Drinks
When it comes to those drinks which are unhealthy, try using taller slimmer glasses. This is a well known illusion that’s used in the restaurant industry, which you can try yourself.

When you compare two exact glasses of different heights, most will be in disbelief once they find out that they hold the exact same volume of liquid. The only difference being one’s taller than the other.

There’s a perception that most think taller glasses will hold more volume that the short stubby or wider glasses will. So when you serve beverages in a tall glass, it will actually lead people to believe they drank a lot more than they actually did, making them feel fuller, and less likely to refill up when it comes to the next round.

Try The Taste Test
You can try and test out some or all of these tips, especially if you need to resist having that extra beer, or eat those readily available cookies which are at arms length away on the shelf.

These tips and tricks are exactly what savvy retailers, smart moms, and successful restaurants use to encourage and promote eating healthier food or buying more product. Variations and twists work well, so why not give it a try yourself just to get your family or yourself to eat healthier.

Knowing, learning, and recognizing while at times avoiding these tactics which are designed to influence your choices, may be just as important as you putting them to work yourself.