What Colors Mean And How They Influence Your Decisions 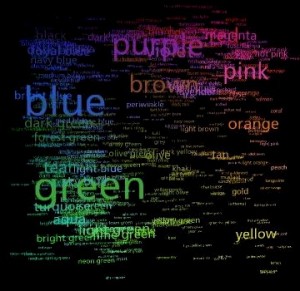 When it comes to babies, Colors, the rainbow variety of them, is the first thing that they recognize, they realizing the vividness and the abstracts of the world around them. They’re attracted and respond to what they like. Color then becomes an important cog in their social acceptance and mental development.

There are the recognizable primary colors which are universally dominant and symbolic, such as: red meaning stop or danger, green meaning go, and the shades of yellow meaning caution, which are the colors of a stoplight, directing traffic. Sure, these everyday warning signals can be administered by using just black, gray, and white, since the writing and their translations would still be the same, but using different colors are a lot easier to alert drivers about the different messages or conditions.

The use of different colors are also prevalent when it comes to corporate logos, advertising, schools, and office buildings, along with other numerous applications.

Perhaps the biggest impact that color has on individuals is food, where based on color, people are willing to eat a certain food or not. There was a time that Heinz, and their staple condiment ketchup, tried green ketchup instead of the traditional red.

They soon gave up that marketing test since consumers would not believe that there was such a thing as green ketchup, even though it tasted exactly the same. Would Yuri for example be addicted to green or purple ketchup.

The Color Purpose
Colors aren’t just symbolic or used to describe a process. There’s also strong evidence that colors are one of the biggest external influences when it comes to altering someones mood.

What the human brain does is it associates colors that they see in nature first, such as the various shades of green. Interior decorators has long known that color can dramatically affect one’s mood and their emotions.

It’s one of the most powerful nonverbal communication tools available to cause a physiological reaction. Colors can also elevate blood pressure, cause strain on the eyes, or increase one’s metabolism levels.

So What These Colors Mean
There’s an universal agreement that different colors associates various mental as well as emotional reactions based on the specific color. So the following are the most common colors, and what their direct connections and reactions are with specific human emotions.

The Color Red
To some, red is considered the most outrageous when it comes to color. What red represents is authority and strength. It can also have a stimulating effect, which has been proven to increase activity of the adrenal glands of the brain.

While activating this particular adrenaline can boost motivation while getting rid of any negative thoughts, it can also make one feel more irritable as well.

Although red can affect the mood of both sexes, women will tend to respond to red with a lot more intensity. What it does is it increases the likelihood of impulsive shopping. So now you know why all the “SALE” signs are red.

The Beauty Of Blue
What blue does is it portrays a sense of healing, this since just the sight of it instinctively causes the brain to produce and activate certain calming chemicals.

Blue is also known to be able to curb appetite. There aren’t many foods which are naturally blue, other than blueberries or eggplants. So because of this, once we see different shades of blue, we then subconsciously think that we shouldn’t eat as much.

Those who are attempting to lose weight are known to paint their rooms blue, this to keep themselves from getting hungry. What blue also implies is loyalty and royalty, as this is the reason why politicians and businessmen will wear different shades or blue or navy.

Grass Is Green
Green is known as the color of balance and nature. Green also instills people with the feeling of relaxation as well as harmony. This color portrays the great outdoors, youthfulness, sustainability and renewal.

The various shades of green is also the most soothing color for the eyes, and just observing it has proven to help slow down one’s heart and breathing rate.

Then There’s Yellow
Yellow is bold and aggressive, so as a result, at times, it can make people feel more tired and fatigued, quicker. It’s one of the brightest colors and as a result, once it’s reflected, it can easily irritate the eyes. When looking at yellow, the eyes will begin to feel heavy, which then turns into tiredness.

Orange Not The Fruit
Orange happens to be an extremely positive happy color that’s known to be able to boost one’s self-esteem. It portrays the feeling of vigor and youthfulness. The color orange will also stimulate the digestive system while promoting hunger.

So this color is used in restaurants, hello “McD,” who are attempting to sell certain foods, or for getting fussy kids to eat their veggies. Males are also usually drawn more to this color than they are to red.

Brown Is Natural
What brown, similar to green, does is it signifies nature and the earth. What brown does is it makes people visualize their home, providing comfort as well as security while boosting their confidence.

So because of this, it gives individuals the willingness to talk more, open up and have deeper conversations. Men are generally attracted to brown more than women are. Salesman selling cars or appliances are usually known to wear brown.

The Color Purple
Purple is considered unique, an enigma, this because it’s found rarely in nature, other than the occasional fruit or vegetable. This is most likely the reason why it’s usually attributed to royalty.

The influences of purple are also known to alleviate fear and nervousness. It’s the color of spirituality in some circles as it signifies an individual’s connection with the almighty forms of a higher power. Purple also signifies creativity.

Pretty In Pink
Pink is usually associated as a shade of red, but what pink actually does is it activates a completely opposite set of emotions in the individual. What pink represents is love and sensitivity, as it makes people feel calmer and safer. While red exudes sensuality, pink is more unselfish and caring.

Back To Basic Black
Black is considered the absence of color, which means there’s no stimulating or calming effects to basic black. For this very reason, black will generally make people feel more depressed than any other color.

It’s also believed that too much exposure to black can prevent or promote any positive changes or growth. What black does is it consumes, absorbs, and hides. Blackness evokes the underground. Wearing black also makes you appear thinner.

What About White
White on the other hand is completely transparent, a complete circle away from black. It has an extremely tranquil hue in its presence. Individuals will usually view any white object as completely dove pure, clean, refreshing, void, and liquid.

The Symbolism Of Color
Different colors also have various symbolic meanings when it comes to different cultures. For instance, white is traditionally the color for weddings in the Western world because of it’s purity symbolism and a new beginning. But in Chinese culture, white is used traditionally for funerals.

The color red is usually associated with rage when it comes to North American’s, but it transfers as happiness, fortune, and luck in China.

When it comes to fashion, traditionally, boys are usually dressed in blue, while the girls are dressed in shades of pink. But symbolically, these colors are not usually shared as a fashion statement by other cultures from around the world.

How Slowing Down The Pace Of Life Can Improve Your Health

Recognizing The Fears Which Are Holding Back Your Success