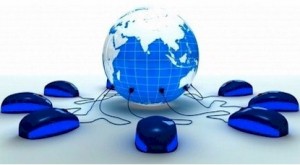 So you’ve probably heard about Cloud Computing, but aren’t quite sure what it means? Well, we all know that the home and work based PC computer has been around for a few decades or so now, and every year, there has been new and exciting advancements that take place. They’re getting faster in speed, smaller in size and more expensive and complex to run. Also trying to keep up with the newest trends can become rather quite expensive.

As new or upgraded software usually requires newer faster hardware, or conversely, upgrading that hardware can make the software obsolete, incompatible or slow. Keeping a PC updated, can become quite time and money consuming. There can also be a significant learning curve required when installing these new programs or devices in a computer system or network.

So What The Heck Is Cloud Computing?
One of the newer ‘buzz’ words and catch-phrases that’s been bandied about by technology experts, companies and Internet users is “Cloud Computing”. Cloud computing promises to offer numerous solutions for worldwide computer users, as well as those who are working in conditions that’s becoming decentralized.

The basic core concept behind ‘Cloud Computing’ is that ‘multi’ PC based computer users can access safe and legal software programs, as well as files stored in a “cloud.” A cloud being a situation where these programs and related files/data are not stored in a specific place. In fact, the exact location of the software and the file data, based on Cloud Computing theory, is unknown, unspecified and in non-static floating locations.

Cloud Computing Architecture
Cloud Computing is solely dependent on a certain architecture. The principle components of this architecture is the front end, where the computer user can access the cloud, and the cloud itself, which is the back end. This back end consists of a collection of servers, computers, and data storage devices in virtual anonymity.

The users will be able to access software programs or retrieve saved company data using a web interface, which relays information back and forth to the cloud. The magic occurs in the cloud itself. The back end systems that makes up the cloud allocates resources to each user when the information is called, allowing for scalable and flexible usage.

Piracy Can Be A Problem
Another major problem, particularly if you’re using the PC platform, is that unfortunately a lot of piracy occurs. While companies and individuals valiantly try to slow down or stop the efforts of piracy, it will forever remain a major problem in the industry, not to mention the cost increases for legitimate users.

As the Internet continues to grow in every corner of the world, there are those who are attempting to provide a solution, not only to the piracy problem, but also to the constant upgrading that’s required, as well as the purchasing of expensive software.

Cloud computing refers to a virtual computing service by an external source, which is available on an on-demand basis, where users are provided with computing resources, such as software applications, stored data and services accessible through the Internet.

Example: If a medical clinic or a law firm requires a software solution to maintain their client or patient records billing and appointments system, they would need to buy an in-house server, set up a network with a software solution, usually bearing huge installation costs. Also, these firms would have to pay out monthly maintenance costs for the hardware, and pay additional salaries for various IT professionals such as: a project manager, network engineer and other IT technicians.

Using cloud computing, the clinic or law firm can just opt for a monthly or yearly plan from an Internet based ‘Cloud Computing’ service provider. So the entire software solution that’s required is remotely hosted by virtual third party servers, and are accessible through the Internet from any location on the planet with an Internet access.

The cloud service is securely managed 100% by the provider, (the data, files, software and the applications), and the firms do not own any physical hardware infrastructure, nor the payroll to support them. The customers just pay a fee for what they use, similar to a phone connection.

Cloud computing, unlike conventional computing, operates on a larger scale. It’s extremely efficient in the way it will deliver, integrate and manages applications. Clouding is also beneficial for hosting services providers as well.

A computer cloud can be either private or public. A public cloud, also referred to as an external cloud, is available to anyone online with an internet connection. A private cloud on the other hand is a closed system, only available to a few users. There are also hybrid clouds or virtual private clouds, where a private service provider will use a public cloud to offer services.

Although cloud computing may still be a relatively new concept, it is gaining popularity due to its affordability benefits. Clouds will reduce costs as well as giving the advantage of storing information that’s assessable to anyone, anywhere in the world. All the major technology players are now offering some type of cloud computing service, as it is cheaper than the traditional software solutions purchased from a vendor. Each cloud computing provider also offers their own billing method, allowing you further flexibility.

The Advantages Of Cloud Computing
Since the infrastructure of running the programs that’s used is not solely dependent on the user, but the cloud itself, a more agile and flexible work-flow is created. Another advantage is that using these individual computers in a cloud system does not depend on the system being used, or the location being known. This is because the stored data for both the users and the program saved files are remotely located in the cloud itself, somewhere in cyber-space. All that the user needs is a secure Internet access to use the programs. This can be easily done by any web-capable device such as: smartphones, tablets, notebooks or desktop computers.

Since this is an internal communal network, the costs are believed to be much lower when using Cloud Computing. This is because the end user does not require any further hardware or software purchases or upgrades, other than the web device itself, when accessing and using the software programs.

The application programs themselves are more inexpensive as well, as most of the Cloud Computing companies that are participating use either a metered system, where the user pays only for the amount of usage during a given time frame, or a subscription based fee system. Instead of the Internet user having to pay for entire software suites that usually contain programs they don’t need or use, Cloud Computing will allow for a more efficient “pay for only what you use” based economy.

These programs will also be available to any user who has Internet access, meaning that decentralized companies who are not using a central office, will be able to share the same software, while networking with each other and accessing the same data, even if they are spread anywhere across the globe or city.

Clouds Are A Lot More Affordable
Since the programs do not reside on the user’s computer, the maintenance, the installation and upgrading of these software programs are virtually non-existent. Also, user support for these programs will happen almost immediate, rather than having to call an online customer support person or having your hand held through a process of repairing or upgrading a program. The user can get instant assistance by reporting problems directly to those who are maintaining the cloud.

The user will also be notified immediately of any changes in the programs, upgrades or maintenance in real time. If the cloud is set up properly at the back end, the reliability of the programs should be high, and system failures should be non existent.

The Future Of Cloud Computing
While there are a lot of fans of Cloud Computing, as there are numerous Fortune 500 companies as well as universities that are dedicating massive amounts of research into the concept, cloud computing also has a lot of detractors and critics.

There are some that have accused these companies of using these systems and infrastructures that already exists, and are just re-branding them under a new ‘catch-phrase’ that is ‘Cloud Computing, strictly for marketing purposes. But the CEO of Oracle Corporation, Mr. Larry Ellison viewed this differently, saying that although it’s true Cloud Computing already represents everything that his company already does, and it’s also true that they would only have to change a few words on their advertisements. But he also feels that Cloud Computing will ultimately be the solution for a greener, more inexpensive, a more reliable and efficient distribution system for his software.

There are also others who believe that Cloud Computing could eventually be revolutionary in the long term, but is over-hyped and a bit misunderstood in the immediate short term. The belief is there needs to be a concerted transitional shift in thinking patterns and computing habits, and not a quick sudden transformation.

Whatever the case, there is a lot of thought and energy that’s going into this idea. As there is no doubt that Cloud Computing will inevitably become a lot more popular, as users will eventually adapt their working habits to fit their lifestyles, as well as look for more economical solutions to IT. Cloud Computing will not be for everyone, and some of the functions may not be available for a while, but it’s hard to ignore the attention being paid to this concept from the public and private sectors.

Although it’s not yet known if and when the entire Internet will adopt Cloud Computing, but eliminating expensive store-bought software, while making access to information almost limitless and affordable to anyone, the idea to many makes it seem a lot more conceivable.

The fact remains however, that if Cloud Computing is brought to fruition, it would be a powerful asset that will empower a lot of people, saving them money, time and effort, while giving them easier access to resources they may of not had before. The biggest impact of this plan would be on the education system and for disadvantaged communities who would not otherwise have access to this type of information or software.