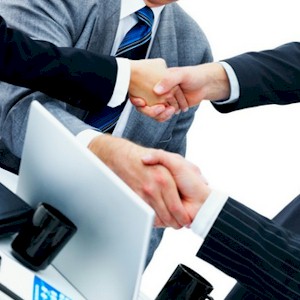 What anyone anywhere, any deal regardless of its size, scope, or nature wants is some type of a resolution, it needs to be closed, a done deal shut.

The most ideal is it to be an equatable win-win solution, where both parties walk away from the table satisfied. But the reality and problem is that this middle ground, this gap is usually wide spread.

The majority of these businesses or individuals when it comes to their dealings are too competitive and become bullheaded, their ego gets in the way, and they want to knock each other out for the win. What they want to do is clean their opponents clock by having a landslide victory, go for a formidable one-sided knockout deal in their favor.

This even once you go into negotiations with your best intentions in mind, wanting to make a deal, assuming that their counterpart has the same intention, that the other party is also looking for a fair equitable resolve as well.

Negotiating usually ends in a stalemate since either side will budge. The key to settling these situation is by thinking out of the box, this by increasing the size of the pie.

To accomplish this, you need to view the negotiation process as a way of expanding the deal by introducing different issues which both parties want, but may have failed to realize, this prior to before the negotiating process begins.

Bringing In New Issues Of Resolve Difficult Negotiations
Laying Out The Issues On The Table
Once you begin saying things such as “Me, or my company’s position is” or “this is my position,” what you’re doing is attempting to take ownership of that position. This then makes the position as a part of your identity, which then makes it more difficult to abandon or change them.

So rather than attempting to own a position on an issue, project it into a problem which both of you are willing to solve together. For instance, say , “Once we find a solution to this idea which would work for both of us,” then you’re involving everyone.

What you’re doing is turning the negotiation into more of a problem solving session, rather than attempting to hammer something out. Doing so also helps each other on how you should be going forward, this rather than coming to a stalemate.

Introducing Alternative Objectives
Begin creating new alternatives rather than transcending competitive negotiating tactics, this by introducing new independent facts which can define or alter the parameters of the agreement.

Some of these facts may include new trends in the market, specific industry performance, estimates of market value, or new credible third-party research.

Once both parties agree on these new standards, it then becomes easier for everyone involved to be able to evaluate a proposal from a point of common ground.

For instance, if the party that you’re dealing with needs to go back to their manager to convince them that the deal is a good one, then using an independent standard such as a recognized industry publication, should be able to reinforce and justify the price.

Always Be On Their Side
When negotiating in your office or a boardroom, make sure that you always sit on the same side of the table, not metaphorically, but physically do so.

When sitting across from someone, what you’re doing is creating a barrier, a fence, and all that does is it creates a sense of competition.

In any business situation, there’s always a distinct difference between those who are working together, and those who are directly competing against each other.

When there’s no sense of competition, people will usually sit next to each other, and at times there’s even touching and sharing, which usually leads to reaching a higher level of mutual understanding.

So under any negotiating situation, it’s a good idea to position yourself right beside your client, which encourages both of you to work together towards a common goal, making it more likely to become a win-win situation.

Always Be Asking “Why” Instead Of “What.”
Once you understand what the motivation behind the negotiating position is, what that allows for is both parties to be able to come up with alternative solutions to the core issues which is creating the stalemate.

For instance, if someone insists on just getting the lowest possible price, then you need to decide on the reason “why,” as you may discover that the reason is because they’re experiencing a cash flow issue.

Once you discover why, then you can both work together to resolve this by minimizing the effects of purchasing the item, such as financing, even if it’s at a higher price.

Always Have A Secondary Plan
When entering into any negotiation, make sure that you always have an alternate backup plan which you can activate, this if you both fail to initially reach some type of agreement.

For instance, you’re currently negotiating with someone who just isn’t willing to pay what you’re asking for, even if your price is so low that you’ll break even, and not make a profit.

If this is the case, you’ll need to maintain contact with them while continuing to investigate different opportunities and solutions to work together.

Once you have an acceptable alternative to a negotiation agreement, what that does is it frees you from the limiting perspective, which is that you need to close the deal regardless, which releases you to be able to negotiate without fear, or the feeling of losing.