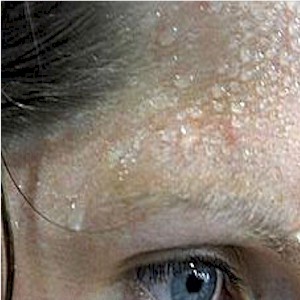 There you are alone, by yourself, at the annual Christmas party or company picnic, your arms crossed while your hands are in a cold shaky sweat.

You’re experiencing social anxiety, the feeling that everyone is evaluating you negatively, that your every move and gesture is magnified.

You could be there sitting and waiting for that job interview, meeting someone for the first time, or making a speech in front of a group of strangers. The feeling of social anxiety can become debilitating.

This can cause you to stumble on every word that’s spoken, or worse, your mind can go completely blank as it goes into temporary shock. There is some resolve however on why this happens, and a way to avoid these unwanted situations which social anxiety can serve up.

What you need to do is actively think consciously about the upcoming potentially stressful situation. For instance, think about what type of arousal that occurs when these situations occur, such as your forehead or underarms beginning to sweat, your voice trembles, a rapidly beating heart, cold sweaty hands, etc.

It’s been thought that those who may be under socially anxious situations can potentially benefit by rethinking, and then re-channeling the stress that they’re experiencing.

Isolating Social Anxiety Situations
Begin by realizing that you have higher levels of social anxiety which can also be considered a mood disorder, and challenge yourself to a series of cognitive challenges.

There was a recent study where a group of individuals who were thought to have high social anxiety issues, were asked to give a short speech regarding their personal strengths and weaknesses.

They were told that the speech would be videotaped, and that they had five minutes to prepare. These parameters would be a stressful situation for almost anyone, and more so for those who experience social anxiety.

Thinking About The Speech
To determine whether anything could be done regarding the high stress levels of the situation, before they began preparing for their speech, the volunteers were given specific tips for how to handle their anxious reactions.

They were told that when under stress such as public speaking, what our bodies will do is react in a specific way, and that the increase in arousal which they’ll feel during these stressful times, isn’t harmful to their health.

They were told that these types of responses evolved from when our ancestors were able to survive, by pumping oxygen into the areas of the body where it was needed.

So what was encouraged was to reinterpret the signals the body was giving out during the public speaking task, and then treating it as a beneficial or a learning experience.

It became obvious who the socially anxious people were, and those who were less anxious when giving their speech. Those who took the suggestions regarding their stressful reactions to heart, experienced less stress.

Being Aware Of Stressful Situations
There also wasn’t any visible differences or cues in the physiological responses to the speaking situation when it came to they feeling social anxiety. This may not be that surprising since giving any speech is somewhat stressful to anyone.

What did differ however was the degree of the anxiety that this particular situation delivered. Although their bodily reactions weren’t that different, those who were more socially anxious reported that they felt more stress regarding the speech.

Those Who Were Coached And Made Aware Of The Social Anxiety
So the results once these individuals were provided with tips on how to rethink their arousal before the speech, the views of the situation then changed for some.

They reported that the public speaking situation was still stressful, but they also believed that they had better resources and control to be able to cope with the situation better, than those who didn’t receive the reframing tips.

Those who were given the instructions to reframe, also showed improvement in their physiological responses when it came to their evaluative stress levels. So the benefits of the reframing process were both somewhat experienced for those who were extremely socially anxious, and for those who generally weren’t.

The Issue That Is Social Anxiety
Social Anxiety is considered as one of the most prevalent of mental disorders, which can affect up to 19% percent of the general population at some point in their lives.

As the researchers noted, the reappraisal techniques that they administered may not be the ultimate solution for treatment of the anxiety, but it does appear to be a tool which people could use under these situations.

It’s also a method to be use which may help anyone to feel as well as perform at their very best under any situation, or whenever they feel anxiety.

Know What The Four Key Motivators Are For You To Succeed