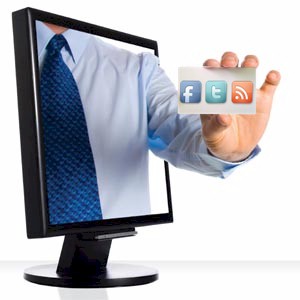 Perhaps the most common reason why businesses are a little hesitant as well as skeptical of pursing and adopting the various methods of Social Media for their company is because they’re afraid of losing control. However, in the virtual world that we now live in, where Facebook and Twitter absolutely dominates the Internet, they now play a key role in any political or sociological revolution or statement. This is similar to the control which these companies and their once strong armed tactics exerted over their employees in the past. So the tables have turned.

[ad#co-1]
If any of the recent research regarding the attitudes of executives towards social based media is any indicator, it’s an illusion which the majority of companies are now quickly shedding. It was found that there are now more than 60% percent of respondents who believe that businesses of any size needs to be somewhat social to function better.

65% percent of these respondents listed instilling some type of social media strategy and their participation as a “high priority” issue for them, while just over 50% percent were extremely confident in their current social media efforts.

So basically, it appears that the majority of companies are indeed going social, in one way or another. Listed are reasons why businesses who may be on the ledge should be actively adopting social media.

Customer And Employee Engagement
Social media opens up the potential for business owners to be able to listen as well as engage in direct employee as well as customer conversations. One of the biggest and immediate benefits of doing so opens up the the ability to pinpoint a more accurate and transparent profile when it comes to customers. This should enable marketers along with their sales reps to be able to share this information a lot more efficiently when following up with leads.

Potential Of Immediate Innovation
Social media opens up the window to be able to instantly collaborate in all directions, this all in real time, which fosters innovation. With the frequency that’s offered, this results in a group effort rather than just the brilliance of one person.

Social Media Is Now More Secure
The improvements regarding better security has recently progressed significantly to the point where the companies which are in the higher risk sectors, such as the financial market and services, are now feeling a lot more comfortable with social related collaborating technologies.

Collaborating Technologies
The ease of release. Collaborative technologies, which are primarily cloud based and deployed, are now extremely easy to scale up if needed, or if the value is there. It’s also easier to just release the service if you’re not satisfied with them.

Everyone’s Now Expecting Social Media
Absolutely everyone, employees, consumers and vendors are now now expecting some form of social media presence. Social media has now become so directly woven now into the fabric of all phases of society and business that we may even eventually cease to refer it as “social,” in the near future.

This is because it will be just another part of everyday virtual life. Consumers, along with their staff and the IT department now expect enterprises of all sizes, who they work with or work for, buy from or sell to, to be somewhat social media present as a form of immediate communication.

For business owners, the adoption of social media poses numerous implications, which is also beginning to blur the distinction between what’s IT and what’s not IT. As every employee is becoming thoroughly immersed in all things technology, previous “tech” based positions has now become a lot more involved directly in the everyday business itself.

For instance, consider the IT staff such as the application developers who may of in the past been involved with just supporting the back-end hardware and the software of the company. They are now also fully immersed in the design of marketing related apps as well.

Would this then make these previous “techies” marketing professionals, or are they still IT professionals who multitask. This conundrum is most likely just the tip of the virtual iceberg.

It will be up to the business owner who’ll decide as well as manage this transition. They need to determine whether their companies will reap the benefits of collaboration, or rather experience chaos.

How To Influence Consumers And Reach Readers Using Twitter