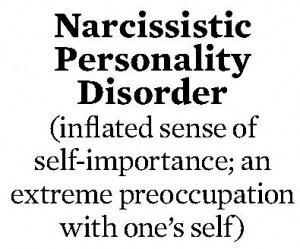 Narcissists exists, they are everywhere, you may even know of one specifically. They are the ones who are usually and typically completely self-absorbed into how great they are, they see themselves by far “head and shoulders” superior from absolutely everyone else. Some may lack empathy while displaying arrogance and a big yet fragile ego. They show disdain toward others when they’re challenged, interrupted or questioned.

When others don’t bother to treat them as a superior or insults them in some way, they will get that “How Dare You” look on their face. They will get upset by this direct opposition feedback challenging their opinion, statements or their annoying behavior.

[ad#co-1]
They’re constantly oblivious of the effect that they place on others. They also expect others will view them as “better than them,” and thus they’re entitled to special attention, privileges or treatment. They are usually caught by surprise when others become offended by their behavior, this must surely remind you of someone.

Research has also identified that there are two general subtypes of a narcissist personality. For purposes of practicality, they are broken down as grandiose or invulnerable or a vulnerable narcissists.

The Invulnerable Narcissist
Invulnerable narcissists will usually tend to be less sensitive and a lot more confident and bold about themselves. They genuinely think and believe that they’re a lot more superior than anyone else and will actually seek revenge or go into some kind of a rage against those who doesn’t treat them as they expect, which is a superior being. This also occurs when they receive some type of negative feedback as well.

They seem to have no sense of shame regarding themselves or their behavior while displaying their big annoying ego at will. Their parents or some peers may have at one time treated them or told them that they are “God Like” superior to absolutely everyone else, so they feel they’re not compensating for anything. They are acting out their own natural egotistical expectations.

They don’t care as much about anyone else, including their partners, who will at times even walk out of the relationship if they feel they’re not given the respect or the admiration which they feel they deserve.

They will openly flaunt themselves in front everyone, while priding themselves on as many people who will listen to how wonderful and knowledgeable they are. They can at times when challenged become aggressive and seek dominance without showing any empathy or remorse whatsoever.

The Vulnerable Narcissist
The vulnerable narcissist… isn’t that an oxymoron? These personalities tend to be a little more sensitive, and will even at times see themselves as victims if someone they face doesn’t understand how superior they are over them.

Similar to those who suffer from Bipolar disorder, narcissists who are vulnerable will always tend to be preoccupied with fears of abandonment and rejection. They will never lend out a helping hand and will reluctantly help only when asked.

They may at times also feel helpless, and at times even depressed and anxious when people don’t bother to treat or view them as they feel they should be treated.

Vulnerable narcissists may appear to be covering up or compensating for low self-esteem issues when they were younger, or some type of shame from early childhood. So they developed their behavior as a coping and protection mechanism so they can deal with neglect or a lack of the parent-child attachment.

They at times will swing back and forth between showing how great they are and feeling hurt, while constantly trying to prove how superior they are to others, themselves or their siblings.

Any effort in attempting to hold them responsible for their behavior may eventually result in a defensive attack or will result in a self-destructive response.

They will often try various methods of getting treated with respect from others, while still remaining in the same relationship. They may even have hidden affairs, yet accuse their partner of straying and may become obsessive about preventing that from ever happening.

Both of these personalities have a few things in common as well, such as the thirst for needing power and control just to fuel their immense but fragile egos. They both lack of empathy, use others by fueling their narcissistic supply, put down, blame and criticize others, while refusing to accept any responsibility.