Focus Be As Effective As Possible Without Wasting Your Time 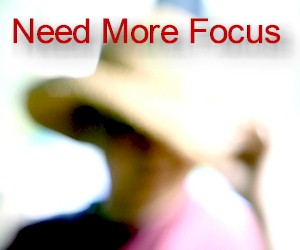 They say that time is money, but there’s some who just don’t care. If you’re wanting to become successful at whatever you’re doing, such as owning your own business, what you need is complete laser like focused dedication, most likely more than you have right now.

If you’re wanting to become a successful entrepreneur, for instance, you need to initially do just one thing, and that’s develop or invent a completely new product or service where there’s currently a need or a void in the market. There are a few caveats to this however.

It has to be a completely innovative solution to an important issue or problem, which is preferably more affordable, or easier to use than what the competition or the market currently offers.

For it to be successful, you’ll need to recoup the initial development costs, which will then justify the investment involved, which also includes the time and capital expenditure. The most important being that you’ll need to completely focus yourself to make all of this happen.

Focus is the key and usually the biggest barrier since it’s always easier said than done. It’s the biggest obstacle which holds most people back, as they lack the drive that’s required.

But if you put your mind to it, and follow a few basic steps, it can also be one of the easiest hurdles to overcome since it’s entirely within your grasp and control.

So to become disciplined, there are a few steps which you can take and implement as soon as possible, this especially if you’re wanting to make it on your own.

How Not To Waste Your Time
• Stop Playing In The Minor Leagues – The most successful of entrepreneurs never do things halfway. They’ll focus on one thing at a time, they go all in at whatever they’re doing, do it correctly, and then follow it through to the end.

So don’t become a serial entrepreneur where you start something, get distracted or lose interest, give up and start something else. Most will claim that they don’t, but doing so is a big ambition killer.

• You’re Always Searching For Positive Reinforcement – If you’re completely lost, then that’s fine as that may be a good way of finding something. But once you do take something on, then make sure that you’re completely passionate about it.

If you’re not, then know it may not be what your looking for. If your tolerance for overcoming obstacles or challenges are low, then that’s a bad sign. What you need to be is a self motivated problem solver instead of someone who constantly complains and needs their hand held.

• You Spend Too Much Time Online – You waste time by getting distracted on Facebook, or you’re constantly trolling on Twitter. You download and play with different useless apps, you continuously email or text pointlessly, while buying every program or software which has a seductive sales page.

Once you stop doing all of these things, you’ll then suddenly find the time to get the things which you need to do.

• You’re Poor At Networking – Establishing valid relationships can be critical to your business success. For this reason, networking becomes key to building and forming important relationships.

But you constantly connect with random strangers online who won’t or can’t help you one bit. Instead, become as focused as possible as just one important relationship with someone in real life can be worth a 1000 Facebook friends.

• You Want Others To Help You – This instead of how you can help someone else. Whether you believe it or not, serving someone can be the way to get your foot in the door for an opportunity.

If you’re constantly thinking, there has to be something in it for me, then realize it’s never about you, it’s about knowing what the motivation of the other person is.

• Your Looking For An Easy Home Run – You’re wanting to win the lottery, you’re always looking for the easy way out, a quick fix as possible. You want to become an instant success and go completely viral overnight. Well, know that these are few and far between and usually takes months to plan out.

• You’re Not Willing To Make Sacrifices – Having all of these hopes and dreams can be great, but one thing which all entrepreneurs that are successful have in common is they’re completely focused on their goal, being absolutely lean and mean.

They’re willing to sacrifice absolutely everything. That’s the key to what keeps them on track, and not always wanting or needing to own things which are tangible.

• You Just Have Bad Ideas – Although there are a myriad of seemingly useless ideas which have made millions for others, such as the “Pet Rock,” or the “Post-It Notes,” know that the majority of these are created by accident, they somehow catch on, go viral, and become a fad.

If your job is to do research, that’s great, but otherwise, focus on finding a genuine need or a problem rather than an invention or a solution. As shallow as what a particular problem may be, it needs to be solved as efficiently as possible.

The Biggest Roadblock To Self Confidence Is Self Doubt

Why Sales Can Be The Greatest Yet Most Insecure Profession