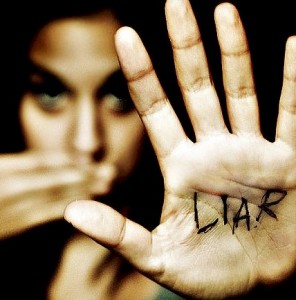 In real life, when in a face to face confrontation, the majority of us are not that skilled or aware enough to tell if someone is lying directly to our face or not. This percentile rises exponentially when we’re attempting to become human Lie detectors trying to decide if someone online is lying to us.

But current research suggests that when online, there are distinguishable linguistic signals which are dead giveaways to better determine if someone on the other side of the computer is outright telling a fib or not.

[ad#co-1]
This research particularly focused on those who are on the various online dating sites where you’d think that telling the odd little lie would be rampant. As you can imagine, this segment of the Internet is showered with deception from both men as well as women alike.

Why Would You Ever Lie On Your Online Dating Profile Anyways
So based on the personal descriptions written on a members Internet dating profile, researchers then attempted to identify all the obvious clues based on scientific forensic evidence along with the consistency of language to determine whether a person, the author of the profile was lying or not.

The research went as far as comparing the written profiles, the actual height and weight, and the ages of the participants which were taken into account on close to 10,000 online profiles. What was closely analyzed was the information and its flow of language that they provided.

They also viewed their online photos which were posted across the various online matchmaking websites and then decided whether they matched their personal profile descriptions or not.

A thorough linguistic analysis was applied on each of the individuals self descriptions which they personally wrote. What the majority of them revealed were certain potential patterns of inaccuracies in the members writing styles when matched with their photos.

So The Cross Analysis Revealed The Following
• For the online profiles which stood out to be the most obviously fragrant and deceptive about their dating profiles, the less likely they used the word “I” as a first-person pronoun. Those who lie do so since they’re wanting to distance themselves away from their statements which they know are not true.

• Those who lie online will use negation, which is a direct flip of the language. For instance they would restate being “happy” as being “not sad,” or they would use “exciting” instead of “not boring.”

• These dastardly liars also tended to write much shorter self descriptions about themselves, usually just a few paragraphs when describing themselves in their profiles. They do so obviously as a hedge against continuing their web of deception. The less that they reveal about themselves by choosing to write less, then there are fewer things which wasn’t true about themselves that they needed to remember or explain later.

• For those online daters who choose to lie about their age, weight, height, or included a photo which wasn’t exactly a true accurate resemblance of themselves, the researchers found that they were less that likely to write about their appearance in their descriptions. They chose to write more about their lives or their work achievements instead.

So How Much Do You Lie Online
Based on these indicators, the researchers were able to correctly identify close to 76% percent of those profiled were actually lying. This was significantly higher than what the average person is capable of guessing, which was well below 50% percent.

According to studies done in the past, the hit and miss ratio of someone not knowing any of these linguistic indicators were not very good.

What this research revealed was that breaking down and then accurately analyzing the verbiage which occurs online in a variety of different scenarios and finding consistency determines who is really lying or not.

When it comes to the online dating and mating sites, these are the sites, for obvious reasons, which reveals who is lying the most. Close to 81% percent of all participants, regardless if male or female, lied to varying degrees on an online dating site.

What People Lie About The Most Online
So what did they lie about the most. Other than their marital status, the most common of lies was how much they weighed. This was also the most common lie among women. This can actually be an honest mistake however since there’s this thing called a “diet” or conversely “overeating,” and they just forget to update their profile.

Based on the study, the women tended to misrepresent their actual weight by up to 11 pounds on average while 5 pounds for men. Close to 50% percent of the participants misrepresented their actual height, while close to 22% percent altered their their actual age. All this in an attempt to look better.