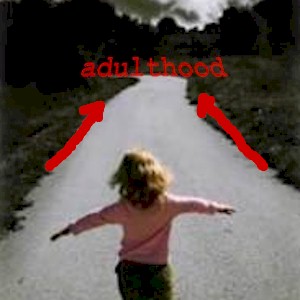 The most difficult jump, the biggest and perhaps the most painful is when we as adolescents, are required to take that blindsided leap into adulthood when in our teen years, for some unfortunately much too early.

Then once as adults, the majority of us are completely unaware that we’re still conducting our lives by the decisions that we would make from a child’s point of view, extracting the same framework of reference.

This rather than from a mature adults perspective. Although we as individuals, we men and women will begin to mature physically and at different points, become capable of controlling our lives and make our own decisions, but rarely do most ever achieve complete emotional maturity.

It’s in the view by some that the primary barriers to this maturity are blunted by some type of unresolved childhood trauma. These are the defenses which the child forms in order to fight off any emotional pain or dread.

The barriers that children face are the core anxieties which are related to maturing and growing up, realizing that time is passing, and giving value to their lives in spite of their inevitability.

How Emotionally Mature Adults Conduct Their Lives
• Emotional Control – Adults will experience all of their emotions, but once it comes to taking action, they’ll make rational decisions based on self interest as well as moral concerns or issues.

Full blown adults are capable of knowing the difference between the emotional process and the intellectual process. They have this ability so they can choose between having one’s functionality and decision making guided by their feelings, or by their thoughts.

They also display a strong sense of identity while striving to live with integrity, this according to their own values and principles that they believe in.

People, the emotionally mature ones who operate in the adult mode, will base their actions primarily and strictly on each other, their partner, as completely independent individuals, and will not tell them what to do.

They will give each other full consideration based on complete give and take when it comes to the reciprocal need of gratification. They’ll never fall into the master/slave scenario.

They have developed the capacity for both sides to give and accept love and while doing so, will not attempt to recreate the role of a parent in their partner, this by forming a fantasy based bond with them for safety or security.

• Completely Open Without Becoming Defensive – Those who are emotionally mature won’t display anger or show defensive reactions to any feedback or criticism. They won’t bother to disagree with any negative commentary.

But instead, they’re open to exploring new ideas which makes them better, they want and welcome this constructive criticism so they can expand their own self awareness from a different point of view.

These adults will seek out and discover self knowledge to know themselves better, while developing a better more accurate concept of themselves. They realize that they’re not perfect, and accept both the positive as well as the negative opinions of their personalities.

They also have a realistic perspective of themselves when it comes to their relationships with others. In the pursuit of this self discovery, they’re also aware of all unconscious motivation, while attempting to integrate it the best way they can.

• Making And Then Achieving Goals – What mature adults will do is formulate goals and then make a plan, take the appropriate actions so they can achieve them. This way, they can then establish all of their priorities in life.

By contrast, those who continue to live within a child’s state of mind, will often continuously overreact emotionally when it comes to events which are completely insignificant, when it comes to the overall scheme of their lives.

They’ll then fail to respond to the events which are significant or are crucial when it comes to their overall well-being, but instead get caught up in the small drama.

Since mature adults will pursue their goals or priorities honestly, their actions are then more than likely to correspond to their goals.

• Proactive Rather Than Reactive – Fully ripe adults are usually proactive and assertive, rather than being passive and dependent on others. They never feel victimized by life, complain, or shove off their problems onto others.

But instead, they’ll face their challenges or problems directly and then work out the best solutions rather than they depending on others for direction or help.

They will seek out help only in relation to whatever they actually need, in the areas where they may lack expertise, and not in relation to any unresolved emotional needs from their past.

• Having Personal Power – Some people just don’t have firm control over their thoughts or their feelings. The issues which will arise unbidden during the course of their everyday lives, and as a result will overreact.

Emotionally mature adults however will take complete power and command over every part of their conscious existence. They’ll constantly change any behavior or characteristic which they don’t like in themselves.

So what these adults do as a result is they’ll approach their entire lives from the standpoint of being completely responsible and become the sole directive of their destiny.

The Adult Child
These individuals who continue to experience their lives, view the world while still in the child mode, they feel and become powerless and always at the mercy or acceptance of others.

They will become completely overpowered by their own emotional reactions when under times of stress or critical decision making. When it comes to the real life actual world of a child, the child becomes completely dependent.

They then become victims of negative circumstances which are beyond their control. Children will then generally feel that they’re unable to protest or act in their own defense.

So accepting that everyone needs to live in the adult mode is obviously the preference, to be mature, so why is it that so many of these individuals who continue to function as an emotional child, and refuses to grow up.