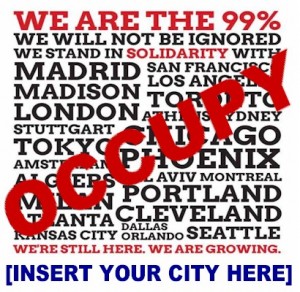 So the people, the youth, the one’s who feel injustice has spoken up and they have decided to make their stand with the Occupy movement. If you’ve ever wandered downtown lately to take a look, just out of sheer curiosity, at the local “Occupy [Insert Your City Here]” statement.

What you’ll find is a network of like minded individuals occupying city real estate, residing in their tents which are scattered among concentrated groups.

They are filled with those who are engaged in what seems like never ending conversations about democracy, politics and what’s in store for their futures. The ethos of common sharing as well as collaboration pervades the urban landscape and the participants seems to revel in union with each others like minded company.

[ad#co-1]
So this mirror scenario is similar in close to 2000 other cities of the Occupy movement around the globe. The residents of [Insert Your City Here] joined together sometime in October, beginning with Occupy Wall Street, to express their frustrations and anger over the obvious greed as well as the corruption of the mighty 1% percent of the wealthiest individuals of the world, along with the institutions which act and control their interests.

But as the weeks evolve, you’ll most likely see a different tone and evolution in the stand. You’ll notice what may transform into more of a commune type environment which operates on a collaborated setting, sharing views and distributing internal overall goodwill.

There’s also a mix of complexity and order built in as well. A network of committees which stands for what they feel are the key issues, with the major decisions made by the General Assembly. These committees are open to any individual who decides to show up and join. The movement seems to function based on the simple open economy of those participants who decides to freely contribute, based solely on what their views and desires are.

Occupy The World is an event which seems to be induced by what’s common in the software industry and what the infant “Open Source” internet was. Occupy are a series of events, mini conferences where the general topic in advance is agreed upon, and the participants organizes themselves into different sessions once the event occurs. These mini-conferences are completely inspired and mirror the non-hierarchy collaboration of the contribution mentality of the free Web in general.

Occupy The World feels similar to what the Web and it’s values and practices were during its earlier days, before it became commercial. The entire structure of the participation also mirrors the Wiki movement, the free online encyclopedia which is completely produced and supported by volunteers.

Since the Wikipedia entries are completely open to anyone on the Internet who wants to edit it, the majority will participate just by reading and then sharing entries. There’s a group of around 100,000 people who actively edit pages for “truth” content while an even smaller group will make the final edits as well as upholding the rules.

The Occupy Movement are large groups of participants who also shares their material, attend as well as engage in the key gatherings and the services. There are smaller groups which operates the General Assembly’s as well as helping govern the space and the daily efforts which are required to keep it operating. Similar to Wikipedia, Occupy [Insert Your City Here] survives because participation is easy, they just join in at the level that they’re comfortable with, as well as where it’s meaningful for them.

The Occupiers of the world are also making heavy usage of social media using outlets such as Twitter, Facebook and Google to collaborate and getting their messages out. This because the majority, as in practically all of the participants who are involved grew up and were educated by the Internet. So the structure of the Occupy camps feels to them extremely normal and what they’ll find in a typical educational institution or workplace which is governed by the online world.

Who knows how long it will last as the law will most likely find a loophole to put an end to the movement. These social enrages are extremely addictive, the lets all “Occupy Together” has the potential of creating a new segment of society where individuals are appreciated and recognized for their talents as well as their unique skills, where the roles are a lot more flexible.

Finding The Right Employee For The Job From The Employers Perspective