Reasons Why Magnesium Is Essential For Better Body Health 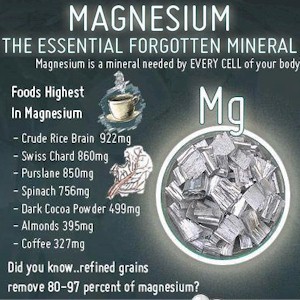 Most don’t realize the importance of magnesium for their health. Magnesium is a lesser known mineral which happens to serve an extremely vital role when it comes to the proper functioning and health of the human body.

Magnesium is found in both animals as well as plants. What it does is helps the plants with photosynthesis, while acting as a metabolic reaction in animals. There are over three hundred biochemical processes in the human body at any given time, which requires the presence of magnesium, to function properly.

So the question is how exactly does the body make use of it. The bones in the human body are the biggest benefactors of magnesium, as approximately half of what exists in the body are found in use in the bones.

Magnesium regulates the density of the bones, as it’s known that high levels of acid will weaken it’s structure. For this reason, it’s thought that adults and children can’t function at peak efficiency without the daily dosage of magnesium.

The lower that the levels of magnesium are in a person’s body, it becomes more than likely that they’ll develop certain diseases and illness.

What magnesium also does is it helps in controlling the neuromuscular activities of the heart, while helping in keeping the heart beating regularly. It’s presence also helps in keeping one’s blood pressure levels normal for extended periods of time.

The Amount Of Magnesium That The Body Needs
According to national research councils, what an average healthy individual needs is anywhere between 300 to 400 milligrams of magnesium on a daily basis.

It’s thought that adult males need around 350mg per day, while adult women need at least 280mg daily. These levels should increase to around 420mg for women who are pregnant, and after giving birth.

Children depending on their weight and body size will need around 130mg daily. There are statistics which prove that the majority of individuals don’t bother taking these recommended dosages.

The Most Common Signs Of Magnesium Deficiency In Humans
There are a wide range of known illnesses which a person can develop if they’re deficient, not taking the proper recommended amounts of magnesium daily.

• May Develop Musculo-Skeletal Issues – Those who are deficient may develop symptoms such as chronic fatigue, muscle spasms and weakness, tremors, restlessness, and osteoporosis as one ages
• Develop Cardiovascular Diseases – There are a variety of cardiovascular diseases which are linked directly to a lack of magnesium in the body. What these include are cardiac arrhythmias, atherosclerosis, and vasospasm.
• Premenstrual Syndrome – The deficiency of magnesium has been known to increase the symptoms of premenstrual syndrome in women.
• Certain Psychiatric Issues – Those individuals who may be suffering from mild depression, irritability, or bipolar disorder, has been found that they have lower levels of magnesium in their bodies.
• Certain Neurological Based Issues – Individuals who may be suffering from chronic migraine headaches, for instance, or are noise and pain sensitive, have been known to experience lower levels of Magnesium.
• Endocrine Issues – What magnesium does is it plays an extremely important role in acting as a messenger for insulin. Magnesium becomes important in both the secretion as well as its functioning. What doing so does is it plays a key role in controlling and modulating the blood sugar levels in the body.

The Lack Of Essential Vitamins In One’s Diet
The majority of individuals don’t bother getting the recommended dosage of essential vitamins and minerals in the foods that they eat, so as a result, they need to rely on soluble supplements.

What the body critically needs are all these nutrients daily for proper functionality, this especially in times of stress or intense activity, just so that the cells in the body can properly regenerate itself.

The effect of not getting the recommended dosage is that the body begins to experience a wide range of health symptoms, which can potentially turn serious if neglected over time.

So it’s important to see your doctor or health practitioner to find out whether you have a deficiency in magnesium. By doing so, the levels can then be corrected, and any potentially serious problems can be averted.

The Best Natural Sources Of Magnesium
Vegetables which are green and leafy in nature are excellent sources of magnesium and calcium. Spinach is singled out as an excellent source. The majority of beans, almonds, and other nuts are also rich sources when under a vegetarian diet.

Milk along with other dairy products are good sources of calcium, but however doesn’t usually provide the adequate levels of magnesium. One single handful of almonds, cashews, peanuts, or soybeans to snack on, can provide anywhere from 30 to 100mg of magnesium.

To sustain your daily intake of minerals, make sure that you avoid saturated fats, soft drinks and alcoholic beverages, empty sugar and tobacco, as what they do is counteract and diminish the absorption of magnesium.

Also, know that when taking any source of magnesium, that the most effective way is it being absorbed as direct to the bloodstream as possible.

How Our Poor Food Choices Accelerates The Aging Process