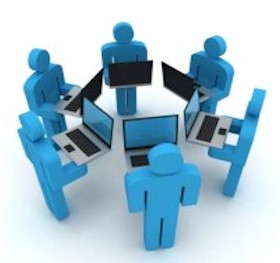 The online world that we live in has created an environment where Internet surfing and checking the various Social Media sites is now the modern techie geek version of getting up and going to the lunchroom water cooler, and talking it up with the boys and girls you work with.

Instead of companies handing down a strict social media “Do this but don’t do that” policy published through a corporate email, it’s a lot more effective to just discuss with the employees, preferably in person, a written guideline outlining the “good and the bad” impact which social media presents.

[ad#co-1]
Companies should be highlighting all of the potential pitfalls, such as easily revealing way too much information regarding proprietary company information, or disclosing confidential info about a client or a co-worker.

It’s extremely important to remind all your employees when they’re at work and posting their messages on Facebook, or sending out tweets that it’s not about them, or their own “personal” brand that they’re blasting away about.

Once any type of information, revealing or not is launched in cyberspace, it’s pretty much permanent and cannot be deleted. Personal rant emails in the past were directed towards that person only and it usually ended there. But with social media, your message can spread like wildfire to whomever on the online world is interested in reading and redistributing your message.

Social Media Can Be Damaging
Individual employees represents the entire organization, and their comments could have possible damaging effects since they can be permanent, magnifying negative effects towards them, and more importantly the company that they work for, or their employer directly.

For instance, say that an employee at a large company accidentally posts rather disparaging photos and a comment on Facebook regarding one of his clients and their latest fishing trip, unintentionally. His superior happens to see the comment and promptly asked it be removed ASAP, but unfortunately the damage is done, it’s too late.

Then someone reads the posting and shares it, along with a comment directed towards the client. The company as a result can lose a big chunk of business while taking a blow to their reputation as well. The person who happened to post the comment would most likely lose his job.

For most companies, scenarios like these gives due cause to lock the doors and forbid any employees from ever using these social media sites during the workday.

However, this type of iron clad response usually hurts the majority of those who know how to manage social media responsibly. It also prevents the organization from gaining all of the potential positive advantages that’s offered by this medium.

How Social Media Can Be Beneficial
There are actually benefits for businesses to allow their employees to use the various social media sites tactfully as well as in a professional manner. These companies should also consider allowing their employees spend some time on Twitter and Facebook for strategic postings.

Gone are the workdays when employees would generally punch in at 9 AM, and then just work at their designated stuffy cubicle for the entire 8 hour workday. The employees of today now often work in spurts while needing mental breaks throughout the working day to be the most effective.

The reality is that the majority are checking their emails, at times from their home computers or more likely their mobile devices. The line between work and home are now becoming completely blurred.

Setting Social Media Rules
All organizations however have completely different cultures as well as situations and protocols for effective social media usage. For example, those organizations who deal in sensitive or secure company information, such as financial institutions, will often have extremely strict rules for social media to protect their data.

By contrast, marketing or advertising industries allows for much lenient usage of social media. To make sure that their employees are effective, managers in these sectors need to assess and then understand how to effectively manage their social media as it pertains towards their specific workplace and industry.

Creating Social Media Sites
Instead of just using the common and mainstream social media sites, some companies are deciding to create their own proprietary social media site to share among their employees and clients. This displays their best practices across vast geographic areas and demographic profiles.

This option will give these organizations the opportunity to be able to balance their social freedom with suitable corporate responsibility along with stewardship by focusing the conversation directly on the business at hand.

For instance, if a large global company in the advertising trade creates their own Facebook type of social interaction site for the use by its district managers, they could then become part of groups which are based on their location or the type of department, and all the communication would be accessible to everyone who’s in the group.

Since the media site is focused directly on improving the quality of their stores, the managers of each division saves time and are more open to see information on the best practices in a more relaxed setting. These issues can include new revenue sources, client loyalty reward programs and better employee training.

This type of social media site is unique in that it celebrates all the corporate successes, but users are also encouraged to post any issues or complaints, whether significant or not.

The different group members are able to work together to better understand what may be the cause of certain problems. They can then offer constructive advice to improve the results.

Social media when used at the workplace has its own pros and cons, but with a bit of guidance and control, the managers can help in ensuring that the employees promote the benefits rather than exposing the risks.

Tips On Troubleshooting Your Internet Connection When It's Not Working

Taiko Drumming Bringing A New Beat As A Fitness Workout