Stop Trying To Be So Perfect Because That’s Impossibly Nuts 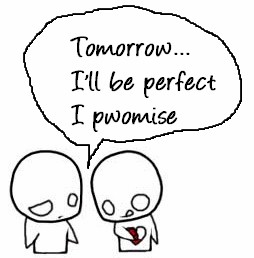 There’s a TV show, pick any TV show, where the kids are running through the kitchen with the dog on a rainy day while the chocolate chip cookies are almost done baking in the oven. Mom just shakes her head as she laughs at her glamorous picture perfect kids just being kids, full of promise, enthusiasm and innocence. She then pulls out the mop as she cleans up the muddy footsteps and suddenly the kitchen looks sparkling once again.

Despite these families managing their hectic schedules which includes juggling their jobs, PTA meetings and Sunday School, parents on these TV variety shows make it appear to be living the perfect lifestyle portraying the perfect family and make it look extremely easy and cozy.

So everyone then attempts to live up to all these perfect impeccable images which are embedded in their heads from their childhood TV watching. Perfectionism, to be as perfect and precise as possible is however driving them up the wall.

Because of this, we’re constantly being reminded that we’re not good enough, we just don’t cut it, we need to try harder. This more often and in more ways than we can care to count. The end result is that far too many people unfortunately reach for anti-depressants or other outlets to try and cope by using some other crutch.

[ad#co-1]
So Why Try To Be So Perfect?
The definition of perfectionism is “a disposition, which regards anything that’s short of being perfect as unacceptable.” There has even been research questionnaires which identifies the three different types of perfectionists:

There seems to be a bit of separation between someone aiming to leading a successful life and trying to be and achieving perfection. Contrary to any popular belief, perfectionism isn’t a requirement to be able to succeed.

In fact, perfectionism can be a trap which can have potentially serious negative consequences, particularly if you have a perfectionist personality. According to experts, perfectionists can often develop health problems because of the consistent stress that they place upon themselves. Perfectionists put unrealistically high demands and standards on themselves as well as judging themselves and others as always falling a little short.

The perfectionist believes that if your not perfect, then success as well as love will be elusive. The biggest cost and failure of this thinking is living in alignment with one’s true authentic self.

Instead of cultivating their existing positive qualities, perfectionists are busy trying to fix everything that’s seemingly not perfect. Extremely driven to live up to their perfect ideals, many will then become self promoting and pretentious, while becoming critical as well.

Focusing on attempting to achieve the goals which are set out, once achieved, it makes it extremely difficult for them to enjoy the actual journey of getting there. So as a result, the joyful experience of doing and being present in that moment is unfortunately lost.

Stalled At The Starting Gate
Often, people will focus less on attaining a certain goal and more rather on the journey, yet they still succeed. The perfectionists on the other hand, assumes that unless they’re able to give 100% percent all the time to a certain task, they won’t even begin.

As a result, they will become occupied with all of the trivial details as well as putting off tasks until they’re able to make an all-out effort. This will then eventually turn themselves into chronic procrastinators creating endless to-do lists and then putting their dreams on hold.

When it comes to relationships, the perfectionists does not do that well either. Perfectionists who are single just keep on serial dating without making a commitment or a choice, thinking that someone who’s more perfect is just around the corner. Those who are in committed relationships will tend to focus directly on their partner’s imperfections, and as a result, creates a frustrating atmosphere based on pointed criticism.

Being Perfect Is Not Perfect
This entire being a perfectionist persona can ultimately become a vicious cycle. The more that someone attempts to be as perfect as possible, there is more anxiety which develops. This anxiety, combined with with feelings of total inadequacy, makes the perfectionist concentrate more on what’s wrong and what they failed to accomplish.

So Being Not So Perfect Will Do
The greatest dilemma and torment of course is that no one or nothing is ever perfect. So as a result, most perfectionists will usually suffer from social as well as personal anxiety issues and strained relationships. So to be able to accept as well as nurture themselves, they need to overcome this perfectionism attitude and:

• Use the mistakes that they make as opportunities for potential growth
• Set goals which are more in line with their actual capabilities
• Accept themselves as imperfect human beings with flaws
• At times give less than 100% percent but still experience success
• Try enjoying the journey and the process rather than focusing on the goal
• Recognize that anxiety will arise because of all the unrealistic goals and mistakes
• Understand that more will usually get done if being completely perfect isn’t necessary
• Stop the irrational belief that all relationships must be completely perfect
• Stop constantly second-guessing themselves, use gut feeling instead
• Be as compassionate as possible with themselves as well as others

While attempting to do one’s best is extremely admirable, more often than not however, doing a good job is often enough. Life will usually reward the spirit as well as the passion which we can bring to the table, displaying ourselves as genuine human beings with flaws and not being the unflappable or impeccable images that those “perfect” television shows portray.

How To Be As Safe As Possible Using Google's Account Services

The Psychology Of Successfully Trading The Markets Is Not A Sport