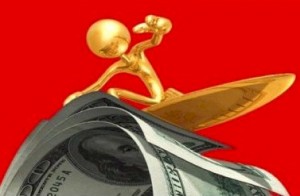 So any time within the hour of the trade, based on your method of entry into the market, you decide via technical analysis whether the particular Instrument that you’re trading is going up (Call) or going down (Put).

The market Instruments which are available for trade in Binary Options include: Major Stocks, such as GOOG, AAPL, Forex, such as EUR/USD, USD/JPY, Commodities such as Gold, Oil, Indices such as S&P 500, DJI.

If you choose true, you will then receive the predetermined payout plus the premium once it expires at the top of the hour (usually around 65% to 75%). Short and sweet. If you choose wrong and the market turns against you, then you will lose the premium that you placed on the trade.

To successfully trade Binary options, there are a variety of strategies which are available in all shapes, forms and sizes. When taking a closer look and dissecting the various methods, it usually boils down to two basic overriding strategies, “speculation” and “hedging.” So listed are the most successful common methods of speculation as well as Hedging strategies when it comes to Binary Options Trading.

Binary Options Trading Speculation Strategies
When looking at the various strategies and methods of Speculation which most Binary Option traders use, they all typically consist of the trader implementing their own system or method of technical trading analysis. The most common and important trait being that all of the traders attempt to pick highly probability entry points.

Candlestick charts are the most popular as well as the preferred choice that’s used on technically analyzing the market. Since the Binary Option trades are extremely short term, the strategies of market entry which are developed are thus identifying short-term market trends. This is something that all of the Binary Options traders consistently look for.

Opposite to getting into a Binary Trade early in the hour, one common speculative Binary Options trade strategy is that the trader will tend to monitor the market until the very last few minutes before the hourly lockout period to place the trade.

The obvious logic of waiting until the last few minutes is because doing so minimizes the length of time which the trade needs to be correct. The trader is speculating that the market will move in the same direction for at least the final ten to fifteen minutes or so before it expires at the top of the hour.

The reasoning for this short term based directional trade choice is that the market will at times be a little volatile and begin moving up and then down. It’s common for the initial trend at the beginning of the hour to reverse itself after a few minutes. So the reasoning is that the shorter the amount of time that the trade is exposed to, the better off it is.

Strategies For Hedging Binary Options Trades
There is another Binary Options trade strategy which may be viewed as being on the the opposite end of the speculation strategy. While the traders who “speculate” will absorb the entire all or nothing nature of the risk in the Options trade, the traders who hedge their trades prefer to place their binary trades early in the hour of the expiration cycle.

Once the early trade is made, the trader will then strictly monitor the performance of the trade, and will act accordingly and decide what action to take to ensure maximum gain while minimizing losses. Binary Options hedge traders will usually use one of the following three strategies before the trade expires.
NOTE: All three trade strategies assumes that the market is in a bull market, thus rising up.

1) Purchase a Binary Options Call (If the trader feels that the market will rise) early in the hour (The first 10 to 15 minutes) and, if the Instrument moves in the proper direction, the trader will then purchase another Binary Option in the opposite direction (in this case a Put) to lock into a “Profit Zone” minimizing the downside risk. This is when the market is volatile within the trading hour.

2) Purchase a Binary Options Call (If the trader feels that the market will rise) early in the hour (The first 10 to 15 minutes) and, if the Instrument moves in the right direction, the trader will then purchase another Binary Option in the same direction (In this case a Call) to potentially double the winning trade amount provided it closes out as true. This if the market is trending in one direction.

3) Purchase a Binary Options Call (If the trader feels that the market will rise), and if the Instrument happens to move against them, then they will immediately purchase the opposite Binary Option trade, (a Put in this case). The first position essentially locks in a loss unless the Binary Options hedger places another trade in the opposite direction to create a profit zone.

But if you’re more conservative and are interested in limiting potential losses and wanting to be more active in the trade, then hedging should definitely be considered.