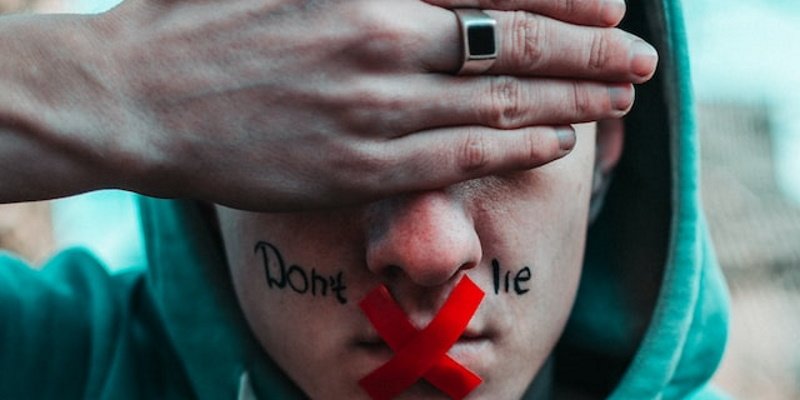 Some will lie to save face or spare pain when it comes to someone’s feelings. It could be to protect themselves from punishment, or to gain advantage. What’s known is humans have an innate ability to lie, some better than others. The ability to manipulate the expectations of people around them.

There are some who consider lying a refined social skill. We learn early as kids lying can work in our favor, and at times, we end up believing these lies we tell others.

We create our own web of deception, to portray the best possible image of ourselves. Since there are plenty of factors involved in misleading others, not everyone’s good at it.

In the attempts to becoming a good human, the intention is usually to deceive others as little as possible, which means lying only when we really need to.

Those who are pathological liars however, will tell so many little “fibs,” it becomes impossible to keep track of them all.

Those who have mastered the art of deceptive lying, usually only fabricates when they know they can get away with it.

Most liars will get easily caught, because they’ve constructed their deceptive story on the fly, without foresight.

The reveal is usually ones guilt ridden body language or tone of voice, that gives them away.

And because all of the details are fabricated immediately on the spot, what then happens is it becomes difficult remembering them all.

If premeditating a fake scenario and memorizing all the details, there’s a better chance of getting others to believe you.

When Lies Are True

This form of lying is known as telling a misleading truth, which most consider to be unethical.

For instance, let’s assume a friend invites you out for dinner, but you don’t feel like socializing with them.

The actual truth is bluntly telling them you don’t like them, or you’re not in the mood.

A misleading truth is to tell them you’re too busy at work or you’re already meeting someone else.

The key to masking this technique is avoiding follow-up questions.

To deceive someone, to influence them to accept your point of view, what’s required is learning to become an effective listener.

The ability to listen will give you the upper hand, the advantage of finding out what the nuances of the other person are.

Once you listen, learn, and determine what motivates that person by studying them, it becomes easier to deceive them.

What you basically become aware of are their interlocutor interests and activities, and their general perspective on things.

What doing so does is makes it easier for you to lie to them, then cover your tracks.

Diligently Work On The Details

One of the key reasons why most “lies” are exposed, is because the backbone of the story isn’t airtight.

What it comprises of are various dissimilar details the liar fibs about, to the same person.

Once they tell their lie, talk about the deceitful story to others over and over, it just becomes a matter of time before the lie is exposed and unravels.

What the best liars will do beforehand is first nail down all the details of the story, make it rock solid, then share it with others.

Committing To The Story

The majority of people are just poor liars because they feel uncomfortable, find deception is unpleasant, as they feel guilt and just want to get it over with quickly.

The police for instance know this, as what’s eventually revealed is the psychological toil the person displays.

There are the obvious internal struggles of telling a lie, which becomes visible from the guilty facial expressions and gestures.

A good liar never shows emotion, such as shame, guilt, or relief, as they stand by their original story.

This is the reason why changing an original statement, is instantly viewed with doubt.

Since most feel uncomfortable when lying, it’s quickly revealed in their poor body language. Once someone tells a fib, they’ll either:

• Touch or wiggle their nose
• Slightly twitch or begin to fidget
• Stutter or slur their words
• Their eyes begin to dart back and forth, or
• They begin to breath deeply while sweating

These gestures however, should be interpreted individually, as they’re often a complex set of indicators.

Someone who constantly touches their nose for instance, might suddenly produce a tissue because they have a cold.

If someone’s about to be exposed to their lie, what they’ll often do is use some type of distraction.

They will attempt to manipulate the person they’re attempting to lie to.

Once they come under suspicion, a seasoned liar will shift to another topic, suddenly become emotional, diverge the attention towards a completely unrelated activity or subject.

Bargaining Can Get You Off The Hook

Negotiating, reasoning, is an effective tactic of escaping repercussion once the liar is ultimately exposed.

This technique is utilized once the deceiver is attempting to dodge their responsibility for the lie.

They do so in the hopes the interlocutor won’t get angry or react harshly.

Although the majority will feel uneasy when lying to others, the victim can also feel embarrassed to accuse the deceiver.

Once they do start pointing fingers however, there’s usually one solution to restore credibility.

This is how experienced seasoned politicians respond to questions that are uncomfortable.

They’ll stand by their statement with a certain level of proactive “how dare you” aggressiveness.

If the individual doesn’t back off and remains persistent on the topic, what they’ll then do is force the critics or detractors to direct their resources elsewhere.

How To Persuade Consumers To Think Your Way And Buy