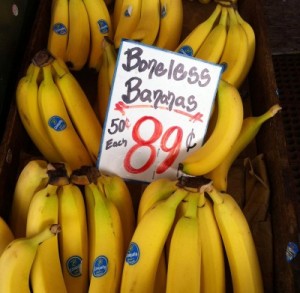 Is there any value in brand names, well yes, they have plenty, they pack a lot of punch. It’s been tested over and over again that the majority of consumers without wearing a blindfold will rate the identical beverage for instance as tastier based on the brand on the container which they prefer better.

There are also other hidden and manipulative techniques that your local grocer uses to part you, the grocery shoppers money to pay more and buy more often. They have it down to an art to siphon more cash from you. So listed as a few of the most popular techniques that they use.

[ad#co-1]
Why Are Those Bananas So Yellow
Take a look at those bananas, they are absolutely delicious looking when they’re so perfectly ripe and yellow like that. Well yes they are and no its not by accident.

The major banana growers and distributors have it down to a science to give that perception by manipulating and then portraying the banana to make it look as fresh and inviting as possible.

They’ve even developed a banana marketing guide and schedule for grocers, which illustrates the various colors of green to a rich yellow hue of the banana. They also explain how each of the color stages is a potential sales opportunity.

For instance, the best selling bananas are the ones which are known as Vibrant Yellow, the stage where they are just reaching their peak ripeness. The next best selling banana is a darker shade of yellow which appears a little riper.

These banana marketers have studied the sales cycle of the fruit. They harvest the bananas at the precise exact color of green, and then calculate the distribution time schedule through the various channels so that the bananas will reach the exact “color” once they hit the grocers stand.

Wow Look At Those Beautiful Fresh Flowers
Did you ever notice that once you enter your favorite supermarket, that directly to the right of the entrance are those beautifully aromatic flowers of various colors.

What this does is it sets the mood that you’re in your own garden while also giving the illusion that these fresh smelling flowers were cut just a few minutes ago by the florist.

This sets the right tone for you the consumer while influencing your entire shopping experience for that day. You would not begin on such a wonderful note if there were bags of cat food or toilet paper at the entrance of the store. Then beyond the flowers, there are those damn glow in the dark yellow bananas… Hmmmm.

Look At All Those Empty Wooden Crates… Wow The Produce Must Be Fresh
Next time, take a look all of those cardboard or wooden crate boxes which are always stacked waist high and filled with fresh oranges or apples. Well, if you talk a closer look, those are just empty boxes which are actually a part of a larger display with partitions.

This as you can guess is purely deliberate, and done strictly to create the illusion of farm workers piling up all those crates of fresh fruit which are freshly picked and stacked one on top of each another. But there’s proof that apples bought from the store can be anywhere up to 6 months old. Yum.

Where Is The Milk
This has actually been known as a tactic for ages. You need to walk all the way to the back of the store for common staples such as eggs and milk. These are the products which most people who are in a hurry need to purchase. But they are located way, way back there.

This as you know is no accident. You’re then forced to walk down the aisles just to get these basic foods, and then it becomes more than likely that you’ll pick up that bag of chips when you walk by them, or worse, an expensive impulse buy which are always placed at eye level.

Oh No I’m Going To Get Sick… The Cheese Expired Yesterday
So when it comes to the eggs, milk or cheese, along with many other foods including water, they are now stamped with expiration dates. There are now a large and growing grocery list of goods which are date stamped, including toothpaste, canned goods and cola.

So you’re most likely thinking that the Health Department of the Local Official Government body is looking out for your best interests by forcing these manufacturers to place these expiration dates, ensuring that you get the optimal fresh goods and thus you won’t get sick.

Well, this isn’t quite true. Some of these products don’t even actually expire, or they will expire much, much later than the stamped date. If the milk that’s in your fridge isn’t becoming solid like sour cream, or is lumpy and rancid, has no odor but actually still smells fresh, it’s most likely still fine to drink a couple days after the expiration date.

These expiration dates are usually added as a scare tactic to force you throw out those expiring products and then you’d have to replace them on your next shopping trip. This also works as an effective inventory method for grocery stores to re-order.

Because Everyone Else Is Going Green You Should Go Organic
How green are you. Do you go to the store to specifically seek out and select products which are organic, and are willing to pay extra for them. There are now “Green” companies, such as soap manufactures, who are making a killing appealing to your environmental consciousness.

So all of the traditional regular brands are fighting back and they are going green now as well. Even the bananas are green. They are now rolling out organic green versions of your traditional favorite brands.

You’ll notice the manufacturers new “Go Green” stance on TV ads, such as, “We are now green, we’re using 22% percent less harmful non-degradable plastics in our bottles.” What this does is it removes your guilt that you’re not helping the environment and those bad compounds don’t end up in a landfill.

The actual term “organic” is also sparingly used in organically fed chicken for instance. The alternative of course is buying chickens who have spent their entire lives in an overcrowded dirty chicken coop instead of being able to run around free on a farm. You would gladly pay more for that right?

But not all of the organic products are always misrepresented. If you are really that concerned about how the animals that you roast in your oven are treated, then the “free range grass fed” poultry must make you feel a lot better.

Meanwhile Back At The Underground Science Lab
This based on the science which is known as neuro-marketing. These are the brain scanning technologies which are being tested using MRI, to look into what areas on the brain heat up at the various stages of the buying process.

On one test, the researchers could correctly predict the individuals buying choices based on the the slightest rise in blood pressure and the eyes blinking more rapidly, this seconds before the consumer even knew what they were going to purchase.

Never get seduced or distracted by the flowing green and yellow fields which are on the food labels. If you’re really looking for ‘farm fresh,” then it’s recommended that you go to your local Farmer’s Market instead.