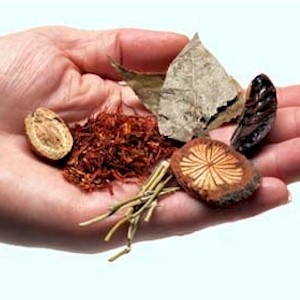 Almost everyone in the Western world will suggest that you go see your doctor for the proper diagnosis and then the medication for high blood pressure.

But there are alternate forms such as herbal remedies and acupuncture that’s proving to be just as effective methods for managing this particular condition.

There are certain herbs which has been used for thousands of years which have shown to have an anti-hypertensive effect. There are other select herbs that’s been proven effective for other medical conditions, such as improving cardio function, or lowering high cholesterol levels.

What acupuncture does is it has a general relaxing effect which is useful when it comes to reducing stress and hypertension. There are certain pressure points where the laser thin needles are inserted for the treatment of symptoms which can reduce high blood pressure.

Chinese Herbal Medicine For Reducing High Blood Pressure
One of the most common herbs which are used for the symptoms related to hypertension is gastrodia rhizome. Intensive research conducted in China has shown positive results under various clinical conditions.

It’s known to have a sedative and tranquillizing effect while also showing signs of reducing renal hypertension and essential hypertension.

Another popular herb is the chrysanthemum flower, which has a prolonged effect when it comes to lowering blood pressure, this through peripheral vessel dilation. This particular herb is also known to increase one’s blood flow to the heart.

One other herb that’s used to treat certain eye problems which may be related to or contributes towards high blood pressure is prunella. Research has shown that it has vasodilating effects as well.

These herbs are the most popular when used individually or in a combination with others by practitioners in the treatment of patterns which are often related to these symptoms.

Herbs To Reduce Other Common Medical Issues
One particular herb which is used to improve or better moderate the proper function of the heart, including circulatory function, hypertension, and lowering bad cholesterol, is the hawthorn berry.

These particular berries has effectively shown to reduce cholesterol levels when taken for a period of six weeks or longer. They’re also used to improve circulation as well as treating angina pectoris.

Another herb that’s commonly used for cardiovascular issues is Salvia, which is known to reduce high cholesterol while improving circulation in the body and cells. This herb when taken in pill form, is also recommended for treating coronary heart disease and angina.

Salvia has also shown to have positive effects on the repair and the regeneration of tissues, by being able to increase one’s metabolism in the body.

The Practice Of Acupuncture
There are certain acupuncture points which are specific for the treatment of patterns which are related to high blood pressure. One point which is known as Large Intestine 4, is an area that’s known to control and reduce headaches.

This area is located on the back of the hand specifically between the thumb and the index finger. It’s also a common point for high blood pressure related patterns as well. Another point which is located at the vertex of the head is known as Du 20, which is another pressure point for hypertension.

An experienced acupuncturist along with a herbalist will take inventory of a particular symptom, which includes inspecting a person’s tongue, along with taking one’s pulse in order to determine the specific combination of points and herbs that the patient may need for cure.

Modern Medicine And Ancient Herbs
There are now some cardiology departments in China who will use modern diagnostic equipment and modern medicine, and then combine them with the wisdom of their forefathers by using herbal medicine and acupuncture.

These various medical practices are now used together to treat certain conditions such as: enlargement of the heart, high blood pressure, cardiac arrhythmia’s, angina pectoris, and stroke. In some cases, herbs such as Dan Shen are injected directly or given intravenously.

Once a particular condition is diagnosed by using both traditional Chinese diagnostics and modern science, medication is then used if the symptom needs to be controlled, or for emergency treatment situations.

As the patients condition begins to improve by using traditional Chinese herbs along with acupuncture, the doctors will then slowly adjust the dose of the medication which they’ve initially received.

Some claim that the results can at times be better than just using medicine alone could have ever achieved.

The Adoption Of Herbal Medicine
In the Western world medical setting, there’s still not enough conclusive testing and evidence when it comes to modern medicine and combining it with these ancient techniques.

Nonetheless, as there’s more research being conducted on the benefits of using Chinese medicine, it may one day lead towards more of an integrated system of care.

One thing that’s known for certain is that using herbal remedies are far more cost effective than using doctor prescribed medication, while also having less side effects as well.