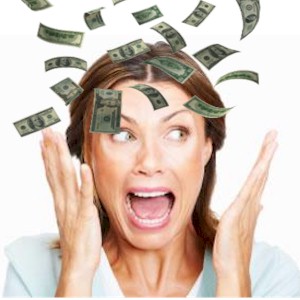 You’re here right now, reading this, showing signs that you want to personally improve your financial situation. You may have little or no money, even be broke, and are faced with struggling from the situation.

There’s pain along with the suffering and the embarrassment when being in this particular state, but know that nothing ever remains the same.

Not having money can be the biggest horror which will cause feelings of failure, thoughts of despair, lack, and need.

Being broke is also the biggest roadblock which prevents you from becoming wealthy.

It then becomes a Catch 22 type of vicious cycle, but one that you can easily break, while transforming yourself by understanding the fundamental universal laws which exists. This being how our minds along with our spirit interacts with the universe.

You Are What You Think
You most likely heard this a thousand times before, “You Are What You Think,” but it is the basic underlying state of your being. In this particular case, it’s being broke, having no money, as this is the most dominant feeling that you’re experiencing in your mind right now.

So as a result, your constant thoughts of you having no money, this message is what’s being broadcast and received. It’s being transmitted out to the the universe, which then complies to your thoughts, and in return will give you more of the same, which is being broke. You are what you think.

But what modern day thinking has done is it’s put a twist on this. Having no money is an extremely powerful message that you’re sending out to the universe, as well as ourselves and everyone else.

What we’re in, is a state of complete being, and that is being flat ass broke. This will dominate, influence, and inform our actions to act in a certain way, which is continue to have no money. We will also continue this trend, this condition of being broke for as long as we think of it.

It Begins With Your Inner Reality
All of our external life experiences that we have is a reflection of our inner reality, whatever we think of the most will come true to form.

All of the feelings and thoughts that we think of and wish for, consciously or unconsciously, is what creates the exact road map of our lives. Whatever your most dominant thinking is, which is created by your current state of life, is also creating your immediate future, which is tomorrow.

It may initially be difficult to grasp this, but we’re completely responsible for whatever we experience. So if you happen to wake up unhappy, for instance, then you’re most likely experiencing events which you’ve perceived as causing you to feel this unhappiness.

Then you would say to yourself, “I’m unhappy because of this *state reason why*, it’s no wonder why I’m feeling so unhappy.” You as a result will become trapped in your own never ending cycle not realizing that you’re solely responsible for your own experiences, in this case being unhappy.

Breaking The Cycle
To break this cycle, you first need to realize what’s broken, or not working properly in order for you to fix it. It’s your own message that you’re sending out to yourself, but there’s an easy fix for this.

If you realize that one day your unhappy, or broke, and then understand that being unhappy or having no money is the cause of you continuing to experience these feelings, that’s what you need to change, and it can be done instantly.

All that you need to do is break, stop, and then change this cycle. Decide and then choose to be happy, or not to be broke any longer. Thinking this doesn’t take anything away from you.

All that you need to do is be completely aware of what you’re thinking, so pause, and bring up the state of being happy or having money in your life, and then replace the previous feelings with it. What’s certain is that we all have the capacity to do so.

Choosing What You Want
Choosing is free will, so if you choose to be happy, wealthy, healthy, or whatever else that you want, you can do and be so. So take a moment and just be rich, or happy.

This is completely possible for anyone to do under any situation or circumstance, and it’s an extremely powerful exercise once you do so, and understand it’s power. If you’re happy, then you’ll begin to do things which make you happy, and you’ll attract more happiness into your life.

Being happy or feeling that you have money is the first step towards living a happier and a more abundant life. It almost seems like a riddle because of it’s simplicity, but realize that it’s just unraveling the core foundations of life.

Having More Money
So if you currently find yourself being broke, then look within yourself first. What you’ll find is that you feel broke, which is your current state of being.

Just the awareness of this will give you the choice to change, this because you can choose and change your state of being. Just imagine what it feels like to be wealthy.

Trap that feeling and then hold on to it, and then now you’ve become wealthy in your own mind. This is the only way that you can break this perpetual cycle of always being broke, by thinking, genuinely believing that you’re wealthy, and it’s free and okay to do.

What you’re doing is transforming, changing the signals which you’re broadcasting to the universe. You are now emanating wealth in your thoughts and the natural laws of cause and effect has no other choice than to bring you what you’re thinking of.

Your actions from this point forward will then begin to bring to you all of the wealth which you feel inside, so dream big.

By becoming completely conscious and aware of your various states of being, you can then choose to change them to whatever you want. Then the positive results will come back to you without fail. This because of the natural universal laws of the universe.