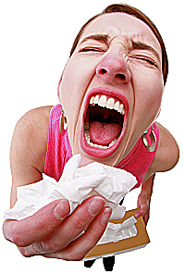 It’s tempting to just dismiss someone you know to pass it off as genetics or just plain luck. They’re the one’s that just seem to catch a slight sniffle or suffer from the occasional body pains and aches, but they never catch anything major like the flu, major illnesses or high fever, which sends the majority of us under the warm comfy covers and phoning in sick for the day.

Despite decades of scientific advancements and research, doctors still do not know exactly why, so they tell us, definitively how we can even avoid the common cold. So we may as well begin looking for solutions from those people who always seems to be healthy.

So compiled are a few common and perhaps surprising habits which all of those people who never seem to get sick have in common, and how you can easily adapt them for a healthier life.

Common Traits For People Who Don’t Get Sick

Less Stress Is Better
Stress is one of the worst enemies which will damage the immune system as well as attack the heart. Studies suggest that as levels of stress increases, the chances of contracting certain bacterial infections rises as well. There’s also evidence which supports that you learning how to relax properly is critical.

It’s also known that stress is one of the top health concerns for children and young adults between the Grades of nine to twelve. It was suggested that uncontrolled stress can potentially have long term health effects if they don’t learn how to manage it properly.

Since consistent exercising is one of the best ways to relax, it was found that just taking a vigorous spirited walk around the block actually reduces stress by up to 20 percent.

A diet which is rich in fruits and vegetables is also important, as well as having a good laugh. Naturally laughing out loud at something funny releases endorphins in the body which acts as a natural stress reducer. Plus, a good “yuk-yuk” will usually give your heart muscle a much needed workout as well.

Brewers Yeast… Really!
It was found that those who are healthy will occasionally sprinkle brewers yeast directly on their food. It seems that just one tablespoon or so will do, as it packs the majority of all the required B vitamins which you need on a daily basis.

Brewers yeast also includes all of the essentials, such as riboflavin, thiamine, niacin, folic acid, biotin and B6. Without these vitamins, the body can’t properly metabolize carbohydrates, proteins and fats.

The B vitamins are also essential in maintaining healthier skin and hair while soothing the nerves and fortifying the blood cells. The B’s will also strengthen the immune system as well as the hormone-producing glands.

Taking the B vitamins also helps manufacture antibodies as well as provide white blood cells. During stressful periods, these B vitamins can quickly be depleted, which then compromises the immune system.

So you can just sprinkle a tablespoon of brewer’s yeast over your breakfast cereal or your popcorn, or add it directly to your soups and sauces, as the taste will blend right in, especially with any dish that is tomato based.

Just Eat Less
As far as 80 years ago, there were studies which proved that animals who were fed less than their counterparts lived up to two times longer. More recent studies based on humans has linked that less calorie intake actually lowers the incidences of health problems which are related to aging.

These illnesses include diabetes, cardiovascular disease, and Alzheimer’s. Those tested who ate up to 25% percent less than usual, had recorded lower overall LDL cholesterol levels, as well as lower blood pressure and triglyceride levels.

Keep in mind however that reducing calories as a simple diet solution can often be unsafe if done incorrectly. It’s recommended that you begin by just reducing all of the simple sugars and white flours, and begin packing your meals with more fruits and dark leafy green vegetables.

Embracing Bacteria, What?
No, it’s not about throwing some dirt from your garden into your blender the next time you make some pesto sauce. What research suggests is that moving towards being completely sterile in this modern age that we live in, isn’t necessarily any more healthier than it was before.

It seems that path to becoming increasingly healthier is most likely somewhere in between how our ancestors’ lived and the over developed hyper-clean world that we currently live in.

Active bacteria and our bodies has always had a symbiotic relationship in which the presence of bacteria actually helps our systems to stay healthy as well as balanced.

These “good” germs can actually enhance our immune system, improve our metabolism, and reduce inflammation. Studies has found that the more bacteria which you actually have on the surface of your skin, the better that you’re able to combat inflammation.

So you’re free to go outside, sweat it up a bit and have friendly contact with what Mother Nature offers you, go get dirty! Also, rather than giving your organic foods an absolute scrub down, just try giving them a rinse.

Herbal Remedies Are The Key
Although health aids which are plant-based may have been slightly ridiculed in the past by the Western based medical community, there’s actually close to 25% percent of all the prescribed drugs which are actually derived from plants.

Herbal remedies, which are plants that are purported to have certain medicinal properties, plays an integral part in traditional Chinese medicine. So the word is spreading that certain plants has abilities to heal.

Certain plants has proven to alleviate high blood pressure, destroy germs, stimulates the nervous system, and boost the immune system. But you don’t need to fill up your medicine cabinet with all sorts of supplements, as something as common as sipping green tea can help in improving your immune system and overall health.

Although certain “commercial” green tea beverages has recently come under fire lately for unsubstantiated health claims, actual studies have shown that the antioxidants resident in natural green tea, known as polyphenols has the potential to be able to boost metabolism as well as burn fat, control blood sugar levels, protect against liver disease and lower LDL cholesterol.

It’s recommended however that you skip those pre-packaged bottled tea versions and start drinking the natural unflavored loose green tea on a regular basis instead.

The Psychology Of Successfully Trading The Markets Is Not A Sport

How To Decide Which Digital Camera Or Camcorder Fits Your Needs