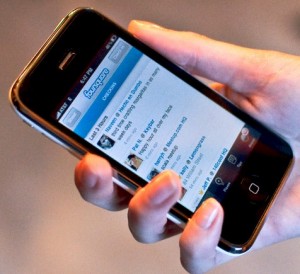 Who said that you can be the mayor, well Foursquare did, as you using their app will allow you too do so. The Check-In app that’s offered by Foursquare has vaulted away from it’s competition, so are you participating to keep them on top?

Foursquare and their mobile app has been one of the most successful that’s available, when it comes to real-life users contributing and sharing their experiences and then reflecting it on the digital world. There are presently over 6.9 million user who are actively “Checking In” across the various mobile devices.

When using the Foursquare application, users will check-in while they’re at their favorite restaurant, businesses or local retail services and share their exact location with their friends. Doing so allows them to collect points as well as get discounts or coupons from these local establishments. They will also earn “badges” and yes, you really can even become the mayor.

Location Based “Check-In” Apps
There are however other similar mobile based location “check-in” type of services other than Foursquare which are on the market. But Foursquare has managed to keep their market share from these competitors such as Google Latitude and Facebook Places. Foursquare has reported to be growing by close to 30,000 new members a day, as well as getting over 2 million check-ins every day.

Foursquare has also out grown competitor Gowalla, who has just over 1 million members, as well as Loopt, which has over 4 million current users. The key to Foursquare’s success seems to be their solid relationships with the major retailers that they are associated with, along with all the various smaller local businesses that contributes to their popularity.

Foursquare was one of the originators of the location based social networking concept to actually use as well as convince local retailers to participate in this strategy as a viable business option. They were the first to get these smaller individual businesses and services to contribute as well as stimulate their mobile devices audience, allowing them to grow.

It now goes far beyond just checking in. Foursquare has also been able to generate as well as drive momentum by they cross marketing its app along with their services to both the consumers, who like the app based purely on the social sharing element of the check-in service, as well as the opportunity to get discounts by the retailers, along with the retailers themselves who see Foursquare as a vehicle to reach the mobile savvy consumers.

Foursquare And Their Partners The Key
Not too long ago, for example, there was a restaurant who decided to offer free appetizers to their customers who happened to be using Foursquare’s app to check-in while at one of their restaurants. Foursquare has also aligned with significant corporate clients which includes companies as well as organizations such as, major sports leagues, well known designer clothing labels and music portals. Foursquare also works with a lot of the smaller local businesses, who view the app as an excellent means of reaching mobile consumers who are on the go.

Foursquare Goes Beyond “Check-Ins”
Foursquare is not just a pure “check-in” service, as you can also add comments along with your photos. Social media as you know, can be an extremely fickle and a constantly moving target as a business model, so the retail element which Foursquare has developed may become increasingly vital, as the appeal of the app’s “badges” program or the “mayor” awards may begin to fade.

These features may initially seem like gimmicks and thus eventually get tiresome, especially with their faithful users, but the bargains as well as the discounts should keep Foursquare relevant and popular. The retailers as well as the various merchants also contributes to Foursquare earning revenue from their advertising along with the income sharing models.

The eventual expected competition from Facebook Places as well as the newer Google Latitude could eventually push Foursquare to further expand their relationships with retailers as well as adding new features for their users.

[ad#co-1]
By continuously expanding their app’s features, Foursquare should be able to keep their current users and not be pushed out of the way like MySpace, when Facebook became prominent. Originally, the Foursquare app was only available for just a few metropolitan cities around the world, but they have changed their business model so that users are now able to check in from practically any location around the globe.

Foursquare has also made available its API for third-party developers, as well as their application being available for a variety of mobile platforms such as: the iPhone and iPad, Android devices, BlackBerry OS, and Windows Phone among others.

If Foursquare is able to maintain the level of enthusiasm and user acceptance, as well as staying in tune with the needs of both the consumers and the various businesses, it may just be an app that will stay awhile. But never discount the “big boys” on the block when they flex their muscles.