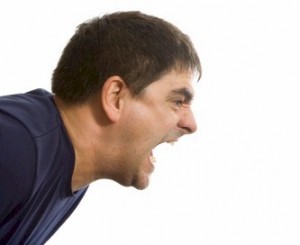 Do you know someone, yes that guy, that particular person that no one really likes or wants to talk to, but tolerates nonetheless. This because of his arrogant “little” man smug persona. He lets his Anger get the best of him and won’t reverse or fix his mistakes and as a result becomes extremely bitter.

Some would often describe their anger moments much like a wave that would pound over them. This similar to the real forces of nature sending ocean waves crashing onto the shore. Anger at times is able to surprise us like a sudden and violent destructive force. Getting upset can also seem unavoidable or inexplicable to some as well.

But anger should never be considered unstoppable, although it can feel that way, whose anger at times can threaten to take over and control their actions and thus their lives.

Although these sudden flare ups of anger and rage may seem to come out of nowhere, researchers generally agree that the emotions which will cause us to get mad and suddenly overreact towards the ones we care about and regret later, are anything but fleeting. This is similar to the ocean waves which are caused by a storm that’s far away in the distance. Anger festers from a deeper emotional disturbance level as well.

[ad#co-1]
The Ill Effects Of… You Mad?
Anger can be a healthy emotion when it’s expressed and controlled appropriately. But when it’s not, then it can have devastating and damaging effects. Anger at its root results in most personal as well as social problems such as physical or verbal abuse, domestic violence, and community violence.

The ultimate effects of anger are not limited just to our personal or our social lives however. Unchecked and uncontrollable anger taxes a person’s immune system while contributing to migraine headaches, gastrointestinal based symptoms, coronary artery disease and hypertension.

The Different Faces of Anger
While it can be easy to get angry on occasion, such as during road rage incidents, children who are unruly, or unresponsive co-workers, we do not usually recognize the more subtle hidden expressions of anger. For instance, our anger can build up as well as manifest itself by acting impatiently, obsessing over imperfect loose ends, or by making critical judgments.

Festering anger in silence or by withdrawing can be just as harmful as being overtly violent. Everyone is uncomfortable with someone who displays passive-aggressive behavior, as it’s usually characterized by silent emotional abusive treatment towards others through evasiveness, which leaves them helplessly disempowered.

A passive-aggressive person’s motivation is that they’re convinced the only way to protect their “little-person” fragile ego is trying to be in complete control as much as possible. Rather than viewing their relationships as a dynamic and open exchange of encouragement as well as understanding, they’re always thinking in competitive terms. Others aren’t considered as potential partners but more as potential adversaries.

Avoiding The Anger Pain
Anger is an emotion which gives some people the excuse of distancing themselves from others who may be hurting them. Issues such as safety or giving up control are usually the culprit.

If somebody happens to feel threatened by someone else and they’re powerless or unable to resolve it, then reacting with anger is one of the ways to keep the situation at a safe distance. For most, anger is the only strategy that’s in their arsenal for being able to deal with negative or emotional situations.

Taking Control Of Anger
Since anger is often the result when in some certain situations we feel powerless, it’s natural to initially react by immediately just blaming others. However, blaming others can at times worsen the situation by allowing us to avoid taking any responsibility for our own emotional reaction.

Learning how to recognize your own internal warning signals of “anger” is critical. You need to take some time away from the situation, take a break, so that way, you won’t respond in the same reactive angry manner.

Once you learn how to temporarily defuse your personal volatile situations by calming yourself down, or by removing yourself physically from the situation that’s making you angry, the next step is to address the bigger issue which is why certain situations raises your anger.

You need to realize what the cause of your anger is on a deeper emotional level. You need to mentally “count to ten” when you’re in tense volatile situations, or use deep breathing techniques to control your next reaction.

But if you don’t address these deeper issues which are creating the problem, such as the lack of communication with your mom, spouse, co-workers or kids, then ultimately in the end, you’re just running away from a problem that isn’t going away on its own anytime soon.

If your anger is causing the same recurring problems in your life, it can then become difficult to be able to look within yourself and face all of the fears or the pain which you may have been running away from for years.

But it’s possible, you can still do it, just do the right thing. You have the strength within yourself so you can take control of your anger as well as your life.