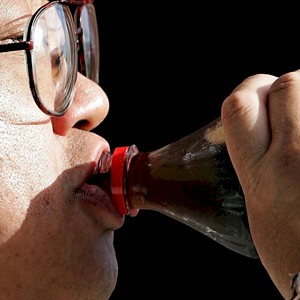 So there you are feeling grumpy once again, moody, in an unpleasant disposition. You’re also recently finding yourself becoming prone to these emotional mood swings more often, while everyone else takes notice.

You’re no longer a pleasant sight to see, your coworkers, friends, family members, all begin avoiding you like a bad habit, this anytime that you get near them, all because of your irritability. It shouldn’t surprise you that it’s usually what you eat, what you place in your stomach which results in this poor state of mind.

It’s usually associated with your diet, the composition of what you’ve eaten in the past few days that’s most often responsible for the display of your emotional ups and downs, your temper tantrums, getting mad for no apparent reason, and then suddenly laughing or crying about it for no apparent reason.

Foods Which Can Make You Irritable

Caffeinated Beverages
The primary culprit can be the amount of daily coffee that you drink, which can perk you up, but too much of it can put you into a horrible mood. Whenever you’re wanting to boost your sluggishness, the usual habit is reaching for a cup of coffee, then another.

What you initially feel is a sudden rush because of the injection of adrenaline, this courtesy of your your pituitary gland. But once you begin drinking coffee to excess, thinking you’ll be perkier, what you experience instead are the consequences of an accelerated heart rate, the jitters, anxiety, perspiration, and mood swings.

Solid Processed Fats Such As Margarine
There’s the age old question, “What’s healthier, butter or margarine?” The answer is butter every time. The reason being that margarine contains processed fats, and what these fats do is they cause insulin imbalances, weight gain, an increase of heart disease, and mood swings. The best alternate is olive oil.

Avoid Those Bagels
What’s convenient is picking up a toasted bagel at your local cafe with a coffee on the way to work. But bagels in particular are singled out, even the whole wheat variety, which appears healthy but are usually not.

The reason being that this type of bakery product, which also includes donuts, are loaded with quick burning carbohydrates, the kind which causes a sudden blood sugar spike followed shortly by a sugar crash.

The end result, because of the drastic actions that your body takes, is it affects your energy levels, which can cause dramatic mood swings.

Processed Deli Meats
Taking a lunch to work is convenient and practical, a practice which began in school. Packed lunches can be a healthy and an excellent economic habit, but it’s your responsibility what you put into your sandwich.

The most convenient are the packaged deli meats such as ham, pastrami, corned beef, or hotdogs. But know that you’re doing yourself a big disservice by doing so.

Most Fried Foods
One of the worst being french fries, so its recommended you avoid them if possible. The only exception is if the potatoes are baked with olive oil in the oven, but there’s little chance that the fries from the local diner are prepared that way.

These tasty golden fried pieces of goodness which we usually become addicted to as children, is a bad food choice because of the unhealthy saturated fats, high salt content, and refined carbohydrates.

Not only do these and other processed deep fried foods take an extremely long time to digest in your stomach, they also weigh down your body which causes bloating and moodiness.

But these products, especially the store bought variety, are loaded with refined sugars and vegetable shortening, which leaves you in a state of fog while feeling lethargic, which also leads toward weight gain. To get a natural sugar rush, look for fresh fruit such as bananas instead.

Convenient Prepackaged Snacks
When you’re watching TV, the favorite food choice are usually potato chips. Even though they’re a vegetable, they’re turned into pure evil food once they’re fried in saturated oils, and then covered in salt and seasoning.

The unhealthy oils that are used to process the potato chips are known to lower brain activity while elevating bad mood. The worst ingredient that’s in these types of fried foods is a toxic carcinogen known as acrylamide, which is produced during the frying process.

Other Unhealthy Snack Foods
What also becomes difficult is resisting a handful of salty roasted peanuts, as they’re tasty, convenient, and addictive. Other than the protein that they contain, it becomes difficult to find any good in them.

It’s known that the excess salt, preservatives, and the food additives that they contain can lead towards migraine headaches, moodiness, excessive bloating, and difficulty breathing.

Sugar Free Drink Mixes
Most think that the sugar-free variety of drink mixes are healthier, which also keeps them slim since less sugar is consumed. But what these powders and liquids contain are extremely harmful additives including aspartame, which some claim is worse than sugar itself.

It’s thought that drinking these sugar-free beverages can actually lead towards excessive weight gain, along with chemically induced mood swings.

Avoiding Soda Pop
What the average person in North America consumes is approximately 650 cans of soda a year. Although they can be refreshing and tasty, what they’re loaded with are empty refined sugar which turns to body fat almost immediately.

What all these sugary sodas does is they create havoc in the body, as they’ll cause severe mood spikes followed by a sudden crash because of the resulting low blood sugar.