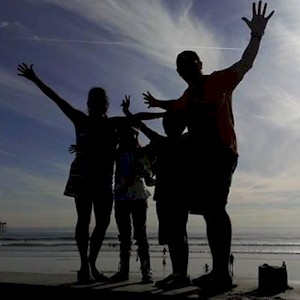 Some individuals just have all the grace. They’re well liked by everyone that they meet, they’re financially stable and attractive. What stands out most is their beaming sense of self confidence, this whenever they enter a room or wherever they may be. They have that certain presence which gives off positive vibes.

Not everyone is this fortunate. There are those who display low self worth, they struggle to maintain positive relationships, and often feel resentful towards those who are better off than they are.

So what’s the difference. How can one person be so incredibly successful while another person, perhaps their next door neighbor, constantly struggle just to get by.

The answer lies in what’s known as your invisible lifestyle. This is what made you into the person you are today. You were literally programmed with the habits and the beliefs that you’re projecting right now, or the one you refuse to follow.

How Were You Programmed
Look no further than your parents or guardians. They unknowingly programmed you to become the person you are. Unknowingly because they raised you to the best of their ability, this based on how their parents raised them.

You are who you are because of the brain wiring of your original programmers, your parents. As an adult, what you’re doing is duplicating the way that they lived when you were young.

For instance, say that you were raised in a household where both of your parents were always there for you. They took an interest and encouraged you in everything you pursued. You grew up witnessing your parents working hard every day, treating you and your siblings with respect.

As a result, you grew up to have a successful career and a happy marriage yourself. You take pride in working extremely hard and treat your spouse and children with respect, just like your parents did.

Not Always A Fairy Tale
Imagine a life where you grew up in a neglectful household. Your parents never encouraged you, or took any interest in anything you ever did. Your father had a negative outlook on life because of his own traumatic childhood, so all he knew was how to raise you the same way that his father did.

As a result, you grew up with a negative outlook on life. You have low self esteem because no one ever took the time to encourage you or took a genuine interest in you as a child. No, it’s not your fault.

You didn’t ask the “stork” to drop you into your parents lap. This is the hand you were dealt with in life, and now as an adult, you’re living out the consequences. But it’s not their fault either.

The Best Scenario… Hope
Let’s say you grew up in a bad neighborhood. Everywhere you looked, you saw poverty, crime, and hopelessness. As a child, you couldn’t wait to move out of the house. You saw your parents lifestyle, but you were determined to succeed and be nothing like them.

While growing up, you took all the necessary steps to put yourself through school and university, and now as an adult, you’ve developed a positive self image, and do everything within your power to remain financially stable.

Courage To Break Away
Those who embrace this lifestyle, break free, do so in defiance of their family’s values. They’re often branded as the “black sheep” of the family, and that goes for highly troubled families as well as for extremely successful ones.

This when a small town girl or boy goes on to pursue a successful career as a lawyer, or an accountant, while their siblings aren’t as accomplished, and pick up the same traits as their parents.

On the other hand, a child from a wealthy family could go against their parents values, by recklessly living and spending, and eventually filing for bankruptcy and dependency as an adult.

This isn’t placing blame on your parents. Your parents raised you based on everything that they knew at the time. It’s all they were equipped with. It’s not their fault, it was inbred in them genetically.

Programming: You Are Who You Are
The key is to understand and accept the fact that the negative values which you’ve absorbed from your parents, such as the fear of failure, low self worth, jealousy, are programs which are literally “wired” into your brain.

And if you have enough discontent with them, it becomes entirely possible to change that programming in your adult life. But realize this usually isn’t enough.

You also need to be aware of these programs and learn how to decommission them. You need to know what to do and how to do it, especially if these programs seem to dictate your behavior.

Reprogramming Yourself
Do you do things over and over that others might call self-sabotage. Are you attracted to a certain type of person you know you shouldn’t be with, yet you can’t help but feel attracted to.

The source of these behaviors is one or two negative programs from your childhood. These programs will prevent you or your loved ones from having a better life.

If your parents programmed you with some negative values that are causing you problems in your life today, it’s not your fault, but it’s your responsibility to do something about it.

You can start by thinking about how each situation in your life today is directly affected by your programmed past.

The more you discuss your childhood memories of the way things were, the more you become consciously aware of them, and the easier they will be to decommission.

Connecting The Dots
Over ones lifetime, most will not make the connection between their behavior as an adult, and how their parents lived, what their behavior was, this during their childhood.

They will accept their parent’s values without questioning anything, never knowing the real reason why they continue to make the same mistakes over and over again.

But now you know better. Don’t live your life blindfolded. Create a better future by identifying and then eliminating the values from your parents, the ones which are causing you problems today.