Google And Apple Lead The Charge In Mobile Advertising 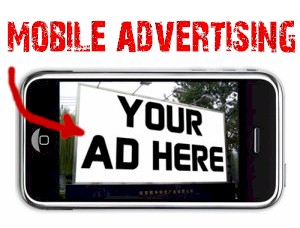 When it comes to mobile advertising, it’s no surprise that Google and Apple are making the biggest ripples, but there is a lot of room for others. As of now however, it seems mostly reserved for these dominant online players while online marketers or new startups may have a bit of an uphill climb to find a way in. This segment represents one of the most precise “ready to buy” consumers on the planet, as they are walking around on the streets and the local shops of the world with their smartphones in hand, constantly searching for instant deals, rebates, coupons and sales from neighborhood merchants right before they make a purchase.

So regardless of who participates, it’s expected that this year will take a gigantic leap towards mobile advertising. Not too long ago, Google as well as Apple were setting up shop on the online mobile advertising space with Google purchasing AdMob and Apple taking over Quattro Wireless.

Apple and their iAds didn’t even exist a few short years ago and Google’s Android OS is quickly being distributed onto a variety of smartphones and tablets. In 2010 alone, online ad spending, which included search as well as display ads, were close to $900 million, up 300% percent from the previous year. Mobile Ad sales are expected to be close to $2 billion this year alone. The future is so bright that the quick and the savvy are quietly capitalizing on advertising their products or services on mobiles while finding a specific niche before it really hits the mainstream.

When it comes to “Search Advertising,” Google absolutely dominates, but Apple is holding its own when it comes to mobile display ads, with both sharing around 20% of the market share. Millennial was close at around 15% percent. Some of the others grasping for market share include Microsoft Jumptap, Yahoo, Nokia and AOL being the most notable. So it appears as of now, that there’s Google and Apple, then there’s everyone else.

But as this mobile ad segment exponentially grows forward, there will be huge holes that will appear when it begins to demand better advanced technology as well as services that are currently used in the desktop computer world. These technologies and security issues will need to be adapted into the mobile world, is where the new start-ups can fill the gaps.

So Who Else Is Doing Mobile Adverting
[ad#co-1]
Many believe that there is yet another wave that’s coming when it comes to mobile advertising, as the industry is still new. The iPhone and the Android smartphones and recently the tablet PC’s didn’t even exist five years ago, so the future opportunities of this industry can only expect significant opportunities.

Moolah Media
Moolah Media came out of with guns a blazing when they initially launched their mobile advertising platform, and are now serving over 100 million mobile ad impressions while generating over 250,000+ targeted leads per month. The founders patterned their performance based mobile ad model similar to what’s happening in the online world. They first developed a mobile app which proved to be not that successful. They quickly realized that the only time they should get paid is when one of their advertisers closes in on a sale, develops a “worthwhile” lead, or in some cases makes an actual sale.

Transpera
Transpera is a media mobile advertising delivery network that caters to primarily video based delivery for mobile devices. They provide mobile video channels for content based publishers. Their mobile video advertising and delivery platform provides network operators, advertisers and owners of online content with a concise solution which will connect all the various pieces that’s required into profitable mobile video distribution.

MoPub
There are some mobile ad startups who may be making a push, such as MoPub, just because it’s lead by former Google and Admob executives. Their ad model however seems to be leaning more towards ad serving services on the Internet. MoPub’s original vision was that they seen the mobile advertising industry needed a true agnostic option that will serve ads for those who didn’t have a preference for a particular ad network.

So it’s probably really difficult to gauge who’s in or who’s out in the long term when it comes to mobile advertising, as there are new sites that seems to be popping up on a daily basis. But the end game is for the dominant Internet leaders such as Google and Apple to dictate how mobile advertising is going to operate.