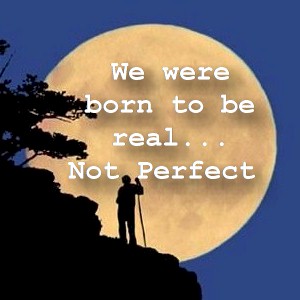 Attempting to be a perfectionist can dampen your pursuits. It can prevent you from progress, jumping ahead and taking advantage of job or business opportunities. Once we set ourselves with unrealistic goals or expectations, doing so can damage us personally and professionally.

Striving to be perfect can also harm our self-esteem because we feel we’re never good enough. So instead, it’s more advisable to adopting an attitude of reaching, getting better, striving for excellence.

Failure should be viewed as a stepping stone, as trying to be perfect can become a burden. One of the best known ways of overcoming perfection is taking some type of action, doing something whether it’s not the right thing to do. If it happens to be marketing, then show and tell the world ad lib, show your faults.

Don’t bother waiting for that perfect time, place, or state of mind, since the truth is that there never will be one. Everything you do should be considered a work in progress, so begin doing something, anything, now.

It’s okay and expected to make errors in judgement, and learn by you reacting on the constructive criticism, making all the necessary corrections and tweaks as you move forward and improve.

Making Realistic Goals
Unreasonably high demands on yourself or others go hand in hand with failure. You can’t expect to do everything perfect every time all at once, or provide the same type of consistent quality. Developing a plan on what needs to be done becomes top priority.

For every major project that you’re wanting to accomplish, break it down into smaller pieces which are more reachable. Smaller portions that you can easily handle and fits into the overall bigger picture.

Finding The Right Support
Find those who’ll support you and your ideas. Consider asking your friends, coworkers, or family members for their honest feedback on some goals or projects that you may be working on.

You might think that something’s not quite perfect, so it’s your support team that will give you their unbiased opinion. Never allow yourself to get too absorbed in what you’re doing, as you’ll get a distorted view.

Thinking It’s Perfect As It Is
Consider the mindset of whatever you’re doing is the right thing, and it’s the best thing at the moment. This attitude will make all the difference in creating a successful outcome.

Invite Failure
Redefine what failure is. Failure is natural and we fail more often than we succeed. Failure isn’t the end nor does it mean that you’re incompetent. Realize that failure is your mentor, a teacher, which can only help you innovate and improve.

Failure provides valuable information, clues, that you’re going in a direction which isn’t providing the right results that you’re looking for. Once you realize this, the sooner that you can focus in a different direction, a step closer to success.

Alter Your Attitude
The definition of perfectionism is the freedom from fault or defect, the state of being saintly. The words that we use to describe who we are or what we do, makes a tremendous difference on our success.

The best way to define perfection is adopting the attitude that you’re perfect just the way you are, at this moment.

Making Something Out Of Nothing
You’d be surprised that once you’re not trying to be perfect at all times, that you’ll often run into the perfect opportunity. For instance, you might not be dressed appropriately for an event, so you don’t feel “perfect” enough to network with anyone.

But you then begin talking with someone who’s standing right next to you who may be feeling the same way, the next thing you know, you’re networking and just created a potentially new business client.

Opportunities are abound everywhere. When you’re out shopping, when you’re standing in line for a coffee, you can run into situations where you least expect to, ones that previously didn’t meet your high standards.

Taking Action Is More Important Than Being Perfect
Once you begin doing things, deciding to take action, telling someone, anyone, what you’re able to do for them, is often a lot more valuable than worrying or attempting to make something perfect, this in the hopes that you’ll attract some level of success.

Most people aren’t attracted to perfection, they usually don’t care. What they’re attracted to are people that interests them, people who makes things happen or makes them feel good.

So if you’re constantly attempting to be a perfectionist in everything that you do in your life or business, then the trade-off is you’re not somewhere else that you should be, and making an impression.

So it becomes important to surround yourself with individuals who enjoy taking action, making mistakes. They’ll usually motivate you to do the same, while also being able to witness firsthand the results that they’re having by doing something.

Always Be Kind To Everyone
Especially be kind to yourself. Perfectionists will often begin feeling down on themselves for not achieving what they want, which is perfection. Perfectionism is more of an ideal and not a reality that’s possible to attain.

So begin by learning to forgive yourself whenever you do something you don’t like, or think isn’t good enough. Congratulate yourself for being you, for being human, that everyone makes mistakes, and that everything you do possesses your personal spin.

The Disadvantages Of A Losing Trader In The Financial Markets