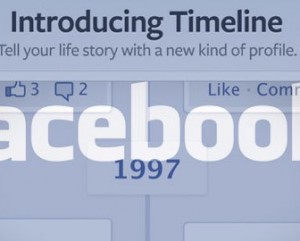 Once you as a member decide to use Facebook Timeline, what your doing is enabling online marketers and merchants to better target what products you like or own, and what you’re potentially looking to buy as a consumer. Facebook recently launched their visual story telling Timeline Application which makes it a lot easier for members to graphically share their personal information.

This includes what you currently own, what you have on your wish list, and what you’re considering to eventually purchase sometime in the future. As a result, what a number of savvy online marketers are doing is placing their product or service directly in the path of these members who has specified they have interest in their goods.

[ad#co-1]
As a result, these marketers are discovering that these Facebook members with Timelines are also increasingly clicking on their products, goods or services away from Facebook and going directly to their e-commerce sites.

The Facebook Timeline is an easy to use opt-in tool that replaces a users wall, altering their profile with a virtual and visual scrapbook which features a variety of chronological and graphical time lines of the various events of their lives on Facebook.

There’s also the opportunity for the Facebook member to share all of their interests that they choose to disclose, such as the concerts that they’ve attended or the brand of denim jeans that they like the best.

Once the member decides to use the Timeline app, they can immediately update the Timeline with all of their activities, in real-time, as they happen, while also being able to control which friends can see the updates as well as what appears.

Facebook To eCommerce Growing
Even before Facebook decided to introduce the Timeline application, the actual number of members who actually clicked from Facebook directly to an external eCommerce site somewhere on the Web was on an up surge according to Facebook.

This information is derived from a survey conducted on the various Top Internet retailers who claim that they’ve all experienced a traffic increase from Facebook, for some, growing over 200% percent.

Ever since the actual Timeline launched, these same retailers announced that the traffic has been even more pronounced. There are examples of Apparel retailers for instance, who has attracted members with a Facebook Timeline to allow them to directly click on their Page to specify whether they “Love,” “Want” or “Own” their product.

Since the January launch of the application, these retailers has seen their Facebook exposure and visitors increase by close to 20% percent more than their other channels, while experiencing a lower bounce rate than their Web customers.

These retailers are beginning to view Facebook Timeline as a viable method of driving forward their e-commerce growth. The actual number of first-time buyers who have clicked directly from Facebook to an external web page has increased close to 70% percent for some.

Other online retailers has experience similar results because of Facebook Timeline. When comparing approximately three weeks before the launch of Timeline, and the two weeks directly after, the retailer’s traffic from Facebook has actually grown by an average of 40% percent.

The number of members who are signing into their sites using Facebook Connect, which enables members to sign in while using their Facebook log-in, rose by 95% percent. It’s estimated that members who use Facebook Connect are close to eight times more likely to make some type of purchase from the retailer’s external site.

Interacting With Facebook Timeline
Every time a member happens to interact with a Timeline app, or anything else on Facebook for that matter, what they’re automatically doing is providing vital data which marketers can use to increase leverage, by allowing them to directly target that particular member with an ad.

Facebook recently began enabling advertisers so they can directly target members based on their actions on the network, even if the marketer doesn’t have a specific app to do so.

For example, if you’re a music label for instance, you could directly target a member with an ad for a particular recording artist’s new release based on the member interacting with a digital music service such as Spotify, who has a large presence on Facebook.

Previously, just the developer who had created a custom Open Graph app could target these members who happened to interact with the application.

Facebook Timeline Advantage Marketers
Facebook Timeline now offers more options that online marketers and merchants can use to leverage the wealth of personal information that the members share while on Facebook, to directly target and then market to these users with relevant ads based on Facebook’s rapidly evolving and expanding ad formats.

Facebook also recently launched a “Ticker,” which they call Sponsored Stories. What Sponsored Stories does is it enables companies to be able to highlight posts or actions which a members Facebook friend has made which is related to that advertisers product or services. What the Ticker does is it features updates on what a Facebook members friends are doing at that moment.