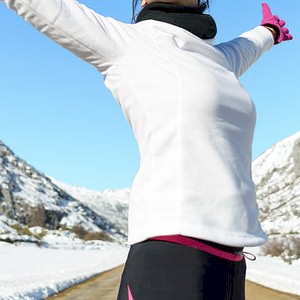 For those who are active runners, you need to get your fix which is the daily run, this regardless of the rain, heat, snow, or cold, you go out there and brave the elements. Nothing else is comparable to running as it’s the pure oxygen which flows through your lungs, which can’t be replaced by a stuffy gym.

So regardless of what the weather’s like, you’re determined to get that run in, even if the temperature dips below the freezing level while the roads become slick. You don’t bother thinking twice about not heading out for that run.

What the colder weather and the frozen icy terrain poses are additional risks by you accidentally slipping on a patch of black ice, or the added burden that your lungs and muscles have to go through.

Precautions For Cold Weather Running
The majority of runners don’t realize the actual real threat which sub-zero temperatures poses. In some cases, going for that run will do more harm than good, as one could easily turn an ankle which could put you out of action for months.

So cold weather running does come with a few precautions, inconveniences which are mainly focused on adapting to the elements such as navigating a slippy surface, wearing warmer clothing, and adjusting your muscles and running pattern.

On the body itself, you’ll initially get a general burning sensation in the throat passage and the lungs as you breath in, this when doing any type of vigorous outdoor exercise where the cold air creates a contrast.

The reason being that the body needs to intake and then adjust to the change in the degrees of temperature. This along with the warm breath exhaling from your mouth which hits your face during a run, increasing the risk of getting frostbite.

Preparing Yourself For A Winter Run
It’s thought that not all runners will take the proper extended time to prepare themselves for a winter run. There are a few facts along with some myths which needs to be established when it comes to cold weather running.

Does Cold Weather Running Increase Asthma Symptoms
Regardless if you currently suffer from asthma or not, it’s true that running in colder temperatures can aggravate forms of asthma like symptoms, this as noted by prominent exercise physiology experts.

These symptoms are a result of the breathing airways which dries up, that’s caused by the direct higher ventilation rate when running as you draw in more colder oxygen.

The airway surface liquid also slows down or is lost during the normal warming process, and when this much needed liquid isn’t replaced because of a higher respiration rate, there’s then a release of inflammatory mediators which can cause bronchospasm to occur in the lungs.

So it’s thought that if you do happen to already suffer from symptoms of asthma, then what running outdoors in the cold will do is potentially intensify the condition.

Cold Weather Running Results In “Frozen Lung”
The term “frozen lung” when it comes to runners strikes a bit of fear for those living in colder climates, for those who dare to go out for sub-zero runs. But you can put these fears to rest, as this particular condition that’s known as frozen lung doesn’t exist.

Once the cooler air begins to enter the body and lungs during colder temperatures, what the breathing passageways are forced to do is work a lot harder to heat up that incoming air, and as a result, may cause certain asthmatic conditions as noted. But know that the lungs won’t actually freeze, as that’s a complete myth.

Does Cold Weather Running Risk The Straining Of Muscles
What the cold weather does is it results in freezing the outdoor elements producing ice and snow, and what these conditions can and will do is change the interior running mechanics of your run, as you’ll begin using different muscles in the legs and hips.

As a result, there’s going to be an increased potential for muscle soreness from the different and altered mechanics. There’s also the increased chance of slips on the surface, or falls due to the slick ice, which forces the muscles to naturally tense up more.

There are some runners who don’t even realize that they’re actually altering their running mechanics while using different muscles, until they wake up the next morning extremely sore.

So if you’re planning on going out for that cherished run in colder weather after that first snowfall, make sure that you warm up adequately, this in the attempts of keeping all the muscles as loose and flexible as possible, and always make sure that you re-stretch after a run.

Running In Cold Weather Decreases Your Performance
It’s unavoidable that running in cold weather will naturally slow down your performance levels to a certain extent. It’ll make the muscles less pliable, which can reduce the efficiency and speed of the running.

You can help to offset this somewhat by doing a more thorough warm-up process indoors, while wearing additional layers of breathable clothing before heading out for the run. But don’t expect to reach any personal best runs when in colder temperatures, while you’ll also sweat less.

It’s also important that you perform your cooling down process after the run indoors if possible. What the body will do is cool down extremely quickly if you remain outdoors after the run, and this sudden change in body temperature will cause excessive stress on the body, possibly producing chills.