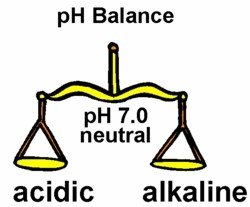 So you’ve been scouring the Internet looking for ways on how you can achieve that perfect pH Balance Level. What’s Acidic and what’s Alkaline? To get this proper balance, there can be conflicting information such as some sources which will list certain fruits as being alkaline, while others may state that they’re acidic. So who’s right?

The abundance of inaccuracy in reporting on which foods you should be consuming may leave you confused and tired of deciding what’s right or wrong. For those who are starting off fresh on this subject, without judgement, may have the best advantage.

As you begin to sift and sort out the rampant amounts of misinformation which includes lists of foods to eat, guidance charts and guidelines that you should be following to achieving that perfect pH level, it can become overwhelming. So listed are the top myths regarding what’s pH Acidic and what’s not.

Is Coffee – Acidic Or Alkaline?
There are reports stating that certain coffee brands are alkaline, while others are acidic. The truth is that all forms of coffee are actually acidic. What’s worse is that certain brands of coffee which may have been sprayed with pesticides may be even more acidic.

So reports to the contrary are completely misleading. Does that then mean you should stop drinking coffee? Well, no. Just be aware that drinking excess amounts of cafe is acid-forming, so just keep it at a minimum. Consuming actual alkaline based food stuffs will actually perk up your energy more than coffee anyways.

Another myth regarding coffee is that drinking the coffee black or on an empty stomach is more alkalizing than drinking it with cream and sugar, or on a full stomach. Sorry, both are not true.

Chronic coffee drinkers most likely invented this myth just to justify their habit. Any form of coffee, once it becomes metabolized, has acidic effects on the body.

Consuming Dairy Products Are Alkalizing
In certain lab tests, some dairy products may actually test as alkaline, but, like any other animal based product, the majority of dairy based foods are actually acid-forming in the body once they’re consumed and absorbed.

Lemons Are Extremely Acidic
This one myth is not true although lemons actually do contain acid. There is however a difference between something that’s tested acidic by itself, and something which has acidic effects on the body once it’s digested.

While lemons will obviously test acidic by themselves, but once they are combined with your own digestive juices and then metabolizes, the chemical combination will make it alkalizing, so they are an excellent way of balancing your pH level in your body.

So it’s strongly recommended that you add pure squeezed lemon juice directly into your drinking water and then consume it throughout the day.

Tomatoes Contain Acid
Tomatoes may appear acidic when you first bite into one, but similar to lemons, they also have a positive alkalizing effect on your body once you eat them. So your free to enjoy that excellent plate of hot house tomatoes or that fresh home made tomato pasta sauce.

The Majority Of Protein Based Foods Are Acidic
We all tend to think meat is the only viable source of protein. But if you ask any vegetarian, “Where or how do you get your fix of protein?” you will then realize how false this myth is.

All fruits as well as vegetables contain levels of protein, as do beans, grains and other natural foods. The majority of animal protein is acidic however, but the majority of natural vegetarian based sources of protein foods are alkaline.

The “Millet” Grain Will Naturally Balance Your pH Level
Millet, which is in the grain family, claims that it will automatically balance your pH level. While it may be an excellent idea that one certain food is able to magically balance the acid and alkaline in your body, there is however not one single food source which is able to do so.

Eating Whole Grain Breads Are Alkaline
There are actually only a few different types of bread which are alkaline. There are also only a few grains which has the potential to be alkaline. Any bread which are made from any of these grains would have to be devoid of shortening, yeast, margarine or butter, preservatives, and wheat or white flour.

The majority of the bread that’s store bought contains most of this “junk” in them and they should be avoided. There are ways however that you can make your own bread at home, even without a bread maker .

All Fruits Are Completely Alkaline
On the surface, this appears true, but unfortunately, most fruits are actually acidic. However, it’s a healthy type of acid, so it’s recommended that you include healthy servings of fruits in your daily diet.

There are a group of fruits and vegetables such as, lemons and limes, grapefruit (provided they are not excessively sweet or sweetened), avocados and tomatoes which are recommended. They all have alkalizing effects on the body once consumed.

The Difference Between Acidic And Alkaline Forming Food
Determining and testing which foods while in a clinical setting such as a lab, to find out whether they’re acidic or alkaline is generally pointless when discussing pH balance. This is because the testing does not take into account the reaction it has during actual digestion.

It is the exact reaction and interaction between a certain food and our own digestive enzymes which determines if a food has any alkalizing or acidifying effects once they’re consumed.

For example, Lemons since they are extremely tart, tests as highly acidic in lab testing. But once they’re ingested in the body, they suddenly have an alkalizing effect.