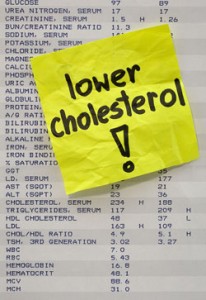 Physicians, your local family doctor or health practitioner all agree that if the levels of the fatty substances, known as (LDL) or low-density lipoprotein, which are also referred to as the “bad” cholesterol is too high, it’s not usually a good thing.

If they happen to be too common in the blood stream, the LDL will then eventually harden itself into plaque, which will then stick on to the artery walls. This as a result will make all of the circulatory organs work that much harder.

Once the plaque begins to build up, the arteries will then begin to narrow, which results in the restriction of the amount of oxygen based blood that’s able to reach the heart. This as a result can usually cause heart disease or even cause a stroke if untreated or undetected.

HDL or the High-density lipoprotein, also known as the “good” cholesterol, helps the body in getting rid of the bad cholesterol by picking up the excess LDL cholesterol and then shuffling it off to the liver, where it’s then broken down and eventually eliminated.

[ad#co-1]
The Natural Treatment Of High “Bad” Cholesterol
Red yeast rice is an excellent natural food source which contains plant based sterols that are able to block cholesterol absorption. Recent studies have shown that patients actually lowered their total cholesterol count by up to 25% percent after taking around 2.5 grams of this supplement on a daily basis.

Taking 4 to 6 grams per day of Omega 3, which is naturally found in fatty fish as well as flaxseed, also elevates the HDL count while reducing the artery-hardening triglycerides.

Natural Chinese Medicine To Lower Cholesterol
There are expert traditional Chinese practitioners of herbal medicine who claims that once the channels of the liver or the spleen becomes blocked by various excess fluids, it can then hinder the direct flow of qi, or energy that goes to the blood vessels.

The flow of good qi helps in the expelling of “bad” cholesterol so it’s not absorbed directly into the bloodstream. Improving digestion as well as better blood circulation will help in doing this.

Natural Treatment Methods: The Chinese herb known as shan zha or hawthorn berries can help in one’s digestion while enhancing circulation. But it’s advised that if you happen to be taking any medication for say heart disease or any other ailment, that it’s always best to consult with your doctor first.

Begin by pouring hot boiling water over half a tablespoon or around 6 grams of the herb and allow it to steep for around 15 minutes. This produces a nice sweet-tasting tea. Drink this twice daily as well as eating the dried berries which are left over in the cup to get maximum effect.

You can also improve blood circulation as well as qi by beginning to move around using certain energy exercises such as qiqong or tai-chi.

Cholesterol Facts
There are nutritionists who claim that there’s approximately 5% percent of the general population who actually has been genetically predetermined to have “high” cholesterol.

The remainder of us are able to control our cholesterol with proper diet and consistent exercise. So changing what you eat is therefore a lot more effective as well as a lasting solution than taking doctor prescribed medication.

Improving Your Diet For Lowering Cholesterol
Begin by eliminating all of the sugars from your daily diet. Sugar in all forms is an extremely inflammatory food, so the body will naturally create cholesterol in an attempt to patch up and then repair the arterial damage which is caused by the sugar based inflammation.

So basically, high cholesterol can be seen as the direct response to the inflammation resulting from a bad diet which is high in sugar, fats and starch.

Instead, try eating a diet which is full of lean proteins as well as fiber-rich foods. What lean protein does is it will stabilize your blood sugar, while keeping you full and signaling your body to burn excess fat.

High-fiber based foods, such as beans, oats, brown rice and barley, binds excess “bad” cholesterol in the stomach while moving it out through the digestive tract.