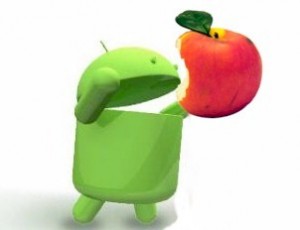 There are a few mobile industry insiders who claim that they know why the highly anticipated fifth generation Apple iPhone may not be released until late summer or early fall, this as per speculation based on a few of the iPhone’s product manufacturer suppliers.

Apple has already reportedly shipped out an astonishing 17 million units of their iPhones just in the first quarter of this year. But the news that Apple may not like hearing is that during the same time period, there has been over 36+ million Android enabled smartphones which were shipped out.

The Android OS’s steady rise in popularity may suggest that Apple’s once firm, iron fist, kung-fu grip on the mobile smartphone market may be slipping just a bit. But if past history repeats itself, Apple may just begin offering and thus flood the market with their current iPhone 4 at a lower selling price when the newer iPhone v.5 eventually hits the streets.

Apple has a habit of decreasing prices of any previous generation models of the same device, when the newer version is launched, so there’s no reason why this trend won’t continue. It would also depend on how significant the improvements are on the iPhone 5, to see how much of a price reduction that can be realized on the iPhone 4, or even if it will even continue to ship.

Fighting Back The Androids
Apple may possibly need to do a lot more from being potentially overtaken by Android’s rapid growth. The actual shipment of Apple’s iPhone grew around 17% percent, while the Android smartphones grew around 35% percent during the same time period.

Google has also recently stated that they were activating over 375,000+ Android based smartphones every day, and now has more than 110 million of the Android OS enabled devices which are active on the market.

There are also now over 225,000+ free or paid Android smartphone specific apps which are currently available on the Android Apps Market. There are over 5 billion of these apps which are installed on the various smartphones worldwide.

LTE May Also Hold The Edge
One of the biggest factors which may give the Android based smartphones a potential edge over Apple’s iPhone, is their continuous ongoing transition towards LTE. Currently, the LTE modems are consuming too much power to be able to meet Apple’s current battery life requirements on the iPhone, and thus may not be available for the iPhone 5.

Still, in traditional Apple fashion, they’ve expressed absolutely no sense of worry or urgency when this topic was brought up recently. The first generation LTE chipsets may be forcing too many design compromises or changes on the iPhone 5 handset, and as a result, these changes may just be too significant to make on the next version of the iPhone.

Reasons Why The iPhone 5 Launch May Be Delayed
[ad#co-1]
Apple possibly postponing the release of its iPhone 5, which was expected to be early summer, will allow the Android based smartphone makers, as well as Microsoft, the opportunity to grab additional market share during this period, all at Apple’s expense. Mobile phone analysts predict that Apple is expected to sell just over 15.5 million iPhones during this time span.

Most think that Apple won’t be shipping their Fifth Gen iPhone until early fall, as several iPhone equipment suppliers has indicated that any orders for new equipment, which may be specific for the iPhone 5, has been delayed a few months later than usual.

Also, there was an increase in smartphone handset inventories which occurred recently. This overstocking of hardware components is due to the response and initial panic of the the Japanese earthquake, which caused a worry over potential product supply shortages. However, it appears that the earthquake did not seem to have any impact whatsoever on Apple, this according to their statement.

But, there are those who think that it’s completely possible that the supply issues of product availability, which may be related to the earthquake, has indeed affected Apple’s hardware supply and thus the delay of the iPhone 5 release.

So whether Apple and the iPhone 5 is frantically attempting to support LTE, or making additional last minute tweaks are all possible contributors to the delay. There could also be some iOS software issues which won’t or can’t be ironed out in time. All of these issues can be valid reasons for the delay of its release. There are no tangible reasons or industry insights as to why or which of these groups are responsible or contributing to the release being held back.