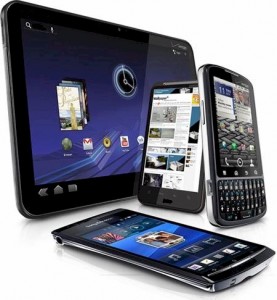 Not too long ago, as in a couple of decades, everyone just primarily used a land-line rotary phone, and their only source of news was printed on a newspaper or heard on radio. They also had to physically stand up and change the channel back and forth on their black and white TV with an antenna.

And then suddenly, almost seemingly overnight, as if the entire planet was suddenly brainwashed, cell phones, computers and lightening quick Internet connection exploded in popularity and became affordable enough to be made available to everyone.

It’s now just commonplace and actually a rare sight when someone doesn’t have use of some type of a Mobile Device. The current technology has significantly altered the landscape on the way people communicate as well as consume information.

[ad#co-1]
Mobile Internet Technology
It was just inevitable and a matter of time when these two significant technologies, mobile devices and Internet access came together, and this union has been extremely quick.

There’s absolutely no doubt that the biggest change on how users now consume content is related directly to the popularity of mobile device usage and how quick they can access it on the Internet.

This refers specifically to Smartphones and Tablet PC’s which is spearheaded by Apple, and combining these devices with the lightening quick speeds which are offered by Wi-Fi, 3G and 4G Internet access.

These rapidly evolving mobile connectivity technologies now makes it possible for anyone to easily access the Web from absolutely anywhere and at any time. The availability to literally an endless supply of new or breaking content is now just a fingertip away for virtually every mobile user.

Content Publishers Need To Keep Up
So for all of the content publishers who are providing information online, attempting to keep up and staying current with all these changes is critically important in maintaining as well as establishing success on the Web.

So whether you’re operating an information or news blog, a photo or a video publishing site, an online magazine, or any other online publishing method, the chances are extremely good that someone, somewhere is attempting to access your online content by using some type of mobile device. And this trend is expected to grow exponentially as these devices and technologies become more prominent.

Content Is Now Everywhere, Anyway And Anyhow
Although the mobile Web is still relatively an infant technology and experiencing growing pains, it’s already altered a dramatic shift towards the way which users are able to access as well as consume content.

A survey in mid 2010 revealed that there was a 33% percent increase in the consumption of electronic data which was used by mobile devices over the previous year.

Also, the same mobile trend consultancy group predicted that traffic used by mobile devices is expected to grow by at least 319% percent in the next few years. Currently, it’s estimated that mobile browsing on the Web makes up for 15% percent of all Internet browsing globally, but that number is growing daily.

Since all of the mobile traffic doesn’t come from mobile phones, there is also an increase in consumer usage of tablet PCs, which will also experience exponential growth.

These larger mobile devices are beginning to play a vital role in driving up mobile Web traffic, this despite only 11% percent of North American consumers actually own tablets, but this number is expected to skyrocket as the prices continue to drop.

The growth in usage is expected to be substantial, with the various survey groups projecting that close to nearly 24% percent of consumers are expected to own tablets in the nest 12 months, this because of devices such as the affordable Amazon Kindle Fire Tablet PC.

What should be noted is that the majority of these Tablet owners, over 88% percent, use their devices strictly for accessing online content. By comparison, there are only 42% percent who prefer using their desktop computers to engage in the same information that’s published online.

The most probable reason is because the design of these tablets allows for the ease of reading online streaming content, this due primarily to their flat magazine like shape and their portable size. They are also being fitted with the appropriate apps which are created strictly for distributing online content.

For Internet Content Publishers
This rapid migration towards mobile may place a severe dent into the traditional dominance of desktop computer based content, which has been for the longest time the only option available for users, and this ever since the Internet was first starting out.

Now, content consumption trends dictate that online publishers are required to provide sites which are usable for the desktop computer, tablet PCs and the much smaller smartphones.

Creating a mobile-optimized site however can be a time consuming and at times a stressful endeavor. So Web publishers are now required to manage multiple platforms when publishing their content, as well as catering their information to fit the various platforms.

For instance, the traditionally long winded “how to” type of information articles written for desktops now need to be altered to be short and precise content. This information, while still providing the same basic information, needs to be simpler and easier to navigate for the tablet and smartphone users.

To resolve this, to provide content for the various platforms, there are now numerous content management methods which offer publishers systems of automatically rendering their content sites to accommodate for the mobile devices. It’s a matter of altering the sites so that the content will be properly optimized for the smaller portable mobile screens.

For Web publishers who don’t use a Content Management System, there are a variety of integrated development environments which allows them to build apps for mobile devices, along with for traditional desktops and browser apps as well.

Some of the sites which offers cross-platform mobile development tools which are available for website owners include web development vendors such as, RhoMobile, PhoneGap and Appcelerator.

The Development Of Apps
As well as developing mobile based browser sites, there’s another step which can be taken by creating applications for mobile devices. These apps are built to distribute content which also provides design optimized usability for the users to consume content.

These can be advanced, feature rich applications such as the one’s provided by major media outlets such as The New Yorker, The Daily and yet more premium content rich focused apps such as what’s offered by USA Today.

The Mobile Future Is Here… Starting Today
The Internet as we once knew it has suddenly become drastically different, even from just a few short years ago. The technology of the Web as a content consumption vehicle, above all else, has evolved to meet all of these changes.

Content publishers will need to keep up and recognize these new developments and then learn how to adapt their traditional online distribution methods to meet the newer users, and how they’re currently accessing Web content today.

This means appealing towards all of the mobile Web users and complying to the constant ever growing number of users who are always on the go and as a result has shorter attention spans to absorb information.

So you’ll need to utilize the features of a CMS, such as WordPress, or take a DIY approach and turn your “desktop” based content Web properties and convert them for mobile device consumption. This way, you’ll be ensured to have complete control when distributing your content, and that it’s consumed by all of the available channels.

Starting The New Year Off With A Happier Healthier Bang

Know The Differences Between The Good Fats And The Bad Fats