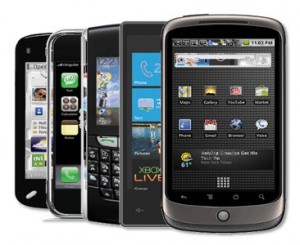 The new and improved Smartphones which are now available by the various manufacturers are increasing in popularity because of their better functionality, features and lower costs. According to the latest statistics, smartphones, which accounted for a less than 19% percent of the entire portable handset market just a few years ago, now accounts for over 65% percent of all mobile phones sold worldwide, and is soon expected to be over 90% in the next few years.

These smartphones are predicted to soon experience exponential growth as they continuously increase their market share, which ultimately forces the prices down due to demand and competition. They are expected to completely envelope the space which was once occupied by the feature phone market.

The Benefits Of A Smartphone
One of the most obvious distinctions between a smartphone and basically any other mobile based phone is its ability to operate on an advanced web enabled mobile platform, which is superior to any other mobile device available.

The major players in this group include: Apple’s iOS, Microsoft’s Windows Phone 7, Google’s Android OS, and RIM’s BlackBerry OS. There are other smaller platforms as well, such as, Nokia’s Symbian and the Linux-based MeeGo and the Maemo.

One of the greatest features of a smartphone is that they’re designed to allow the users to be able to run third-party software applications which are available for download from the various exclusive platform based app marketplaces.

Some of the other significant benefits of smartphone’s include:
• Internet connectivity which allows for instant and portable emailing, texting, and Web access
• The ability to capture, share and send photos and videos
• GPS navigation
• Digital compasses, and a lot more

Although the smartphone owners overall user experience of the mobile device is usually defined and dictated by the OS platform that’s used, it’s also important to note that these smartphone manufacturers have a say, thus making an impact on what’s ultimately available on the device itself. This especially for the Android OS platforms.

Apple Still Leading The Pack
The trendsetting Apple with their iPhone, as well as RIM with their Blackberry products, develop their own respective Operating Systems for their smartphones while manufacturing their own hardware as well.

So each and every genuine iPhone that’s sold anywhere in the world, from a hardware and a software standpoint, are all completely identical out of the box. With each and every new OS iteration, Apple as well as RIM will launch new smartphone models which displays the latest features.

As the new upgrades of the OS for these smartphones appear, however, the older outdated models tends to get left out and eventually gets phased out.

Then There’s Google And Microsoft
The other major players in the smartphone market are Google and Microsoft. What they both do is rely solely on third-party based hardware manufacturers to develop and create the actual hardware which runs on their Google Android or Windows Phone 7 Operating System’s. Google is however expected to offer their own hardware sometime later this year.

The various smartphone hardware manufacturers such as, Samsung, HTC, Nokia, Motorola (Google), and LG develop the hardware while working with the various carriers such as Sprint or AT&T etc., to get their own modified version of the Android OS installed on their devices.

Both Google along with Windows meanwhile continues to work on improving their respective OS versions, making them compatible with as many hardware devices and screen sizes as possible.

To make their particular mobile device stand out, the majority of these manufacturers will also include various software tweaks to give their smartphones their own unique feel and look.

For instance, Samsung when offering their smartphones uses a technology which is known as TouchWiz interface, while the HTC based smartphones offers their HTC Sense interface.

The proprietary RIM BlackBerry smartphones, unlike Apple, Google, and the Windows smartphones, offers a much greater and wider assortment of designs, screen sizes, and different features.

Best Features Of The Various Smartphones
With all of these major smartphone developers and manufactures, they all offer a similar uniform list of specifications, but there’s also features which sets them distinct from each other.

• Apple and their iPhone for instance are known for being innovative as they allow their users to be able to manage or purchase audio and video content using their proprietary iTunes software.

• One of the better features of Google’s Android based mobile devices may be the sheer number of models which are available, beginning from affordable to over the top expensive.

• BlackBerry when it comes to mobile phones, have a reputation of being more business orientated, offering superior and much more reliable email and messaging features.