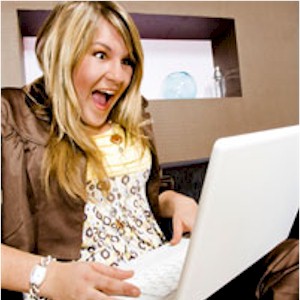 At one time in our lives, we were financially expected to keep up with our neighbors and our peers, the Jones’ of the world.

But because of the Internet, this competition has turned to ourselves, our own online alter ego persona’s that we’ve created for ourselves.

This because the Internet, along with all of its related technologies have successfully turned currency, such as paper money, into something that’s completely intangible and virtually invisible.

With money now being virtual, what that does is it removes all of the barriers and preconceived notions of what an actual piece of plastic credit card, or hard paper currency once represented. Money and its evil twin sister, debt, once held true repercussions if we defaulted, damaging our personal financial health.

It’s also completely plausible that the Internet is playing a role in the Latest Economic Recession in this age of virtual everything. While online, we begin taking on a completely new presence which adds to our e-personality.

We begin to behave as well as transact differently, proving that we can be different from how we previously were. These online personality traits which are created in our online “alter egos” display grandiosity, the sense that there is infinite potential, and that we can accomplish anything.

We become narcissistic, thinking of ourselves as the vital cog of the World Wide Web. The consequences of adopting this new online personality, we feel a lot more important, potent, and become spontaneous.

When it comes to spending online, the effects also become less concrete. Fueled by the same impulsive notions, it becomes much easier to feel special when online, deserving, as well as immune to debt, and we shop accordingly.

The Internet Makes Us Think Big
On the Internet, we can easily create that bigger than life personality of ourselves, giving us the ease of illusion that anything we want is a shortcut to realizing them.

There was a recent study which surveyed over 1000 online consumers, where the majority were considered compulsive online shoppers. The researchers attempted to determine what the prompts and factors to their overspending were, which caused the pathological shoppers’ to go on these ballistic online shopping sprees.

It was found what actually triggered compulsive online spending behavior was the prospect of gaining something, quick and easy. The potential possibility of one feeling a lot better than one’s old self before the purchase.

Compulsive shoppers who shop online do so because they think it gets them one step closer to what they think their ideal “Internet” image is. As a result, these researchers are suggesting efforts need to be made regarding awareness on the financial, as well as the psychological pitfalls of impulsive online shopping.

Compulsive Online Shopping Becoming A Problem
Some of these researchers are recommending psychotherapy for these chronic shopping habits. Really? Online shopping and e-commerce when it was first a concept a decade ago, was thought that it would make the buying process a lot more rational.

Rational by eliminating all of the marketing distractions of the traditional “brick and mortar” stores, facilitating product as well as price comparisons, reading reviews and ratings, and making sound no pressure buying decisions.

But instead, what we now find online is a virtual bazaar where we’ve become completely out of control, feeding our online alter egos. The buying process and transactions are now so removed from actually handing over hard earned cash, or even a physical plastic debit or credit card, that it doesn’t feel like your spending any money at all. So the result is we spend more freely and then go in debt.

The Internet Makes Us Fearless Of Spending And Debt
Being in actual “debt” stopped scaring these online shoppers since money seemed to stop being real. It’s believed that the massive debt which was accumulated by these compulsive shopping individuals actually contributed to the current recession.

There is a lot of money from these online purchases which was owed and never repaid back to the banks, which was just as painful as the compulsive buying binges which preceded it.

The reasons of our fiscal predicament cannot be solved by the financial experts or economists. But the very idea that the Internet has made money completely invisible, by making it virtual, and completely abstract than its ever been before deserves serious consideration.

That’s why there are many who are living beyond their means and also had a hand in the recent recessionary bubble, this to the tune of two trillion dollars of debt which subsequently evaporated and was written off.

Blame this directly on the perception of fake money that the Internet has created, dollars which has nothing in common with with any other type of currency or economic model which was invented before them.