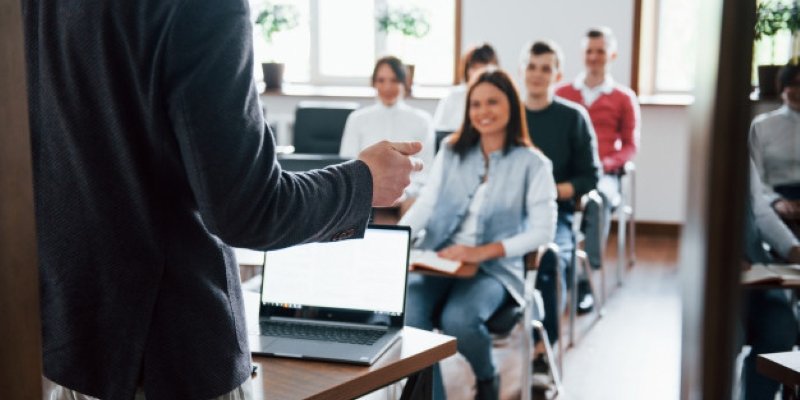 A professor of philosophy stood before his class, silently waiting as the last of his students filed in and found their seats. With a number of different items on the table in front of him, he waited patiently for the last bell. He then lifted a large empty glass beaker over his head for all to see.

Like a magician showing there was nothing up his sleeve, he panned the corners of the room then placed the beaker back on the table.

He then began filling it with golf balls, one by one, they bouncing off the bottom of the glass container.

When finished, he raised the beaker over his head and asked. “Who among you will tell me this beaker is full of golf balls?”

The students, anticipating it’s a trick question, all slowly raised their hands looking around at one other. A few answered yes, out loud.

Everyone Agreed The Beaker Was Full

The professor placed the beaker down on the table and continued. He picked up a pail of pebbles and poured them clanging into the glass container as he looked over his glasses at his class.

He gave the beaker a shake, as the smaller pebbles dutifully settled into the open spaces around the golf balls.

Then he poured in the rest of the pebbles up to the brim of the container.

He raised the beaker filled with the golf balls and pebbles above his head and asked again. “Who among you will tell me this beaker is full?”

There were now an uncertain show of hands, and a smattering of silent yeses, as many confirmed the beaker was now indeed full.

The Professor Looked At His Befuddled Students

He then raised the beaker above his head once again, as a quiet of wonder filled the room. He placed it back on the table and reached for another container, and poured its contents into the already full beaker.

The students in muffled mumble and wonder, watched grains of sand find their way into every void left by the irregularly shaped pebbles and golf balls.

He continued until the glass beaker could hold no more. The room became hush as the students anticipated the next question.

Now, too heavy to lift the container, the professor stepped back and asked again.

“Who among you will tell me without a doubt this beaker is now full?”

Every student in the room shot their hands in the air, certain the glass was now full and the pay-off was about to be revealed.

Showing a hint of a smile, while the professors eyes were still fixed on the students, he reached below the table and produced a large cup.

He held it up for all to see and poured its entire contents into the glass over the golf balls, pebbles and sand.

Everyone watched intently, as coffee filled every last crevice the grains of sand had not.

Moans And Laughter Filled The Room

Now! the professor bellowed, “I want you all to look at this glass beaker as your life. It is strong enough to hold all of its contents inside, yet frail enough to be destroyed with one careless move.”

The golf balls, he continued, represent the most important things in your life; your family and friends, your faith, your good health and your passions.

Things that if all else in your life were lost, you would still remain full.

The pebbles represent other things in life that are important to you such as your job, your house, your car and the rest of your most important material possessions.

The sand – the sand is everything else that makes up your life.

The Sand Is Insignificant

The professor stood in front of the class, pointed down at the beaker and in a serious, almost angry tone declared a warning:

“If you fill your life with the small stuff first, there will be no room for the things that are important in your life, like the things these pebbles represent.”

“If you fill your life with material possessions, there will be no room for things that truly gives your life meaning, like the things these golf balls represent.

He then began to pace the floor in front of his class. He suddenly stopped, looked at his attentive students, removed his glasses and said softly.

He suddenly slammed his fist down on the table. “The point is to pay attention to the things that are critical to your happiness.”

Enjoy your family. Love your brothers and sister, parents, cousins, aunts and uncles. Appreciate your grandparents if you are still fortunate enough to have them with you.

Also take time to take care of yourself – your health, your peace of mind and your emotional stability. Without these things you are nothing.

There will always be time to play, to go to the mall, to watch television, to relax.

But you need to learn to appreciate the air you breathe, the ground beneath your feet, the roof above your head and the stars beyond that.

You see my dear students, everything else beyond that is just sand.

One student then raised his hand and asked. “What does the coffee represent?” The professor of Philosophy smiled. He seemed satisfied his message got through.

“I’m glad you asked,” he said, returning his glasses to his face. “That’s the one thing I want you never to forget.”

He collected his papers and bag, looked up at the group and said… “How ever full you think your life may seem, there’s always room for a cup of coffee with a friend. Now go live life. Class dismissed.”

Clinical Ways On How To Improve Your Intelligence