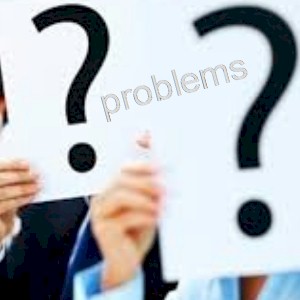 Problems, issues and their solutions has a habit of exposing themselves and smacking us flush on the backside, this when you least expect it, and is a part of our everyday lives.

They have been a source of motivation since our birth. Some of these problems will remain with us throughout our lives, or somehow be resolved before the twilight of our existence.

They can also be a reason for getting upset or frustrated. For some, just the very thought that these problems may arise, just the anticipation is considered a source of fret. The stem of most problems also isn’t because of the result of being good or evil, or because of karma.

For any of these problems which arises, regardless of their objective or foundation, whether happy or sad, happens for a reason and to everyone, and usually when you’re not expecting it.

At times, even despite using our best judgment or careful planning of our reactions or our avoidance of these issues, the problems will persist and continue to hit us in varying unforeseen degrees.

How To Conquer And Solve Problems Head-on
• Tracing The Root Of The Issue – The best way of finding the solution to any problem is by attempting to trace back and then flushing out the core of where it began, going to the root of the source.

If you find yourself driving down an unfamiliar road and realize that you’re lost, you know that you’ve took a wrong turn somewhere along the way.

So logically, you go back and retrace your steps and then discover where you initially made the mistake, pinpoint where the wrong turn was made. This way, you’ll be able to decide where you got off track and then take the proper path to get to your destination.

• Never Sweat The Small “Stuff” – True that this is a common term, but all the little problems are best dealt with by just shrugging them off since they just consume too much of your time.

So don’t be a victim by becoming a drama queen and focusing on each and every irrelevant issue which crosses your path. Breaking a nail or having one of those bad hair days isn’t a good enough reason to break into hysterics.

Sure that these smaller problems are annoying and has the potential of escalating, but just keep an eye on them or get over it. You may be surprised by how just a small alteration in attitude can help when it comes to solving these issues.

In fact, the majority of these problems will usually just dissipate, solve themselves, and will then dissolve into thin air once your attitude is adjusted.

So instead of focusing on the negative consequences of your life, and then becoming cynical as a result, attempt to make the best of every situation instead.

If you’re not completely satisfied with the situation that you’re currently in, you should then strive to make some positive changes in your life to correct them.

Immediately Confronting Your Problems
Ignoring and not confronting the major problems which arises can compound towards bigger issues. Before any of these problems can be solved, they need to be broken down and dealt with properly.

For instance, someone who’s insisting that they’re not sick or injured when it’s obvious that they are, or are actually hurt, isn’t helping to solve the problem at all.

In fact, what they’re doing is just making the situation worse, this especially if they refuse to seek out the proper medical attention that they need as a result.

Once someone begins to ignore obvious problems, what can happen is that they’ll just escalate into much bigger ones. Some will just choose to escape or ignore them, which can then lead towards other self-destructive behaviors.

These problems which they’re encountering then becomes hidden or masked, which can then compound into potential disaster. This then in turn escalates and becomes a part of the problem at hand. Then they’ll just usually take on a life of their own.

Don’t Be Afraid To Ask For Help
It’s well known that strength usually comes in numbers. One of the best known ways to solve a problem quickly is to just simply ask for help. This is where friends or family, or professional help comes in.

They’ll not only be able to physically help you out somehow immediately, they can also at times be a source of emotional support as well.

They should be able to offer some new perspectives, fresh ideas, or different thoughts which might just solve the problem, or be the key to finding the solution to them.

Having problems arise, regardless of how big or small they may appear, doesn’t necessarily mean that it’s the end of the world. It just means that you need to get to work finding the solutions to these particular issues.

Everything happens for a reason, as the law of cause and effect goes into action. Begin by just following this process, and not only will you begin to effectively solve your problems, you can also gain a lot of wisdom through this new found knowledge along the way.