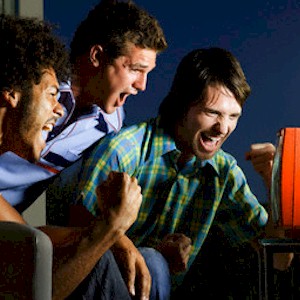 It’s here, this is when most males will retreat into their man caves with their buds, and hunker down to watch sporting events on TV. The Fall is the time of year when the sporting universe aligns, where a smorgasbord of exciting games occur simultaneously.

The excitement of the hockey and basketball seasons starting up, soccer is winding down as they fight for playoff positions, the baseball playoffs are batting for the championship, while football is as dominant as ever. This is couch potato paradise.

The sports fanatic lives and dies watching their teams on TV. One can park themselves on the chesterfield with their remote in hand all day Sunday and vegetate. It has become an epidemic, bordering on becoming an addiction if not a habit.

The Avid Sports Fan
The sports fan comes in all shapes and sizes, are dense and devoted to watching their favorite athletes on TV competing, punching, swearing at each other, all for the sake of winning.

Chronic sports fans are known to engage in a variety of behaviors which may appear neurotic, if not bizarre to those who don’t enjoy watching sports that much.

They’ll devote their entire weekend putting every motivation on hold, while betting away their savings, investing all their mental and emotional capacity to supporting their favorite team.

Sports A Curse
Women who are dating or living with an avid sports fan knows the pain. Those who don’t share this dedicated worship of the mighty sport, find this behavior annoying and grounds for divorce.

What’s also generalized is that all diehard sport fans are male, but there are plenty of female fans as well. Whether rooting for their hometown team, or more passive sports such as soccer or baseball, women are known to have maniac allegiances as well.

Waiting On The Sidelines
But most become a sports widow or single because of the frustration, or will attempt to preserve the relationship by putting up with the madness, becoming the designated chicken wing and nachos cook, while fuming in the kitchen.

What usually occurs is constant conflict and fighting if they hate watching sports. Those who are mildly invested with the sporting event or root for the home team they’re following, are more dismissive and forgiving.

If You Can’t Beat Them Join Them
This is the easiest way to get over relationship conflict, and no you’re not “surrendering.” Just join in the fun. Begin by learning the basics of whatever sport your partner’s obsessed with.

Research online, learn about the rules of the sport. This will give you some familiarity, so you’ll have some idea. There’s nothing that abstract about any sport that a bit of research can’t cure.

But if you have no interest whatsoever, then make it a social experience, as getting together and rooting for the home team with a bunch of friends makes it an event. Allow yourself to get caught up in the excitement of the enthusiasm.

Find A Hobby
Find a hobby which will keep you occupied during the games. If you just can’t put your game face on, your alternative is spending some “me” time until the game is over. If you’re wanting to build a relationship, it’s all about compromise.

So find a hobby, do something that will easily motivate you, which will keep you busy while you’re sitting in the stands or on the sofa. Find peace with yourself while being aware of the nuances of the game, and you might even begin to enjoy it.

Understanding Core Fan Behavior
People love their hometown sports teams, this because it’s been embedded in them since childhood, passed down through generations. Others identify with their team as being more important than anything else in their lives, including themselves.

There’s an extremely deep emotional connection which permeates their sense of self. It’s not only just a team, but it becomes total devotion, a religion, an insatiable passion which makes humans insane, while the worries of the world melts away.

Don’t Obsess Or Become Jealous
Never put up an ultimatum, “It’s sports or me,” and then storm out the door. Recognize the roots of their fandom, and never consider that you’re second prize. You knew they were a sports fan when you first met them, right?

After the sporting event, you may of had plans, a romantic dinner, but the game goes into overtime, completely ruining the mood. If you insist that it’s dinner time, then you’ll only make yourself miserable, so always have alternate plans beforehand.

Even if emergencies arise, plan on a strategy ahead of time. Realize the obsession of watching sports is just as important as any other obligation. So the more you respect this, the more amicable the relationship will be.

Recognize The Emotional Swings
True sport fans will go through rapid emotional highs and lows with the wild swings of the game. If the team loses then they personally lose, so they can become irrational and grumpy, which can last for days.

Eventually, they’ll bounce back claiming that maybe next time they’ll win. Just allow them to vent, to rant until it’s out of their system. Never attempt to make them become a “non-fan” during this time, it won’t work. Give them the space to regain their senses.

Obsession Always Wins
The first question you should be asking on a first date is, “How big of a sports fan are you?” If their eyes suddenly light up, but you’re not a fan yourself, then it may be wise to scratch them off the list.

Otherwise, get prepared for your weekends during football season to be miserable and alone, as the sports fanatic will just ignore you while watching the game.