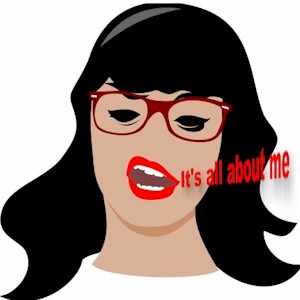 Me, myself and I, is the most important party of 3 that you know and attend. No one else matters. You’re wanting to join Narcissist’s Anonymous, but you’re afraid there’s others in the room who may think they’re more important than you.

To identify the narcissists among us, where to begin may be clarifying what one is. Are you able to sustain yourself in a steady and positive emotional state, and not suddenly get angry, experience bouts of depression, suddenly get anxiety attacks, and other forms of emotional distress.

Someone who’s functioning socially on par, and doesn’t have sociopath tenancies, can hear their own thoughts and concerns, and are also able to empathize by understanding the feelings of others. By now, you’re realizing that you are a narcissist.

What you avoid is what’s known as two-sided listening. Once a difference or an argument arises, those who are socially inept are unable to find a mutual win-win solution, this since they won’t listen to the concerns of the other party.

For instance, it’s nearing your bedtime and you’re getting tired, and begin thinking of going to sleep. You then suddenly get a phone call from a friend of yours regarding an issue of his, and needs your advice.

You may suggest that you both talk for a few minutes, now, and then resume the talk in the morning. This is a win-win solution.

But if you have narcissistic tenancies, you’d immediately respond with a quick “No, I don’t have time to talk.” You think, how dare he bother you now, “I’m tired and getting ready for bed,” you say to your friend’s request.

Similarly, if your friend happens to be a narcissist, the fact that they just don’t care about your time, talking at the moment is the only option to them.

So Know If You’re A Narcissist
Everyone to a certain degree is narcissistic, occasionally displaying strands of cockiness and being smug, but know how to keep it in check. There are some core definitions of narcissism, as there are varying degrees. The following will reveal how narcissistic you actually are.

You Never Listen
To you, what’s important is what “I” want, and nothing else matters, now got that? When you decide to mutually make decisions with someone regarding your needs or feelings, to you, it’s inconvenient and irrelevant.

This because when you discuss these issues, you know that what you think, your opinion, is always right. Anything and everyone else is wrong, or not important. If someone has any input, you feel they’re just undermining you.

So instead of listening so you can respond, narcissists will listen so they can either: dismiss, ignore, negate, denigrate, minimize, or completely render irrelevant what others are saying.

Me, Me, It’s Always About Me
I know better than you, I know more, I’m more popular and interesting. When I talk, or when we talk, it’s always about me. During any conversation, I get most or all of the attention because I know more.

If I want something, then I need to have it. It doesn’t matter how anyone else feels about it, because, I’m more important. I’m bigger, better, and richer than you, and you’re just here, just to do things for me.

Narcissistic people who are borderline sociopaths can also appear generous. It becomes difficult to trust these individuals who are sympathetic to your interests, as there’s always some hidden agenda to their motivation. The odds are good that they’re acting in a selfish manner that’s somehow responsive just to their concerns.

I Don’t Use The Same Rules
I can have affairs with anyone I like, cut into a long line up where others are waiting, and ignore all the rules which may get in the way of doing whatever I want. Those rules are made for others to follow, not me.

Narcissists will usually suffer from Short Man Syndrome. They suffer from some physical or mental deficit, but yet they view themselves as being above others, so the rules just don’t apply to them.

Don’t Criticize Me Because I Don’t Like It
If you want me to listen to and take your concerns seriously, I’ll get mad since any criticism hurts. I will constantly criticize others, and often do, but if you ever criticize me, then how dare you do so since it hurts my feelings, so I’ll just hurt you back.

Narcissists have an over inflated idea of their importance, and can be easily deflated and deterred by negative feedback. Also, since they think that everything revolves around them, they think that when others attempt to talk about any type of personal feelings, they see it as they criticizing them.

When Things Go Bad It’s Your Fault
I don’t apologize or never admit I’m wrong or to blame. This because I’m above you and beyond reproach. I’m never wrong. So don’t bother threatening me to say “I’m sorry,” or I need to contribute to solve a problem.

The unwillingness to take any type of responsibility for mistakes also goes hand in hand with quickly blaming others. If I’ve ever done anything that’s not right, then there must be a good reason for it.

It’s Your Fault If I Get Mad
It’s because of you that makes me angry. This because you didn’t listen to what I said. You criticized me again, or are trying to somehow control me. Your viewpoint is wrong. So what I expect is an apology right now, and you won’t get one from me.

Blaming others is your middle name, it’s never your fault ever. If things don’t go well, it’s not your fault since you’re perfect, it’s not your responsibility to fix the problem. I’m not responsible for me getting angry because if I do, it’s your fault.

Are You A Narcissist
Know that being narcissistic is usually developed by reactions becoming habits, and any habit can be changed or altered. And you should be able to change any of your habits, because your perfect, remember. You can do anything.

Knowing your narcissistic tendencies can usually empower you to notice and then fix the slippages. If there’s someone that you interact with who regularly shows narcissistic patterns, then just let them know.