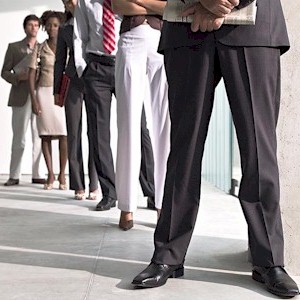 Unemployment is on the rise as jobs are being lost to technology. It’s more efficient, cheaper, never phones in sick and doesn’t complain. So what most, especially those entering the workforce needs to start thinking about is how they can be or become relevant in today’s shrinking micro economy job market.

Most however can’t grasp what that means. What job seekers now needs to understand is how to brand themselves effectively, managing their presence online. The new curve being using social media for effective job search.

In addition to these social media outlets being a platform for showcasing your talents, your individual expertise, these social media sites, particularly LinkedIn, Pinterest, Facebook, and even Twitter, are proving to be excellent resources when it comes to information on employment, finding a job and developing careers.

On the other end of the scale, the trend is that all the manual jobs are being phased out, those particularly who are in their 50’s and beyond who are now looking for employment, as their jobs has been lost to automation.

They also need to familiarize themselves with how they can effectively use social media to build or improve their personal brands, this to reinvent themselves and find new employment.

They need to view themselves much like how the major brands of business do, develop their own online presence, this when it comes to their perceptions, expertise, and experience.

The Social Generation Gap
There are a growing number of “middle-aged” job seekers who are woefully behind when it comes to embracing social media. What’s also common is those iconic brands, those Fortune 500 companies who are also behind the times as well.

The biggest challenge that needs to be understood is that these social media platforms are extremely easy effective tools, much like any other resource which allows us to connect and communicate better online.

The Shrinking Job Market
It’s found that the majority of job seekers, those fresh out of University are finding the blunt reality of the conditions of the current job market. What most don’t realize, and they don’t utilize, is that social media is the driving force for finding talent.

Some HR professionals are now strictly focusing on using platforms such as LinkedIn to find and qualify new potential employees. They’re focusing on better more efficient methods by using these tools which helps them find qualified people quicker. So it’s advised that you learn how to become more social savvy.

Social Media Is Here To Stay
What’s noticeable is that there’s a distinct divide between those who have learned and adopted how to utilized social media, and those who remain old school, and have convinced themselves that social media is just a fad.

Whatever you believe, know that social networking is completely airborne, and if you don’t bother getting on board, you’ll be left behind in ways which could possibly set you back behind the workforce. You need to participate or perish.

The Belief Of Social Media
There are some who are yet to adopt the concept, they think that social media is all about cat photos or posting selfies, and then publishing them on Facebook.

The idea remains foreign to them, as what’s not realized is that these platforms are capable of giving a company or an individual a competitive edge.

They do so by their ability to perform searches precisely, share, interact, and discover things in new ways, and this format of human interaction will never go away.

Social Media Is “Real Time”
What’s possible with social media today is that a customer can complain by tweeting about getting bad service from a company, instantly, in real time, and that same company can also fix the issue on the spot, if they choose to do so.

Otherwise, it could go viral and be immediately damaging, as others are able to read the tweet as soon as it’s tweeted. So it’s in the best interest of the company to attend to this and keep the customer happy.

What’s also been capitalized on is savvy online marketers who are taking advantage of all the innovative methods of precisely meeting and then exceeding market demand.

What the majority of people fail to understand is the power that social media has. It’s estimated that there are less that 25% percent of those who are 45 and older, who don’t use social media correctly.

These are the individuals who’s jobs may of been lost because of technology, and fail to understand that it’s social media. They need to learn how to use it to find their next job.

Using Social Media Networking Effectively
Every career coach will tell you that it’s networking that’s still necessary when searching for a new job, which has become a critical skill.

So you need to learn how to use social media wisely and effectively, as it’s an excellent networking tool, which gets you known and your foot in the door. It can do all the spade work for a face to face interview.

So get into the habit of updating or refining all of your outgoing social based branding, such as your text messages, emails, and posts before sending them out.

Try reading your messages from the receivers point of view and perspective. How would it be interpreted, how can the message be made more clear or precise.

Be Polite Stay In Touch
What social media does is it makes operations easier, it refines the process. But remaining polite and courteous is still important. Continue to send out emails and thank you notes directly after an interview.

Offer to be of service, that you’re looking forward to your next meeting. Always remain judicious, but never overdo it.