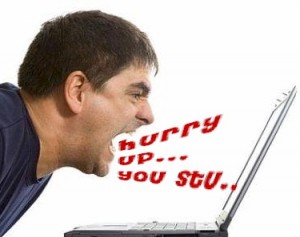 Speed and efficiency for your computer or laptop is the essential key for making sure that you’re able keep all of your office productivity as effective as possible. This can also be important since you’re wanting to run all of your resident software programs and applications at top notch performance.

But as you know, there are usually a host of factors which can potentially affect your desktop computer’s performance, slowing it down and making it a lot more difficult as well as more time-consuming to be able to complete even the easiest tasks.

There are fortunately a few ways on how you can either increase the speed of your computer or remove the restrictive barriers which is preventing it from performing to its intended optimum potential.

So here are a few tips which you can immediately use to help your Slow Computer run a lot quicker.

[ad#co-1]
Cleaning Out Your PC’s Hard Drive
In a few cases, a slow poorly performing computer while your booting up or just doing simple desktop tasks may be the result of your hard drive being too full. Computers will use the on-board memory known as RAM to operate the software and the apps along with using portions of the hard drive.

So if you happen to be running out of hard drive space, then your computer obviously won’t have the access to these additional resources contributing to a noticeable decrease in performance and speed. So the easiest method to free up space is finding all of the unwanted or unused documents and files which you can delete. You can also delete entire software programs, provided that you do it properly, if your business or company doesn’t use them any longer.

Microsoft Windows also has a built-in maintenance feature which is called “Disk Cleanup,” which can assist you in finding unused, non-essential or out dated files which you can delete.

On MS Windows 7, go to the “Start” menu on the bottom right and then click on “All Programs,” then “Accessories,” then “System Tools,” and finally “Disk Cleanup.”

Performing this process will instantly let you know exactly how much disk space that you’re able to free up. It also gives you the option to show you which files that it wants to delete, so that you won’t be automatically deleting any important files that you want to keep.

When you’re relatively new computer or laptop begins to run slower, you should also be checking to see if there’s any additional programs which are constantly running in the background.

Some applications will automatically open and begin running in the background as soon as you turn on or reboot your computer. So preventing these unnecessary programs from doing so should speed up your computers speed.

Scanning Your Computer For Viruses
Some of those programs which are running in the background without you knowing could potentially be a virus. The majority of the these malicious applications will appear to be absolutely legitimate programs and most will mask themselves so you may not initially recognize them. Spyware, Malware, and other related viruses can significantly slow down your computer’s speed as well as obviously posing as a security threat.

It’s recommended that you install an effective self updating antivirus program which will scan your computer for viruses. There are a variety of programs that are available, some which are free to download.

For example, there is a free version of Malwarebytes, found at www.malwarebytes.org, which has a virus database that’s regularly updated. It can run in simple mode as well as do in-depth scans which can effectively search through some or all of your computer files.

The app is then able to quarantine or completely remove the latest malicious applications that it finds. There’s also an upgraded PRO version offered by Malwarebytes which has a host of additional advanced features. This is an excellent alternative for constantly running scans on your various individual computers.

There’s also an option for small or larger businesses to be able to directly contact Malwarebytes to set up a corporate licensing agreement, which includes the proper installation of the program on all of the computers as well as a network.

Tools To Help You Increase Computer Speed
If you’ve followed the steps by cleaning out your hard drive as well as scanning it for viruses such as malware, but it’s still continuing to perform poorly and isn’t as quick as you’d like it to be, then there are other options you could take.

There are a few free tools that you can use which may help speed things up. One such tool is Window’s ReadyBoost by Microsoft, which effectively uses any available memory from your flash drive or your memory card to increase the PC’s speed, provided that you’re using Windows Vista or Windows 7 on your computer.

What you’ll need is a flash drive or a memory card which has a minimum of 1GB of free space to be dedicated towards ReadyBoost. Once you connect them to your PC, ReadyBoost will use that memory to run the software or app. Some of these memory devices will now even indicate on their packaging if they’re compatible with ReadyBoost or not.

Upgrading Or Updating Your Computer’s Operating Systems
This may be something that you may not even think of when you first notice that your computer is beginning to run slower. And that’s whether if your current computers operating system as well as all the software and applications are up-to-date or not.

Software companies will usually release updates on a regular basis for their various products, as will the operating systems provide downloadable service packs as well. These upgrades can immediately improve your PC’s performance as well as allowing its resources to run a lot more efficiently.

There may be certain situations where updates won’t be able to help since your current operating system may be simply too outdated. If you happen to use all of the latest and greatest software and apps but you’ve been using the same exact Operating System for a few years, then it may be time for an OS upgrade.

This is always an economical alternative to replacing entire computer systems. All you’re required to know is if the current hardware is capable of running and supporting the software as well as the apps which your using.

Evaluating The Hardware On Your Computer
If you’ve exhausted every possible option and your computer is still slow, then the reason for the poor speed issues may potentially be hardware related.

All of the software titles will show the minimum as well as the recommended system requirements which your computer needs for it to run properly. If the specs on your computer don’t match up, then it may be necessary to upgrade some components.

It may just come down to your computer needing additional RAM, a newer graphics card, or any other hardware component, especially if your computer is a few years old.

If your computer happens to be older than five years, most likely, it isn’t compatible with some of the components or the newer additions may not be enough to increase its performance.

Also keep in mind that when it comes to laptops, it’s not always easy or even possible at times to upgrade them. So in that case, it may just be time to invest in a newer system which has the latest hardware, software, and Operating System. At times, this may be the best possible solution.