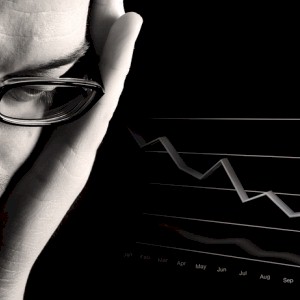 To begin with, most who attempt to trade for a living lose. The perceived easy street to riches isn’t paved with coin, but rather with dirt. It’s also known that the main reason why most traders lose is because they’re not psychologically prepared to trade real money.

What happens is they get blinded by emotion when trading with real capital, emotions which they didn’t experience while paper trading. Trading is more of a psychological game than a methodological process.

Successfully making money trading the financial markets is reserved only for the traders who’s adopted this mindset, which gives them a better chance of surviving the vicious waters of financial instrument speculation.

Without knowing, using, or understanding trading psychology along with the issues which circumvents the trading method, there’s then no chance of overcoming the panic, confusion, fear, or despair, which are inherent when trading with real money.

Ultimately, after a series of consecutive losses, the trading system becomes replaced with a feeling that it’s doomed, impossible to make money, that the individual making the trades is a failure. For this reason alone, trading psychology becomes more critical than the trading method itself.

The Common Scenario Of The New Trader
A trader has developed a successful day trading method for an index future. This method delivers 3 to 5 successful trade signals per day, and the trader has perfected it while paper trading to win 81% percent of the time, this for a profitable daily gain.

The trader achieves these results for 3 consecutive months, and the paper trading objectives are being met, and feels that it’s time to begin trading with real capital.

Once the trading with real money begins, emotions set in and things quickly go bad. The trader begins to skip some buy/sell trade signals, this in the attempts to just pick what looks like winners.

What then invariably happens is that there’s more losing trades than winners which are picked. Attempting to correct this, more panic sets in and the trades are then entered either too early or too late and the losses escalate.

“What’s wrong with me, why am losing so much? Maybe I’m not cut out to be a trader, maybe the system doesn’t work.”

The emotions begin accelerating with each losing trade, the trading account begins to dwindle, the trader gets discouraged and quits. The trader now thinks that the paper trading results won’t transfer to real money trading, and goes back paper trading again.

The trader had a proven trading system, but didn’t have a good trading psychology plan. There was no set plan to transition from paper trading with no risk, to the fear which is losing real money in a trade.

There’s nothing wrong with the trading plan, but the trader hasn’t traded it properly to know this. The trader will take the loss personally, and not blame the actual execution of the trade itself as being the loser.

Developing A Psychological Trading Plan
• Accept that losing trades are a normal part of trading, and that it’s impossible to win every trade. The objective should be to become a profitable trader
• Replace the emotion of either winning and losing with following the trading system properly. Trade the same way you would when paper trading. Think of proper execution, the process, rather than how much a potential trade could lose
• Remain non-judgmental and neutral. To become profitable, doing so becomes mandatory. There’s no way you’re going to trust yourself to manage risk if you’re too cautious or tell yourself that you’re going to lose every time that you do something wrong
• Eliminating your emotions entirely isn’t the objective or is it possible. Emotions will always be a part of trading, so what needs to be learned is channeling it properly
• Start slow when trading with real money. Trade small, such as risking just 2% percent of your capital at one time. Track and analyze what you’ve done, and always asking yourself: Did I follow my plan, did I execute the system properly?

Paper Trading vs Real Money
You should never approximate or expect your paper trading results to be the same when trading with real money. But what doing so should solidify and help you shift your focus to how much money you can make, if the trading plan is executed properly once you follow your plan.

Paper trading also allows you to get acclimatized with all of the logistics of real-time, real money trading execution and its nuances. You’ll experience all the initial emotions that’s related with trading, the only difference being that the market moves considerably faster.

It helps you to discipline yourself to trade the platform so you won’t get overwhelmed by the process, while allowing you to do what you’re intending to do, this once the fear and all the other emotions kick in.

So you have a proven trading method and a trading plan, and you’ve successfully profited while paper trading. You think that you’re ready to begin trading real money.

This is when it becomes extremely important to have a proper trading psychology plan in place that’s just as good, or better than your trading plan, and realizing that neither will work without the other.