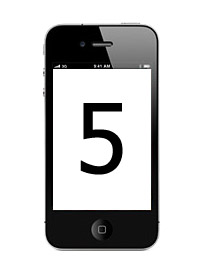 Apple went out and completely revolutionized a newer and better electronic “mousetrap” by developing the mobile smartphone. They constructed an interactive mobile phone which was able to connect to the internet among other usable functions. They practically invented a brand new segment of mobility when they introduced the iPhone. So the latest and greatest Apple iPhone 5 should be no different. You know that you’re doing something right when the industry that you’ve created develops a handful of “copy-cats,” who are cutting into your overall market share by competitors such as the Android OS Smartphones, the Blackberry and the Microsoft Windows Phone 7.

They are all worthy challengers but there is absolutely no doubt who continuously sets the benchmark. So the upcoming new version of the Apple iPhone 5 has the opportunity to set the bar even higher once again. They should be able to leave their competition in the rear view mirror when the iPhone 5 is formally released.

Apples iOS 5 Operating System
Apple has recently shared with the world the specific details of their new iOS 5. This iOS5 will free the iPhone as well as the iPad away from the PC. It will be able to sync as well as update wirelessly instead of using any type of physical connection such as using an USB port.

There are also improvements as well as new features in the iOS5 mail client. There’s the addition of iMessage, tabbed browsing in the Safari browser, and the improved behavior of their Notification Center, which all contributes to the success and functionality of the new iPhone 5.

Apple iCloud Computing
Along with the new and improved iOS 5, Apple is expected to officially introduce and launch their iCloud project around the same time that the iPhone5 is expected to be introduced.

The new iCloud service will be able to enable effortless as well as seamless syncing of email, music, file transfers, calenders, personal contacts, along with other content directly between the iCloud and the iPhone, the iPad, Mac PCs, laptops and even with Windows PCs.

The iPhone 5 Specifications
There are persistent rumors that the new Apple iPhone 5 is expected to be housed with the exact same dual-core A5 processor which is used in the iPad 2.

This dual-core processor however is just matching the “status-quo,” rather than offering a significant upgrade to blow the other rival smartphones away. But keep in mind that Apple consistently manages to squeeze out much better performance as well as a superior user experience out of equivalent, or even inferior hardware of the other similar smartphones on the market.

iPhone 5’s Improved Digital Camera
The mobile smartphone is quickly beginning to replace the digital “Point and Shoot” type digital camera, or for that matter, anything else that’s portable and convenient that’s emerging as the digital camera of choice that’s used by consumers.

The built-in camera on the majority of smartphones has already put the once popular “Flip Video Cameras” out to pasture. But there’s a lot more to taking digital photos than maxing out the available megapixels. The majority of the digital cameras on the current smartphones seems more like an add-on feature and as a result, usually produces poor quality photos.

There is speculation however which suggests that the new iPhone 5 will be equipped with a quality 8 megapixel camera along with a built-in dual-LED flash, which provides for much better low-light photos. The iPhone 5 camera is expected to raise the bar for digital camera quality for smartphone photos.

iPhone 5 Mobile Carriers (United States)
The Apple iPhone 5 is expected to be the very first iPhone model which is introduced without the exclusivity contract with AT&T in the United States. Although Verizon has offered the iPhone 4 and thus has been available as well as been successful, there has been a lot of Verizon customers who has decided to hold off knowing that there was a new iPhone 5 just around the corner. These mobile users did not want to be locked down in a lengthy contract with an iPhone 4. The new unlocked Apple iPhones which will be available will make a huge difference as well.

Also, by the time that the iPhone 5 is expected to be launched, both of the major carriers in the US should have their 4G LTE networks running. Verizon along with AT&T will be the ones offering the new iPhone 5 and most likely will be available on their 4G networks. If true, then the iPhone 5 should have an average data rate of around 12 megabits per sec. downlink as well as a 5 megabits per sec. uplink.

Although some of this may be based on very well leaked speculation, as the exact digital camera functionality or the hardware specifications are not really known. But, the new features which are already known for the new iPhone 5 are are enough to make this new smartphone the must have mobile device and will once again should leave all of the other smartphones playing catch-up once again.