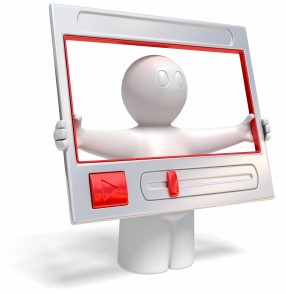 Google’s YouTube, the largest online video sharing provider has had this end game for a while, which is to offer premium video content for it’s online viewers. Offering high quality, state of the art premium content on YouTube only makes too much sense. It’s just a matter of bringing ‘Big Picture’ video available at the theater or on TV, to the YouTube screen on your computer, and this as inexpensively as possible.

So YouTube has apparently been having discussions with some of the largest agents and producers in Hollywood, as well as with the better known web video producers to push this forward. These talks involve the production companies willing to commit to producing entertainment channels for YouTube consumption, with an agreed upon certain number of web based episodes over a set period of time.

Better For Web Video Producers
This is obviously an advantage to web video producers as the production of web video costs pales in comparison to producing video for TV or theater. So YouTube would be broadcasting say the entire premiere of a brand new show on an exclusive channel. The production investment for YouTube would be recouped by Google’s revenue sharing of its ad sales.

YouTube however has stated that these talks are just exploratory at this point, as no deals has been completed as of yet, and this idea is just one of many to help web content developers to bring their videos to the Web. YouTube is however moving towards attracting well known and popular experienced high quality web video content creators, to entice current advertisers on spending more of their online video advertising budgets.

So the real question may be how they can provide the initial cash flow to these Web video producers who are willing to commit building channels for their material on YouTube, without not actually paying for the video content itself. How do you find and convince these producers to create quality programming on the YouTube platform, before driving for a better user experience thus attracting more ad revenue.

What Google Does Best
What Google does best is they are able to build ‘platforms,’ as well as keeping in order a search system to organize and prioritize the Web’s information with their algorithm. What Google is discovering is that web video on YouTube is a lot different from their search engine and display results, specifically when it comes to getting better premium video content, where advertisers will be willing to pay higher premium rates.

While YouTube is making their rounds around Hollywood, they are also becoming a lot more active in attracting the most popular independent and well known web video producers, who has been the largest source for these premium videos. They have been even advancing initial start-up funds to these producers against future potential ad revenue, as well as offering merchandise such as rebates for professional digital camera equipment.

Attracting quality web video producers are set to be YouTube’s backbone, as the content that’s produced are continuously becoming better in quality. There are excellent video producers out there who has partnered with YouTube, who’s skill of production has attracted massive audiences on YouTube, as well as on their own personal video blogs. These web videos are professional and entertaining, and the majority still do it for creativity sake, and not for money or to promote merchandise.

[ad#co-1]
YouTube’s New Video Industry
There has been an entire industry of web video producers that did not even exist before YouTube, and the majority would not survive without it. They will also be YouTube’s largest source when it comes to they eventually offering ‘premium videos’ that YouTube eventually plans to sell to advertisers.

YouTube’s goal is finding yet more talented web video producers and then helping them promote their work. According to YouTube, there are already hundreds of these independent professional video producers who are making well over six figures from their work. So give Google credit for basically inventing yet another entire new industry where anyone with a camera and a talented vision can create videos, build themselves a sizable audience and make a comfortable income off the Internet.

YouTube maintains there is no concrete strategy to bringing better higher quality video content on YouTube, but they are rather trying out a lot of different approaches to widen and attract talented web video creators who are or wanting to earn a living on the popular platform.

Keeping Your Internet Computer Security In The Clouds