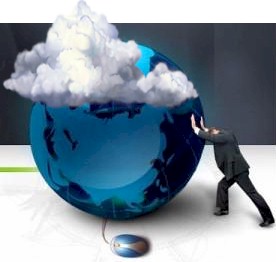 Cloud computing and it’s related services are continuously altering the landscape when it comes to network security. These cloud based services claim that your data is completely secure from any viral attacks.

But if you do a search for the latest Internet Security solutions on the Web, there’s still a large variety of well known antivirus software programs which are available on the market. They all claim to provide top notch “Iron Clad” protection for all of your computer related security needs.

This online protection is required to guard against all of the different variants of all the nasty crude infections which are out there, and they seem to grow and mutate on a daily basis.

In the past, any of these antivirus programs were extremely effective as well as they being the “standard,” when it came to the protection all of your electronic devices against these viral threats.

Cloud Computing Security
So fast forward to today, especially in the enterprise sector, where there’s a constant migration of individuals, as well as companies, who are increasingly switching to cloud based computing. They do so primarily for convenience and cost savings.

What’s recommended by the security experts is that once you’re on the cloud, you should clamp down all of your daily online activities, such as guarding your, virtual ID’s, web browsing activity, usernames and passwords, and where and how you store your business and personal data.

Taking all of these precautions has become a lot more important than in the past. All that was previously required was just password protecting or physically locking down your personal desktop computer.

Once you add the nomad portability of the mobile devices, such as the smartphones and tablet PC, which are generally pretty secure by default, they also need to be secured because of the increased online activity and interaction by using services such as Wi-Fi.

So the question for many is if a traditional antivirus software program is still necessary for securing their hardware. Are they now obsolete if on the cloud, and are there any alternate solutions?

Security For Cloud Computing
The majority are adopting the idea of securing down both their devices and their online browsing activities. The general consensus being use a good antivirus program for their desktops and their mobile devices.

When it comes to businesses, what’s recommended is using a VPN (Virtual private network) to protect against any online threats which may be lurking to protect their footprint and data.

The question then becomes, is there really a need for additional antivirus programs if you already use a VPN, which by default secures and locks down all of your web browsing activities, such as, the sites that you visit, the passwords, and the personal privacy activities while using a cloud service.

Since the main purpose for this security is to fight off all of the various online attacks and viruses, then is there a way that these viruses can even reach the hardware devices to infect them, as the cloud security measures should protect them.

In the past, these viruses assaulted the standalone or network computers by infected thumb drives, or floppy disks. Now, the majority of the viruses attacks are contracted through the Web, or by infected email.

But since your web activity and your email exchanges are protected by the cloud security protocols which they need to pass through, it’s now highly unlikely that any of these viruses will ever reach your physical device. So because of this, is there even a need for third-party antivirus software.

Going Beyond IT Devices
There’s currently a movement by both consumers and businesses who are now entrusting the majority of their highly confidential data to be cloud based. If you think you’re not, you most likely are. If you use GMail or Hotmail for instance, then your relying on cloud computing.

So in theory, the direct threats to your physical devices at home or in the office should become less relevant, especially when it comes to the threat of viruses compromising your personal identity and personal data.

But then, there are the constant news headlines where these massive “hack” attacks are occurring to the mainstays of the Web, such as Google and GoDaddy. The result is stolen data along with compromised security which you would think should be completely secure.

It’s not the hardware of these large companies which are being attacked, but rather the hackers are finding “holes” in their security systems, which makes them vulnerable. So because of this, identity theft has affected over 11 million North Americans just last year alone.

Cloudy Yet Secure
Some recommend that you can just rely on these cloud security measures which are supposedly “Iron Clad” to protect all of your Web data, rather than the need to protect your devices, which then greatly diminishes the role of these antivirus programs.

These security programs and apps which are available, encrypts the web pages visited, and they enable the user to remain completely anonymous while browsing the Internet.

A Hybrid Security Solution
So because of the cloud movement, the safe thinking is that there needs to be a way not only to secure the devices, but to also protect the online browsing and interaction as well.

As a result, it’s not encouraged nor is it recommended that individuals and businesses completely scrap their antivirus protection solutions for their hardware. It’s also becoming necessary that users pay a lot more attention to personally securing all of their online activities as well.

What doing so does is it eliminates the majority of the threats which the antivirus programs attempt to solve, this so they won’t compromise your computer. This is comparable to a highway patrol car which is stationed and guards the highways, which protects the perimeter of your city and neighborhood.

So by protecting your business and personal data using a dual pronged approach, first by using the security measures set out in the cloud service, which should make it safe, and also by using an anti-virus program for all of your personal devices, will keep the viral threats out of reach.