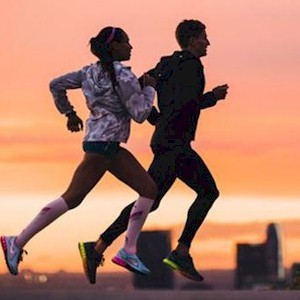 First you walk, then you jog, which turns into active voluntary running. Our bodies are naturally align to run, this because of the classic “fight or flight” response, where most will choose to run in the opposite direction, rather than oppose.

Active modern day running is one of the most effective ways of staying fit, provided that it’s done correctly. This where the myths and the truths come in. What’s for certain is that dedicated running will help you lose weight, make you healthier and feel happier, this once the endorphins kick in.

There are plenty of misconceptions which are associated with the act of recreational running, ranging anywhere from it’s extremely boring, to that your knees and hip joints take an absolute beating.

So what’s revealed and challenged are the biggest myths regarding this fitness activity, giving you more reason to join forces and become an active runner.

Running Damages My Knees And Hips
What’s known for certain is that your entire body, including all of your joints, specifically the knees and hips, does is they take an extreme pounding with every step you take.

What all of the clinical studies show however, is that running also strengthens the muscles around the hips, knees, and the ankle joints, while improving bone health.

Running experts claim that it’s not that bad for you, as we’re all physically aligned to run. To prevent injury, this especially to the knees and the associated joints, of if you’re novice, is to get a proper pair of running shoes.

Breathable clothing and well fitting shoes are the best investments that you can make. If you’re not sure which joggers to select, then head to your local running specialty store for a gait analysis. They’ll be able to match the exact shoe for your foot and body type.

Then ease yourself into running by alternating between walking and jogging, gradually decreasing the walking. This way, you won’t completely shock your body, giving it time to adjust and recover before you really begin to pound the pavement.

I’ll Lose Massive Weight
Although running is one of the most affordable and refreshing methods of getting fit, what you won’t immediately lose are any noticeable amounts of weight.

The reasons for this varies, anywhere from how dedicated you are to running, how you approach it, such as if you have long slow runs which keeps your metabolism rate static, to high intensity runs, which burns off more calories but you’ll eat more.

The easiest way of gauging your running is by just simply weighing yourself. Scales don’t lie, but they also can’t differentiate between muscle or fat, water retention, or the clothes that you’re wearing.

So it comes down to how good you feel and what your diet is. If you find you have more energy, feel less pain, notice that your skin feels tighter and your clothes fit looser, then you know that running is working for you.

All I Need To Do Is Run
Life would be so much easier if all you need is to put on your running shoes, head out the door, and then you’ll magically be transformed into a sleek fitness god.

Although running consistently has proven to be an excellent whole body workout, which works out the lungs and heart, while toning up and strengthening the muscles, it’s not a complete solution when it comes to your overall fitness.

What’s also required are a compliment of other forms of exercising, specifically cross-training, such as cycling, swimming, yoga, or pilates. To get the best overall results for your fitness, what’s recommended is combining the other forms of training, which are:

What doing various cross-training activities on your off days does is they’ll target these areas. Cross-training also helps in preventing injuries while injecting variety, which breaks away from strictly running.

So it’s recommended that you supplement your running with a variety of these exercises, the end result being that you’ll be a stronger runner because of it.

I’m Too Old I’m Too Overweight To Start Running
Anyone who wants to, can choose to dedicate themselves to become an active runner. The proof is your local 10K run, where you’ll see a variety of people, all shapes and sizes of all ages, running by.

These runs attract all types of runners, anywhere from seniors to the overweight. There are accounts of individuals who’ll take up marathon running well into their 80’s, this for the first time.

There are runners that you see on a daily basis in the hot scorching sun, when it’s pouring rain, or running through the snow. They have no excuses, just reasons to run.

Just Choose To Start
To begin, it can at times be intimidating, as some feel they’re on display for public ridicule by running down the streets, pestered by those who are sedentary, or dogs who feel threatened.

What’s also common, especially when it comes to adults, although they know it’s a completely doable act for them to start running, is they don’t feel they have the “ideal” runner’s body, so they hesitate.

It’s a community, it’s a club that you join, one that does cost that much or needs a membership, so just put on your shoes and head out the door.