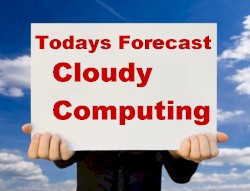 So if you’ve been following tech issues for a while, then you undoubtedly know all about the Cloud Computing movement. You may even be planing on jumping on board yourself and participating sometime soon.

It’s becoming such a trendy topic that, if you’re not planning on clouding, then your tech life may be considered irrelevant and not really that cool.

You know, that’s because everyone’s getting their heads in the cloud. Cloud computing is that virtual infinite repository of all things digital where data is stored on those humongous secure servers that’s floating around somewhere in cyberspace.

Well, just wait a second. Not that everything that’s referred to Cloud Computing is hyperbole, but the cloud is not necessarily needed by all businesses or individuals. There are some which don’t need to own or operate their own infrastructure.

For the majority of consumers, cloud computing can be viewed as a viable choice to adopt because of the useful functions that it offers, and their usually free to use. But, even then, it’s not exactly an absolute necessity.

[ad#co-1]
Is Cloud Computing The Final Answer
Cloud computing in fact has a few downsides which you should be aware of. So listed are some suggestions as well as recommendations which you need to know before proceeding. There’s also a few tips as well as advantages on why the cloud actually makes sense.

One of the most obvious “elephants in the room” is that these vendors of Cloud Computing are wanting to lock you in as “long-term” clients for their various products or services.

Unlike say a company who markets “laundry soap” for instance, who are obviously wanting to keep you using their particular brand for as long as possible, but they have no way of forcing you to stay loyal to their product.

On the other hand, all of these dominant tech vendors have a virtual “stick” to beat you with to make you stay. It’s a well known issue which permeates the very fundamental nature of cloud computing, so you need to be aware.

The Problems Of Working Offline
To be able to understand that virtual “stick” concept, think when you happen to be working offline on a project, which happens to be one of the biggest downsides of cloud computing.

If you don’t happen to have an active live Internet connection, then you have no way of accessing the cloud service where all of your files are stored. This makes your computer practically useless as well as paralyzed. You won’t be able to read, send or receive email, nor compose, edit or retrieve any documents or access data files etc.

What Google has is an app which allows you to “look” at their various services such as Google Docs or Google Calendar while your offline, but you’re not able to actually change or edit them, so what good is that.

This may not be a problem just viewing Calendar, but can be an issue with Google Docs. Also, these limited capabilities while offline are available just for the users of Google Chrome, their dedicated Internet browser and no one else. So if you currently use Firefox or Internet Explorer, then you’re out of luck.

Eventually, at some point in time, Google plans to introduce full offline editing. When it does, you’ll still be facing the “lock-in” problem since Google Docs is still the only service that will work.

When Google Docs is up and running, currently, they just can’t compete “horsepower” wise with the free services which are offered by Open Office or Microsoft Office. Both of these suites are also loaded with a lot of additional features, some which you’ll never know about or bother using.

It’s also nice to have all of those extra features available to you, if and when you need them. And don’t you want to be the one who decides exactly which features that you’d like to add to your documents, rather than letting Google decide.

Sometimes The Power Just Goes Out
There’s an issue completely out of your hands which can also affect you when you’re working offline as well, and that’s power outages. If the hydro-electric power in your home, office or building, or if the entire neighborhood power grid goes out for any extended time, then that can be a serious problem which you have no control over.

And since Google doesn’t currently offer any support for their various free apps, all you’re left with is that you hope everything goes back online soon, before it causes any significant damage.

So what you end up telling your boss is that you can’t do your work because Google Docs happens to be down. This is similar to the… ” my dog ate my homework” excuse.

Power outages as you know can and does happen. Even Google as well as Microsoft themselves were recently hit by power outages on their cloud services. Google Docs went completely dark for a while. Microsoft and their suite of cloud products such as: Office 365, Hotmail and SkyDrive were knocked out for several hours as well.

Almost every cloud related service has had similar types of failures in the past. But that’s not saying that they’re completely unreliable. If you happen to rely strictly on the cloud, you should be assuming that sometime in the future, that there may be some type of power outage leaving you helpless.

How Secure Is The Cloud… Really
When your personal or business data is completely out of your hands, there’s a lot more to worry about than just the occasional power outage. Privacy as well as security are important issues which you should be aware of.

Hacking is becoming a lot more prominent than ever for career online criminals, and even the high profile and responsible companies are now suffering attacks and inadvertent data leaks.

So what about all those new and untested cloud computing vendors which are popping up on a regular basis. They most likely don’t have a 100% percent “Iron Clad” security plan into place.

Issues Of Cloud Computing
So are there any situations when cloud computing is good for consumers? Well, sure there is. There are now numerous users who are actually doing all of their data backups in the cloud. And because of the massive amounts of data that we accumulate these days, it makes perfect sense to do so.

But because of the potential security issues however, it’s advised that you examine the cloud vendors security protocols as well as reading the various ratings and reviews from trustworthy sites on their reliability.

You also need to be concerned about potential vendors who suddenly goes out of business, leaving you completely stranded, which can be a risk similar to having your computers hard drive completely fail, lost or stolen.

Collaboration can be an advantage in the cloud. There are now numerous sites, mostly for free or extremely inexpensive, which makes it easy for “work groups” to be able to share as well as edit documents and other material as well. This makes it extremely easy to share with others.