Recognizing The Fears Which Are Holding Back Your Success 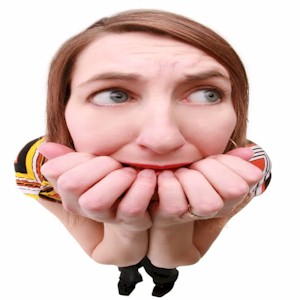 Fear is the common denominator, it paralyzes the soul while killing ambition, keeping the most promising of individuals from ultimately realizing their life destiny.

There are steps that you can take once you know what these fears are. When you activate a workable plan of action on eliminating fear, it clears the roadblocks which exposes your true potential. The first step is admitting that you have certain fears that you need to overcome.

Certain elements of fear, however, aren’t always a bad thing and can actually motivate you. It does become a perfectly natural and normal exercise to feel hesitant when it comes to doing something completely new or different.

But once you feel that fear is beginning to hold you back, and it becomes paralyzing, slowing down your progression, that’s when you need to correct it.

Fear keeps the most brilliant of ideas from turning into action and fruition. This places too many promising individuals, such as business owners and entrepreneurs, from realizing their true ultimate dream of making a difference.

So once you’re held back because you’re not able to cross this barrier, where you’re constantly finding yourself on the wrong side of the “loser” stat, then you’ll need to realize and confront your fears, and begin eliminating them by taking action.

It’s also important to know that the most successful people in this world, the strongest, and the bravest, all experience or have experienced varying degrees of fear in their lives, just like you have. The difference is they’ve learned how to manage them by recognizing the warning flags and then moving past beyond them.

The Need To Experience Fear And Failure
How did these successful individuals manage to learn this valuable quality of diminishing their fears. They did so by experiencing failure! Failure, and going beyond it is a vital steppingstone to achieving success on the other side. Without these failures presenting themselves, there’s nothing to learn or improve from.

So it becomes important to identify and then neutralize your biggest fears. Once that these various roadblocks are out of the way, then you can begin developing a master plan and then begin to take control and action without barriers. There are a few basic fears and beliefs which hold back the majority of individuals. The following are the fears which are the most common.

The Fear Of Being Judged By Others
One common fear is you worrying about what others will think of you. This especially if you’ve failed in your latest venture or job. If you hang around long enough with the right crowd, these are the individuals who will stick with you, adore you, and think that you’re a star, regardless if you’ve happened to of succeeded or failed. You need to find that crowd.

The majority of people don’t have the strength or the stamina to act on their dreams. You may even be the only person in your group who’s ever had the courage to be able to make a stand or step out.

Others will admire you for that quality alone, while secretly wishing that they possessed the same drive and strength. The biggest reality is that there’s really no such thing as this thing called failure, especially if you persevere.

Once you get knocked down, then get right back up again. These setbacks are only opportunities for you to learn, grow, and then try harder and smarter the next time.

The Fear Of Losing Faith And Hope
Your very inaction and paralysis may be frustrating as well as disappointing to you and others. But as long as you keep that faith, the hope that you’ll someday get past your fears, then you’ll finally be able to activate your dreams. Once you do so, and they actually come to life, then you’ll feel safer as well as a lot more optimistic about the future.

But instead, you’d rather keep your ideas and dreams of success tucked firmly, safe and secure in the recesses of your mind. This way, there’s no chance that you can fail. This because you realize that if you do fail, then all hope is then gone, and that thought is even more frightening.

But think how much that’s holding you back. If you don’t explore every promise of a fulfilling successful future, and if that’s eliminated you from activating your ideas list, or if your concept fails, then is that the end of your life and dreams? No.

If that one idea fails, then there will be another idea, another method, or another way of doing things. So what you need to do is release your great ideas and hopes from your mind, activate them, and then allow your creativity to flow out. Gather all the information from all of your mistakes and missteps, and then your hopes will eventually grow into success.

The Fear Of Not Being Able To Perform Or Keep Up
If you’ve ever tried anything in your life, and consistently failed, then the next time you try, you begin making excuses why you can’t achieve that goal. You begin making excuses such as: you’re getting too old, you’re not talented enough, or that you’re doomed to fail again.

These are just excuses, artificial barriers that you’ve placed on yourself because of the fear of success, or the fear of money. You’ve created a self limiting belief on yourself that you can’t do it.

You’ve placed all this pressure on yourself, and this limiting behavior, and you allow your friends and family to let you know about it. So you need to find a way to get past these self-imposed limitations, and see beyond the fence.

You have to believe that you can handle your own success, that you can vision it. This happens once you allow yourself to let go of all your fears, and your doubts, the fears that you only know and can recognize.

Fearful Of Fear Itself
At times, just recognizing and facing these fear head-on is enough, while some other bigger fears may need help from external sources, even professional help. The first step is identifying these self imposed road blocks, which can be more daunting than the failure itself.

Usually, these fears are based on completely false beliefs and not true reality. So try placing that fear into better perspective by simply asking yourself, “Can this, in reality, really happen to me, or do I just fear that it will?” Then begin testing the waters, going one step at a time.

What Colors Mean And How They Influence Your Decisions