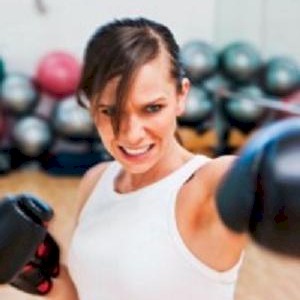 That’s the connection and it can be that easy, and that’s once you begin to feel stress or anxious, just exercise your body. Make yourself active, which is guaranteed to calm you down when under pressure or compromised.

It’s a natural reaction for the body to move, this once it feels stress. That’s how we’re build, and how our human predecessors reacted to danger. When under attack, once our ancestors felt a pertinent threat, the natural instinct was to move, which is known as the “fight or flight” response.

What the body did was stand up and fight or run the opposite way, and the primitive brain still reacts to this “fight or flight” response.

This is the same feeling as downing a few energy drinks, as the adrenaline surges through the blood vessels. What adrenaline gives you is a natural caffeine like boost of energy.

Meanwhile, the stress hormone cortisol also simultaneously reacts as well, this by turning the body’s storage of sugar in the liver and muscles also into energy, giving you the will to run or fight.

Lets Get Physical
The physical act of running away or staying and fighting burns off that adrenaline and the cortisol release, which instantly reduces the anxiety buildup, making us feel less threatened and relaxed.

Unfortunately, the majority of the time in this modern day, we don’t get to burn off this stress that we feel by getting physically active, so the adrenaline and cortisol just stews.

For instance, you’re sitting in traffic and getting upset because you’re late for work. The flight response tempts you to jump out of your car and run to work, but you can’t do that, so you just sit there and fume.

Similarly, you’re in a meeting, and you become upset about the text you just received, but you need to remain calm and show composure, this while the adrenaline and sugar is racing through your veins.

Once this adrenaline and cortisol release begins to build up in the body, and you don’t burn it off, the end result are panic attacks, anxiety, and high blood pressure.

Exercising To The Rescue
That’s why we need to inject physical activity such as artificial exercising, this because we just can’t get up during a meeting, and punch someone in the face to release the stress.

What exercising does is burns off the adrenaline and sugar buildup, which makes you feel calmer. Exercise has proven to reduce anxiety and depression, two high stress hormone byproducts.

Exercising has proven to have the same effect as antidepressant medication to cure anxiety, the only difference being that exercising takes longer to kick in, but it releases the same chemicals in the brain, with no side effects.

Exercise And Meds
A study took two groups who experienced bouts of depression. One group was instructed to begin an active daily exercise routine, while the other group was prescribed antidepressant medication.

Although there was quicker improvement for those who took the drug as expected, but in a few months, the exercise group eventually caught up, offering equal recovery symptoms.

Exercise Protects The Brain
Exercising has shown positive results to strengthen the brain and the adrenal (stress) system. What high levels of cortisol does is it damages the brain, especially the hippocampus.

The hippocampus is the area of the brain that’s responsible for our emotions and memory processing. It’s also known to actually shrink and lose cells, this once it’s overexposed to cortisol.

What’s shown is that exercise can actually reverse this shrinkage, as well as help create new brain cells, which calms us down and relaxes us once we get overexcited or nervous.

It’s proven that not only does exercising grow new nerve cells, it creates the brain cells which releases calming neurotransmitters, especially GABA, which is usually artificially increased by taking anxiety medication.

Exercises Which Reduces Anxiety
What’s known is that any type of bodily movement, pretty much any form of exercising has the ability to reduce stress, anxiety, and depression related symptoms.

So what it comes down to is doing what you like based on what your fitness levels are. When starting any exercise program, there are a few pointers to keep in mind.

• Do something that you enjoy doing, as it’s been proven that if you don’t like it, you most likely won’t stick with it

• Always begin slow if you haven’t exercised in a while. Always check with your health adviser to make sure that the exercise is right for you, and go easy, this to avoid injury

• Mix things up, as studies show that balancing cardiovascular exercises along with strength training are the most beneficial. What’s recommended is altering the exercise forms on a daily basis

• Consult with a personal trainer, as initially working with one is money well spent, this to find the most efficient exercises for you, while doing the techniques properly to avoid injury

• Exercise outdoors as often as possible, as doing so has superior anxiety busting effects, as the fresh air and sunshine enhances the day

• Exercising is fortified even further once you learn to appreciate it. So slap on some headphones and listen to your favorite music, as it boosts the enjoyment even more

When Under Pressure Just Move Your Body
Our bodies are designed for movement. What creates the perfect balance, this once you feel stressed out, as anxiety bites, when life gets you down, is that exercising can be the great equalizer, adding meaning to your life.