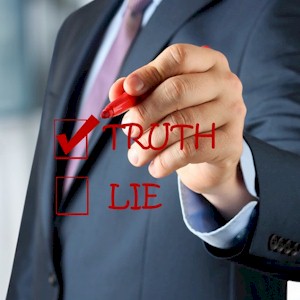 There’s constant deception when it comes to the selection process, this when searching for the ideal employee. There’s currently no better method than interviewing, putting the candidate in the spotlight, asking questions to find if they’re suitable for the job.

During this process, the deception extends mutually. Both sides will tell little “white” lies. But who’s more prevalent, the one who’s being interviewed, or the one who’s conducting the interview. Telling these “untruths” can prove incompatibility.

Certain lies can evolve into becoming bigger concerns. What’s also important is the job being interview for. An interview for a Surgeon’s position is obviously different from interviewing for a factory worker’s position.

During the interview process, both sides will usually be forced to somewhat skirt the truth slightly, this for a variety of reasons.

The Skill Of The Deceit
The accomplished “liar” can take on a host of characteristics, a skill that’s developed. The best are those with natural acting ability or are sociopaths. Their ability is to convey just the exact degree of timed emotional expression.

They don’t show stage fright when confronted with the moral issues which are objected in interviews. They’re also found to be more physically attractive in general, as that’s a trait usually judged to be more honest and open.

Attractive people also have more confidence and are fluent in the social gab. Most are competitive, enjoy the thrill of the chase, the test of wits during the interview process.

They are able to be deceptive, especially if the interviewer is inexperienced. They know how to appear on the right side of being trustworthy.

Telling Little White Lies
What’s constantly told are harmless yet detracting little statements which are found to subtly exaggerate the truth, this when it comes to the applicants cover letter.

“I’m a totally dedicated and committed team player” or “I have exemplary social skills along with the ability to read people accurately” or “I’m completely trustworthy and a loyal employee.”

The question remains, who says so, where’s the actual evidence of these stated character traits. It’s found better to just ignore this self-inflating “filler” to pump oneself up, and be more genuine.

Small “Cover Up” Lies
They’re altruistic in nature, as an attempt to cover up minor faults, which can appear like they’re attempting to help someone.

During the interview, rather than telling the absolute truth, such as they left their last job because the boss was a tyrant, or that the company didn’t pay on time, they’ll just say that they quit to look for new challenges.

Telling Little Fibs
These may be the most convenient thus being the most common and more frequent of lies. Most will always omit or alter minor details of their schooling or university grades, this since the grades may of been bad.

Or entire years of their life could be obfuscated. The most common lie being not recording dates accurately. They’ll often exaggerate or extend dates of employment to cover up for lapses in time, or because of a succession of smaller jobs. It becomes obvious that they’re concealing something.

Lies That Are Defensive
Defensive based lies are cloaked by generalizations or vagaries. Ask someone about the previous management style of their past employer, why they left, their state of health, and the response is a vague expression.

Responses such as “good, okay, everything’s fine.” They become extremely defensive, indicating that they’re outright lying or trying to hide something.

All others who were in the hierarchy of those accomplishments aren’t credited. It also becomes difficult to establish the facts on who exactly was the person responsible for the particular success, so at times, they’re given the benefit of the doubt.

Lies Which Are Embedded
These are clever subterfuges designed to confuse the interviewer. “I really enjoyed working in England” could be referring to their first job as an intern for two weeks as a transfer student.

The idea is to suggest that there was a certain experience, achievement, or qualification which is usually completely exaggerated, and different from the actuality.

“It was an extremely enjoyable experience, my time spent with CNN” could mean that they were in the studio audience, to they took a one day tour during film school.

Errors In Facts Or Omission
This is the ultimate lying skill. They are completely explicit, veritably obscene and are outrageously false claims, such as claiming qualifications that one doesn’t have.

This could be working for companies or job positions that didn’t exist, or skills which they don’t have. It’s the most blatant form of lying, one’s where they’ll surely be exposed to.

Lies Of Definition
This is the choice of “lie” for professionals such as lawyers, politicians, or any public figure who needs to distort the truth. What exactly do they mean when they say, “I was responsible for the company turnaround.”

What these lies of deception involves is flirting with extremely specific or obscure definitions, this for the intent and purpose that they appear to be telling the truth.

Lies By Proxy
This is where they’ll convince others to lie for them. This in the form of references, but could also be past coworkers or teachers, or they skirting with the poor memory of former employers, or other bribes which persuades them to obfuscate.

Rule Number 1: Everyone Lies
So be vigilant, know the different forms of lying, know the rules of the interview process, and flush out the truth. Never assume that everyone, including the interviewer is being honest.

Many interviewers will say things about their company which are untrue. “We invest a lot of time in training” or “We like to promote from within” or “We have four other candidates that we’re interested in.” It becomes a two way street of deceit.